Khurshid in trouble, EC sends letter to President, she directs PM for action 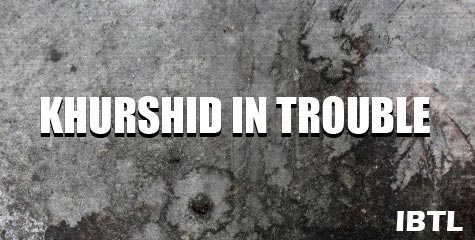 Union Law Minister Salman Khurshid is now bearing the brunt of his irresponsible remarks. He had said that Sonia Gandhi had burst into tears on seeing the Batla House encounter's photograph implying its fakeness, thereby contradicting the government stand. He also said that he sticks to his minority quota remark even if EC hangs him till death. The remarks had created uproar all around and BJP had raised the issue with the Election Commission. Consequently, Election commission shot a letter to the President requesting to intervene. Following this, the President has directed the Prime Minister to take necessary action. It'd be interesting to see as to what action is taken. Still 5 phases of elections are pending in UP and sacking Khurshid can cost dearly to Congress as it'd lose Muslim votes. Keeping Khurshid would be tantamount to dishonouring the President and the Election commission. All in all, Congress has scored a major self-goal with the incident, with social networking sites abuzz with the the talk that Sonia's imaginary tears are now going to be real when UP election results come out.

This is the first time in the history of Election Commission that it has taken such a step of writing to the President against a Union Minister. Below is the full text of the letter that EC sent to the President.

The Commission is approaching you with serious dismay and a deep sense of urgency that requires your kind intervention in the midst of the poll process in the state of Uttar Pradesh.

The Union Minister for Law and Justice and Minority Affairs, Salman Khurshid, who is also a leader of the Indian National Congress Party, had made certain statements and announcements during the course of his campaign in the state. One of them was to the effect that the Congress would provide a quota of 9 per cent reservation to the minorities within the existing quota of 27 per cent for OBCs. He also indicated that Muslims having a sizeable population will be benefited from this move.

Following complaints received from a political party that such announcement was a violation of the Model Code of Conduct, the Commission, after due notice and hearing, passed an order on 9th February, 2012 that Sh. Khurshid had indeed violated the MCC. The following are the relevant observations contained in the Order: "The Commission, therefore, cannot help expressing its deep anguish and disappointment over his violation of model code of conduct. As a Union Minister for Law and Minorities Affairs, he has an added responsibility of ensuring that the model code of conduct is observed in letter and spirit so that elections are conducted in a free and fair manner and all political parties enjoy a level playing field in the matter of their election campaigns.

In the above circumstances, the Commission hereby censures Salman Khurshid andhopes and expects that such violations of model code of conduct would not be repeated by him in future."

Sh. Khurshid has been seen in television media today (11th February 2012) making statements to the effect that he would pursue the line of his earlier announcement irrespective of whatever the Commission directs. In fact, the Union Minister goes on to say that he would stick to his line, "even if they hang me". We have found the tone and tenor of the Union Minister dismissive and utterly contemptuous about the Commission's lawful direction to him, besides the fact that his action is damaging the level playing field in the election.

The above response of a Union Minister and that too, the Law Minister, to the Commission's decision in a MCC case has created a disturbing situation. The Commission is shocked that instead of being remorseful about the violation of the Model Code, that carries the consensus of all political parties and the sanction of the Supreme Court, the Minister has chosen to be defiant and aggressive. This is unprecedented. The full Commission hence deliberated on the matter in an emergency meeting, this afternoon, while being concerned about the fact that Sh. Khurshid's action could vitiate free and fair poll in Uttar Pradesh. The Commission is perturbed because the undermining of its constitutionally mandated duties has come from the Law Minister who has a direct responsibility to uphold and strengthen the ECI rather than to denigrate it. Hence, we find the immediate need to draw attention of the executive to the fact that the onus of holding free and fair polls falls on all organs of the State. The Commission is quite concerned that the delicate balance of functions between constitutional authorities has come under a strain, because of the Minister's improper and unlawful action.

The Election Commission of India finds it necessary and unavoidable to turn to you at this juncture for immediate and decisive intervention so that the ongoing general election to the Uttar Pradesh Assembly is conducted, and this Commission discharges its functions, in accordance with the Constitution and the law.