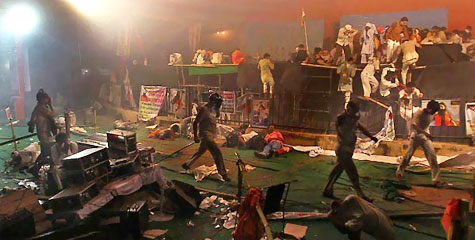 Dr. Subramanian Swamy has asked Mr. P. Chidambaram to resign immediately, taking responsibility for the reckless avoidable violence by the Delhi Police at Ramlila maidan on 4th June. The Janata Party president has issued a press release to this effect. The release is published below as is:

I demand that the present Home Minister Mr. P. Chidambaram be asked to resign immediately, taking responsibility for the reckless avoidable violence by the Delhi Police which violence was committed on his orders.

While the Supreme Court may have made remarks about the moral duty of Baba Ramdev to minimize the casualties, the core of the Supreme Court Order is that the Police action was against the fundamentals of democracy, represents a gross violation of fundamental rights and a massive abuse of police powers.

Police would not have done this unless they were asked to do so and hence Mr. Chidambaram bears full responsibility for this. Therefore he must either step down on his own or the Prime Minister should have him dismissed.