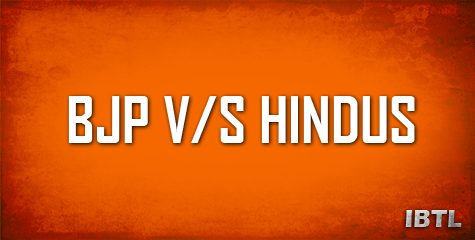 Disclaimer: The aim of this article is not to offend any religious sentiments, but to highlight an interesting analogy that exists in present-day political arena and historical traits of major religions. The author has absolutely no intentions to identify a political party with any specific religion, but to only underline a pattern of similarities.

There is a common refrain in the popular media – “BJP has a problem of plenty”. That BJP does not have one supreme leader, but a plenty of them, and they’re in confrontation with each other, is what we are told by the media. This is quite unlike the Congress where there is one supreme authority, whose word is everyone’s command. Anyone, who’s challenged her authority, has either been eliminated, or rendered into political oblivion.

One: Now, this is where we find the analogy. Hinduism – one God, many manifestations, so many deities. Likewise, BJP, one ideology, but so many leaders. In contrast, recall the signatures of Islam/Christianity. “There is no God but Allah and Mohammad (PBUH) is the prophet of Allah” or “In God we trust” and “Jesus is the Son of God”. Present day Congress appears to be fully in-sync. There is no supreme commander other than Sonia Gandhi and Rahul Gandhi is the heir, the ‘yuvraj’, and every Congressman must follow them.

Two: Just like evangelical Christians want to bring the entire world to Christ, and just like Islamists want to establish Dar-ul-Islam in the entire world, Congress strives to once again be “the natural party to rule India”. That was the case post-partition, and that was what, in 2009, Sonia Gandhi, after getting 200 seats, looked forward to. The Islamic history of forced conversions, or the Christian history of not sparing even the scientists because they opposed the church, finds a parallel in Congress’ history of subjugating Indian democracy, be it the emergency imposition, or India Gandhi’s act of dissolving so many Janata Party state governments as soon as she rode back to power in 1980. This is in contrast with Hindus satisfied with their homeland, and BJP often satisfied in being a ‘responsible opposition’.

Three: Interestingly enough, while Hindus take immense pride in the innate inclusiveness, it is them, who find themselves at the receiving end of a ‘Communal Violence Prevention Bill’ draft. When you hear the word ‘communal’, the words that strike your mind are all Hindu organizations, Bajrang Dal, VHP, RSS, and of course, the BJP. This is when it is no secret how billions of dollars are invested in India every year by proselytizing Christian missionaries who have been reprimanded by several court judgments for denigrating Hinduism and Hindu beliefs, for distributing hate-literature, and what not! This also, when there is no dearth of examples to show present-day Islamic intolerance in mainland India, from Kashmir, to Bengal, to Kerala. Kerala was one state where tributes were offered to Osama bin Laden, and where Sharia courts have been set-up.

This is also similar to how it’s the BJP is always questioned and blamed for riots, while Congress ruled states and centre have a very long history of riots, in different parts of country, of course, not to forget how Rajiv Gandhi almost rationalized the ’84 Sikh pogrom by Congress goons with his “big tree falls” remark.

Four: Now let’s see what’s happening with the religions (and for now, let’s count Hinduism also as a religion for practical purposes). Christianity is the largest religion of the world – in both area and population. Islam is the fastest growing religion in the world. What about Hinduism? It’s decline is a tale in itself. A millennia ago, it was there from Iran to Indonesia. Kashmir was a Hindu land just 700 years ago. Just 60 years ago, Pakistan had around 23% Hindus, now barely 2%. Bangladesh, when created, had around 30% Hindus, now, barely 7%. Hindus are a minority in not just Kashmir and many north eastern states, but are ominously shrinking in Kerala and Bengal too. This is happening in the era of “religious tolerance” and globalization.

Compare it with what’s happening to the BJP. Even in its most glorious days of Vajpayee, BJP’s best was 182/543. With Vajpayee as PM candidate in 2004, Congress outperformed BJP. This is when we say, educated middle class votes for BJP, urban voters vote for BJP, and India is getting more and more educated, more and more urban, still BJP is declining, or steady at best.

Five: Hinduism is often accused of Casteism, while it is irrefutable that Hindu scriptures DO NOT support birth-based classes. Varna-vyavastha was essentially profession-based as propounded in scriptures. But the fact that Muslims too have so many classes, and so do Christians, so much so that their graveyards and even churches are separate, is often suppressed. This is again perception v/s reality, an interesting case that applies to the BJP/Congress comparison that Narendra Modi once made. Modi, while responding to a question, highlighted, how in Congress, leaders of similar stature could never work together, be it Gandhi and Lal-Bal-Pal, Nehru and Sardar Patel, Indira and Morarji, and so on, in BJP, Vajpayee-Advani worked together for 5 decades! But the perception was always created contrary to the reality.

Six: Just as despite all the competence, BJP underperforms, and despite all its misgivings Congress outperforms it, Hindus, despite being a majority, remain in disarray, while Indian ‘minorities’ know how to get the balls rolling their way. And in spite of that, just like Hindus live in the delusion of “kuch baat hai ki hasti mitati nahi hamaari” even while they’ve shrunk and shrunk in area and influence, so much that they have to wait for over 6 decades after Independence to build a Ram temple at Ayodhya, similarly, BJP supporters and workers live in the delusion of a BJP sweep in 2014 under Narendra Modi, or take sadist pride in Congress’ rout in Uttar Pradesh, while conveniently forgetting that they actually increased their seats, while BJP declined in both the number of seats, and vote share, despite having Uma Bharti at their side.

A little observation thus reveals how the issues with BJP are similar to the problems Hindu society faces. Those, who respect Hinduism, and/or are concerned for BJP, should spare a thought to the method, the pattern that’s there. Often, correlation is not causation, but sometimes, it is!