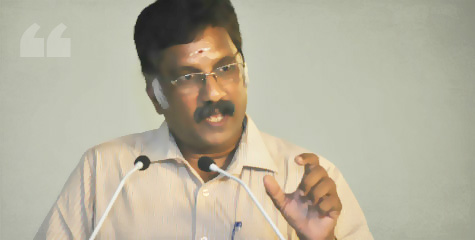 Ramnathi, Ponda (Goa) : Hindu unity that is going to result from the All India Hindu Convention is going to be an achievement to be proud of. To be able to do that Hindu organisations should put in spirited efforts. The Indian media, under the pretext of Secularism, repeatedly attacked the religious customs, traditions, Temples etc. which are the conservators of the Indian culture. The media has become eager to destroy the Hindu line of thinking from India. These views were expressed by Mr. B.R. Haran on the last day of the All India Hindu Convention. He was speaking on the topic of ‘Hindus and the Media’ !

During the speech, he gave some examples to prove the point as followed
# Repeatedly defaming Shankaracharya, Dharmacharyas, Chiefs of sects, Saints, Mahants along with Sabarimala, Amarnath Temple, Kanchi Kamkoti Peeth, Jagannath Puri etc.

How should the code of conduct for the media be ?
# Do not give entry to Political parties or the Politicians in the media

# Do not publish the investigative articles without proofs.

#  There should be a selection committee for advertises.

# Those news items that disturb the communal harmony should be banned.

# The educational organisations being run by the Hindu sects should include course in journalism in the curriculum.

# Through the medium of this system exchange the news and disseminate throughout the Nation after translating them in local languages.

# Provide full help for those Hindu organisations who wish to start a periodical.

# Exchange the contact numbers of devout Hindu journalists and make the union strong.