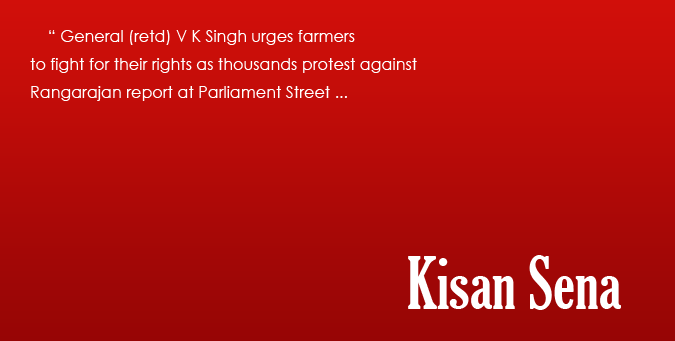 New Delhi: Thousands of farmers from North India protested against the Rangarajan Commission report on ‘Sugar Sector Regulation’ at Parliament street in New Delhi. The protest was led by General (retd.) V K Singh, V M Singh, Convener of Rashtriya Kisan Mazdoor Sangathan and many prominent farmer leaders and civil society members. Farmers from all north Indian states were present in large numbers in the protest. Farmer organizations from Tamil Nadu and Kerala also supported the call of protest and came to Parliament street to express solidarity with the cause. INLD leader and former Chief Minister of Haryana, Om Prakash Chautala also addressed the farmers and expressed his support for the cause. Actors of Asmita Theatre Group led by Arvind Gaur also performed at the event highlighting the plight of farmers through their songs.

Speaking at the protest, Convener of RKMS, Shri V M Singh said that, ‘we had come here (Parliament street) with a mission and the mission was to tell the Parliamentarians that we do not want Rangarajan report to be implemented. Since the farmers have benefitted through the legal system for last 20 years, to the tune of over Rs. 30-40 thousand crores, we want the same system to be continued and not decontrolled as suggest by Rangarajan report. The report is anti-farmer and the farmers have in their wisdom burned an effigy of the same in an attempt to get the report off their system.’

Singh also said that, ‘having believed in the legal system it not appropriate to break the cordons and enter into an illegal act, therefore the farmers have passed the resolution that if ever the report is ever implemented, they would seize the boat club and lakhs of farmers will squat there till such time that the said law is again amended.’

Shri V M Singh also suggested that to deal with corruption related to purchase of grains at Minimum Supported Price (MSP) the farmers need to establish a ‘Kisan Sena’ and having General (retd) V K Singh in their fold, he would be the ideal Commander-In-Chief. The ammunition used by ‘Kisan Sena’ would be the legal system such as lodging FIRs and approaching court for logical conclusion of cases.

General (retd) V K Singh who has been championing the cause of farmers told the farmers gathered at Parliament Street that they must fight for their rights. Singh said that, ‘in an agriculture-economy like India, farmers are the major sufferers and committing suicide at an alarming rate. This does not bode well for the nation.’ Singh said that the country must pursue the slogan of Jai Jawan, Jai Kisan given by Late Lal Bahadur Shashtri for a change in the pitiable condition of farmers. He also promised to consider the proposal of formation of ‘Kisan Sena’ mooted by V M Singh.

Rangarajan Report, if implemented, would have an adverse effect on the farmers of Uttar Pradesh, Uttarakhand, Punjab, Haryana, Bihar and Madhya Pradesh as the Report has recommended that the State Advice Price issued by the States is stopped and the reservation of the areas is done away with and that these amendments are made in the Sugarcane Control Order, 1966 to that effect.

The truth is that the Commission has acted only on behalf of the Sugar Mills and ignored the farmers’ interest, whereby farmers who are already in a miserable condition will face more hardships. A request is being made to reject the Commission’s Report vis-à-vis the Northern States or else the farmers would have no other option but to resort to agitating by coming on the streets.