Face The Facts On Riots, The double standards of pseudo-secularists 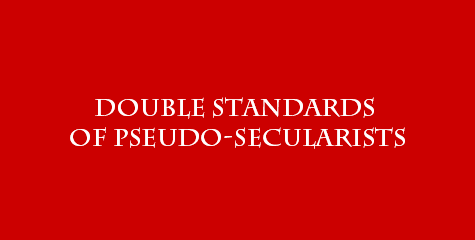 The double standards of pseudo-secularists have caused immense damage to policymaking on riots.

We need to sober down and accept the facts on riots. On the streets, riots are brutal, bloody and brazen. In our thoughts, they are irrational, irritating and irreconcilable. As for discussions on riots, they are between the deaf.

It is indeed an irony that the facts about riots in India in different places are similar in terms of ground realities. The responses from different administrations at different times are widely comparable. Comparable too is the absence of conviction to learn from inferences drawn each time, even after commissions of inquiry submit their reports.

What is remarkably different, however, is the double standards adopted during public dialogue, discourses and debates, in fixing accountability. Several self-appointed purveyors of rights and justice have gone around poker-faced with elastic yardsticks and skewed arguments, causing immense damage to policymaking. As a nation, are we afraid of facing the facts? Why do we accommodate double standards put forth in the guise of objective analysis?

RIOTS OVER TIME : An attempt is made here to compare the observations of enquiry commissions that have probed major riots since 1969. The Tiwari Commission Report, submitted in 1984 to the Congress Government of Mr. Hiteshwar Saikia on the Nellie massacre, has not yet been made public. On post Godhra, the Nanavati Commission is yet to submit its report. The commissions of enquiry set up to probe major riots since 1969 are as under:

If we compare the death toll in each of these riots, we find that the Delhi riots left the highest number of dead. Every life is precious and nothing can justify the death of a citizen, under any circumstances. Here, therefore, the death toll is used only to highlight the extent to which riots spread, or underline its intensity.

DELAY IN CALLING ARMY : Imposition of curfew in the affected areas is a critical step to keep troublemakers out. But commissions have highlighted how outlaws everywhere thrive during such deathly hours. While in Mumbai curfew was “…a farce...did not deter mobs from moving about…” in Bhagalpur, “police were afraid of violators”; and in Delhi, “mobs indulging in violence were moving freely...looting and killing also freely.”

The Army is called in because its sheer presence brings a great sense of security. And, hence, the sooner it is brought in, the better.

Post Godhra, within 24 hours of the outbreak of violence, the Army was airlifted from near the border with Pakistan. Riots began in the afternoon of February 28, and the Army was deployed in all the affected areas by 1100 hrs of March 1. Whereas, the Srikrishna Commission says, “Four precious days were lost for the Chief Minister to consider and issue orders as to effective use of army for controlling the riots.”

In Delhi, the riots began in the evening of October 31; the Army was not deployed till later on November 2, 1984. The Army took a day further to become effective in some areas.

Army deployment can become ineffective due to various reasons. In Mumbai, it was observed that there was “...no coordination between the police and the army...found police actively participating in riots and communal incidents.” In Bhagalpur the Army was “...obstructed and inhibited by civic interference...” “...appointments, transfers and postings had created chaos in not preventing the holocaust”. It went to the extent of implicating the chief minister himself “for frustrating the DG's efforts...” The commission holds the Bhagalpur police and district administration responsible for not only their failure in controlling riots but also for “their involvement and anti-Muslim stance”.

In the 1992 riots, the then Chief Minister of Maharashtra was blamed for specific omissions of duty. The Srikrishna Commission said, “Despite clear clues, the miscreants were not pursued, arrested and interrogated...” In contrast, the Gujarat State Government had included the role and conduct of the Chief Minister and ministers in the ambit of the Nanavati Commission.

AFTER THE RIOTS : There was a recent expression of outrage over missing call records in Gujarat. The concern was justifiable. The state Government explained that during the course of the nine years, all the required documents had been submitted to the various commissions. In contrast, the Srikrishna Commission observed: “Commission was surprised that the audio cassettes (containing transcripts of the Control Room) for December 1992 were not available, though the Commission itself was constituted in the third week of January 1993.”

In Delhi, the Nanavati Commission observed the police “...recording general, vague and omnibus type FIRs”. In Bhagalpur, 688 cases were filed. As many as 378 cases were closed for want of evidence. About Mumbai, the Commission pointed to “the practice of classification of offences being used as a tool by the police to short circuit investigation — 55-60 per cent of the riot-related cases appeared to be classified as ‘A' summary= True but undetected”. In post-Godhra, after a court intervention, ‘A' summary cases were re-opened, too. Nellie victims received only Rs 5000 for each dead as compensation whereas, post-Godhra victims received Rs 5 lakh and Delhi riot victims got Rs 7 lakh each.

Invariably after every major riot, serious attempts were made to learn from our mistakes. However, after every major recurrence we hung our heads in shame, unable to answer why we couldn't prevent the next! Simultaneously, there were attempts to strengthen our statutory and Constitutional institutions so that they could meet challenges in keeping with the changing times. The uniform absence of political will to usher in comprehensive police reforms, speedy and effective prosecution, convictions after due trial are confronting us uniformly from various states.

s a result, even major recurrences could not be prevented, be it in Assam or Gujarat, Mumbai or Delhi. Now, for nearly 10 years there has been no communal riot in Gujarat. Unfortunately we have had reports from Bharatpur, and earlier from Hyderabad. The Chief Minister of Gujarat submitted himself to be questioned. Yet, there is a concerted attempt at getting him, rather than securing justice for the victims. The silence of the pseudo-secularists on suppression of the Tiwari Commission report on Nellie, and the pittance given as compensation for the victims of Nellie, exposes their hypocrisy.