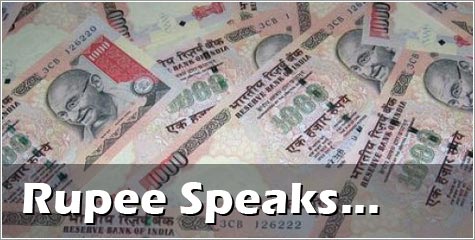 Long term India story remains intact. India is the 2nd fastest growing country in the world. US is not growing and eurozone is extremely uncertain and in such a scenario the world is looking up to India and China. We have all heard these numerous times and most of us are firm believers of these statements. I am firm believer in all of the above and have never had any element of doubt regarding any of the above statements, except when I look at the behavior of rupee over the last few months:

Rupee vs some currencies Since Jun 2011

Why would large institutional players in there right frame of mind sell the currency of the country with the 2nd fastest GDP growth. Infact, a report by a very well respected financial services firm (amongst the largest in its domain) projected India’s GDP growth to exceed China’s by 2013. Why would the rupee decline against all major currencies in such a scenario? What explains the decline of rupee against euro?

My best guess is that world is taking note of the existence of some bumps in there rosy ride to the “Great India Story”. People are realizing that not everything is as hunky dory as it was made out to be. In my opinion, there are some real risks which pose a serious threat (not just a bump) to the India Growth Story in the short to medium term:

Quality of Leadership
The current leadership in the country just refuses to move and act. It is beginning to be seen as ineffective, clueless and possibly incapable. People incharge have either become complacent or are inefficient. We keep reading statement about policy measures being on a standstill and the government seems t be dragging its feet on more than one issues. The Prime Minister is seen as weak, his current boss is sick, future boss is probably seen as somebody lacking direction. The other leadership alternatives are not very encouraging. An outsider, can possibly see it as a vacuum situation. This is not what people had in mind when the investors gave a huge thumbs-up to the 2009 lok sabha election results (recall stock markets being locked in upper circuit because of election results)

Corruption
CWG scam has globalised India’s domestic issue of corruption. We were never the best country  in any of the corruption rankings published, but CWG truly showed the world what we are truly capable of in the highly competitive field of corruption. It helped put corruption in public life in India in global spotlight. Other scams which followed immediately have not helped and probably played spoil sport, more due to their timing than the scale and magnitude. Anna’s anti corruption movement and the government’s inept handling of the same probably made things worse.

High Inflation
Domestic Consumption – probably the theme most commonly used by Investment advisors and bankers to sell India story to investors is at risk in the short to medium term. Infact, the report I mentioned earlier mentions that the domestic Indian market is suppose to cushion the impact of the eurozone debt crisis on India. My understanding of domestic consumption market is increase in spending by common people like me (supported by rising income levels). With inflation refusing to budge & the average consumer reeling under high prices of basics (food and real estate which is roti, kapda, makan), I wonder who is consuming & how long can such consumption last? An average household with normal income levels is struggling to make ends meet and the lucky few with 6 or 7 digits monthly income will sooner or later start saving for difficult times ahead. What happens to the Great India Consumption Story in such a scenario?

All of the above are issues which individually should not pose a long term problem. But, in combination with each other they threaten to present serious road blocks to the India Growth story. Infact, one is probably leading to the other. Lack of leadership is fueling corruption, which in turn is probably contributing to rise in inflation. With living costs rising and honest official is not left with much of an option and which leads to corruption rising.

I am not a pessimist or a non-believer in the India story. Infact, I can see opportunities all around me which is what prompted me to take the plunge into entrepreneurship. But my sense is that not everything is rosy in the short to medium term in India and we need to be a lot more cautious and aware of the risks related to a global crisis this time around. If the world was to go through another major crisis (eurozone default being the trigger), we will not be as insulated as we were in 2008. We escaped with minor scratches then, but if we do not mend our ways, we will probably sustain major injuries this time around.