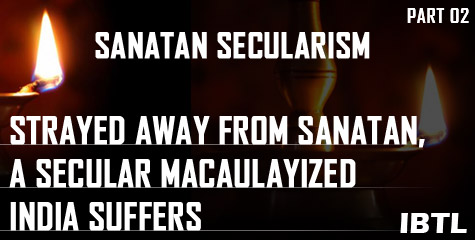 Continued from Sanatan Secularism Part 01 | Now, that opens a question – where is an explicit secularism needed? The answer should be obvious. It is needed where different religions and religious beliefs exist and some point of contention exist among them. For example, if one religion proclaims not only its supremacy over others, but also it’s being the only ‘true path’, and there exist more than one such religions, than to avoid conflicts, a framework needs to be set. However, if there is a set of belief that has existed since time immemorial and is flexible, liberal and inclusive enough, it needs to be protected from those ‘Supremacist religions’. So what India needed was not Secularism as enshrined in the constitution, but a framework instead, which would ensure that already shrunk Sanatan Dharma flourishes unscathed in the remaining territory of its homeland. On the contrary, the deliberate and unnecessary explicit provision of secularism was enshrined with unfair concessions to ‘Supremacist religions’ which had exhibited their hostility towards Sanatan Dharma for centuries. This manifested in separate Muslim personal law and Christian law, government control of Hindu temples while providing autonomy to mosques and churches, taxation of Hindu pilgrimage while subsidizing Haj pilgrimage, government collecting temple donations and spending them on renovating madarasas etc. This phenomenon promulgated with ‘minority appeasement’ and ‘pseudo-secularism’ becoming key tactics for consolidating minority votes and winning elections. The latest in the series has incarnated in the form of Muslim reservation in education and jobs and Communal Violence Prevention Bill which assumes majority Sanatan Dharma adherents as the oppressor of ‘Supremacist minorities’, contrary to the factual reality.

Having walked through all the above, a question naturally arises. Can’t this Sanatan Dharma adherent majority see all this that’s so very obvious, that it needs to be written in the form of an article? The answer, which is a disappointing ‘No’, betrays the very reasons behind it. First, there is a problem of Identity. Unfortunately, Sanatan Dharma adherents in the quest for defending their very existence during tough times of Islamic rule, developed unwanted practices, which are now being used against them. One example should explain the case. Islamic invaders considered it the victory of Islam if they abducted Hindu girls. This led Hindu parents to wed their girls in rather early age to transfer the responsibility of protecting them to the groom. A menace of Child marriage, thus, came into existence. The adherents of Sanatan Dharma, who considered women as an incarnation of ‘Shakti’, who conferred on women the right to choose their husbands (through Swayamvar), became infected with the disease that made women being looked upon as inferior. The tradition of forced dowry as the price to protect the daughters from abductors came into practice. Dowry, child marriage, female infanticide, thus, came into existence.

Another was the caste system – which was intentionally a power-sharing formula meant to ensure a homogenous and equanimous division of resources among different constituents of the society, and had traditionally been occupation based, but due to the entire Sanatan society crumbling under foreign/Islamic rule, became so rigid and associated with birth that it created factionalism in the society. Those with inferior occupation were typecast into the same for generations, and thus became oppressed sections of society. This situation of theirs was exploited by proselytizing missionaries in pre-Independence India, and has been exploited both, by these missionaries and casteist politicians in a post-Independence India. Caste-based reservation which was a short-sighted solution implemented for just 10 years initially to raise the social standing of the oppressed classes, became a tool in the hands of politicians which they can use to win elections. The classic ‘divide and rule’ formula which the British taught Indian politicians, has been duly exploited by them in dividing the Hindu society in the name of caste. The reservation later got extended into jobs and education for SC/STs and then for OBCs by V P Singh and Arjun Singh, hardly with any real improvement in the situation of those classes in sight. 2 generations of these classes have been fed with a dose of identity separatism by selfish political parties and missionaries which are sworn enemies of Sanatan Culture and take utmost pleasure in denigrating the same. Religious conversions have run unabated all these years and a big chunk of these oppressed classes have been converted into Christianity and antagonized from their Sanatan roots.

A solution to this problem does exist, and has been practiced and propagated by those who’re committed to the resurgence of Indian pride and Sanatan values. Unfortunately, hard-wired with the Macaulayized education system, which founds on denying the Sanatan value system and a common identity for Indians by promoting Aryan Invasion theory among other things, the educated elite often gets swayed into terming those very people who try to unify Sanatan Dharm adherents, as communal. Most of these educated elites do this naively and innocuously but it harms the efforts of Sanatani nationalists. In the guise of secularism, some not-so-naive educated elites implement their vicious plans of destroying the remains of Sanatan value system by nullifying the unifying attempts of these nationalists and label them as communal. For this, they resort to every trick in their bag, from distorting facts, running a smear campaign, expunging history, even writing fiction in the name of history and refusing to acknowledge parts of history, disputing well-known facts, insulting national icons like Shivaji and Sawarkar as communal, terming ‘Vande Mataram’ and ‘Bharat Mata’ as divisive and what not!

The naive educated considers these flagrant attempts as defence of liberalism, and unaware of both, the salient foundations of Sanatan Dharma, and what sets it apart from ‘Supremacist religions’, sings in chorus the accusations of Sanatan nationalists being ‘communal forces’ with their favourite punch line, “All religions are equal” and their programmed faith in an explicit ‘Secularism’. No wonder, Secularism’s demon engulfs the practices of singing Saraswati Vandana (which is so fundamental to Indian culture), as it engulfs the practice of lighting the ‘Deepak’ while opening a program. With ‘liberal educated Islamists’ like Zakir Naik openly preaching how ‘touching feet of your parents is an insult to God, not only as per Islam, but also as per Hinduism’, and opposing Zakir Naik being synonymous to being communal, it’s going to get from bad to worse.

Ironically, celebrating imported ‘festivals’ like Valentine’s day, Chocolate day, Fathers’ day, Mothers’ day etc. assumes the tokenism of being ‘modern’ and ‘forwards’ in this “Secular Macaulayized mindset” (SMM) , and being wished on Indian New Year or on Basant Panchami by any Sanatani Nationalist becomes a token of orthodoxy or even narrow minded stubbornness. Quashing religion and adopting spirituality could be another fanciful symptom of SMM, and so could be criticising any nationalist movement with Sanatani undertones as communal. So while SMM justifies religious conversions in the name of “improving the living standard of the underprivileged”, similar improvement drives run by saffron-clad Sadhvis and Sanyasis become symbols of Communalism, so much so that self-styled anti-corruption crusaders who run to an Imam who calls for not-saying-Vande-Mataram, refuse to share dais with one such saffron-clad social worker. The patients of SMM would be ‘liberal’ enough to consider Ramayan and Mahabharat as ‘beautiful epics’, albeit fictional, but would argue to the best of their intellectual abilities to defend any question posed at the Quran or the Bible, citing ‘religious sentiments’. Sadly, for such brothers and sisters, India is characterized only by a few decade old tri-colour, and the saffron flag that characterized this land for numerous millennia, is a mere symbol of Hindu communalism, no matter if Shivaji, under that Saffron flag, established a ‘Secular’ empire.

The above are just few of the many symptoms that characterize an educated Secular-Macaulayized-Mindset. The solution is essentially to return to our roots, to acknowledge the fact that India is not something that is defined by our constitution and characterized by our tri-colour. India is essentially Bhaarat, Aryavart, whose soul is Sanatan Dharma, and when I say that, by virtue of being an adherent of Sanatan Dharma and enriched with Sanatan Sanskaars, I encompass Muslims, Christians and non-Hindus in this blanket, with just one mission of letting them shed their misgivings towards Sanatan culture, a culture one that their ancestors, few generations ago, also enriched. It is the teachings of Bhagwad Geeta that reveal the secrets of a successful and stress-free life, the Ramayan always illuminates the path with exemplary human virtues. No artificial secularism is needed in an India that understands, absorbs and practices Sanatan values. Sanatan Dharma doesn’t stop at religious tolerance, it goes beyond, to teach acceptance, and even reverence of other faiths, but it also teaches to defend the truth, and its sanctity. Time for us all, to shed away the Macaulayized mindset, start afresh, look beyond the injected dogmas, and feel the Sanatan sanctity, for the onus is on us to defend this beautiful heritage, and resurge Bhaarat to the golden glory, where we will again be ‘Vishwaguru’.