Narendra Modi given Clean chit again, this time by SIT 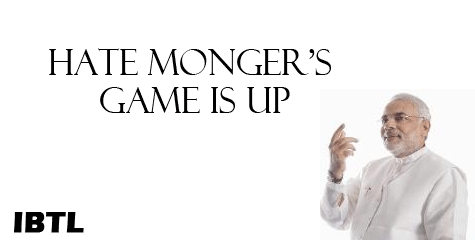 Finally, the cat is out of the bag. The Special Investigation Team (SIT) set up by the Supreme Court to investigate the role of Gujarat government and Chief Minister Narendra Modi in particular in the communal riots of 2002 has in its closure report made some telling points on the propaganda that has been unleashed for over a decade against the BJP government in the state.

The findings may not be surprising as it was quite clear throughout the last decade that some of the most powerful religious lobbies were at full play to bring down the BJP government in Gujarat, and their frustration at Modi’s invincibility election after election was reason enough to employ various questionable tactics in the courts of law.

First, the SIT report clearly mentions that neither Chief Minister Narendra Modi nor the Gujarat government can be held for conspiracy in the communal riots of 2002. This was the main charge levelled against the state government by almost all the opponents in the courts, including the social activists, political parties, riot victims and even a section of the media.

The propaganda against the state government was so powerful that even the media was carried away by it. Now it has come to light that many of the social activists as well as the NGOs were directly funded and supported by Muslim organisations and governments in West Asia.

Though the feelings of the riot victims are understandable, the NGOs used the tragedy to strike a chord with the victims, and ultimately succeeded in making them play along as per their agenda.

The second contentious point which has been cleared by the SIT report is that there has been no laxity or negligence on the part of the state government in controlling the raging riot following the mass killing of Kar Sevaks in Godhra by a Muslim mob.

Only in the morning the Gujarat High Court had asked the state government to pay for the repair of the shrines and mosques damaged during the riots. The Supreme Court appointed SIT headed by ex-CBI Director Dr RK Raghavan submitted the final report to the magisterial court in the Gulbarg Society massacre case on Wednesday.

The findings which fly in the face of the propaganda of the NGOs and state Opposition parties including the Congress make it amply clear how the media reports have been completely swayed by personal agenda of the activists. In case of Congress MP Ehsan Jafri who was killed during the riots at his home, the SIT report states that Narendra Modi had no prior knowledge or any inkling to the goings on in the vicinity which led to the massacre.

Also, after the Godhra incident when the bodies of the Kar Sevaks killed in the train burnt down by the mob were brought to Ahmedabad city, the SIT report says that the government’s decision was right as Godhra was not the right place to keep the dead bodies. Cold storage facilities were available only in Ahmedabad. The victims who died in the train belonged to Ahmedabad and it was the only obvious for the government to bring the bodies to Ahmedabad. The bodies of the Kar Sevaks were not paraded for any public display, but were transported in the dead of night to prevent any adverse reaction from the Hindu community, SIT avers.

All these measures go to show the sagacity of the state government in controlling the situation and employing sensible ways of administering a highly sensitive situation. Incidentally, during the investigations Supreme Court even went to the extent of withdrawing any monitoring of the investigations by the SIT because it had complete faith in it.

But more than all the hype over the clean chit given by the Supreme Court appointed and monitored SIT report was the frustration seen in the NGO circles. When BJP members accused Teesta Setevad of perjury, changing statements, producing false evidence and using the victims’ misery for their personal agenda during a TV debate Teesta Setelvad scurried out of the debate when she had no argument. It was amusing to watch most TV debates with only state government representatives and BJP members as the opposing side has no one to represent them. The game was up and the bluff was finally called by the SIT.