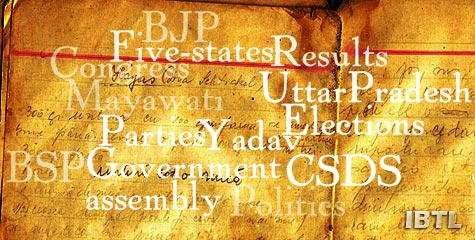 The five states assembly elections have thrown in some interesting & shocking results. The shocker evidently came from the state of Uttar Pradesh. A clear mandate of 224 seats to the Yadav father - son duo was predicted by another Yadav in Yogendra from CSDS. Yogendra predicted a 232 seats minimum for SP and it has come true to the disappointment of the incumbent government of Mayawati of BSP. The two national parties congress & the BJP have fallen flat. The last two mandates clearly indicate that the two national parties are no more relevant players in UP politics.

In the run upto the UP elections the media was occupied with stories of Rahul Gandhi & his new image as a tough young leader making inroads into the UP electorate. The media gave a thumps up to Rahul & his brand of politics & expected congress to do well this time. In the middle of the seven phase polling Rahul Gandhi invited editors of MSM for an "Off the record" briefing on his campaign. Post this famous episode we saw a media course correction in their narrative. Out of the blue Rahul was no more the angry young man but it was Akhilesh Yadav who was hogging the limelight as new hope of UP and probably the next CM of UP. And the results did come in favor of Akhilesh Yadav. Now what did Rahul tell the editors & why the media narrative changed after that is for the conspiracy theorists to explore :). What is interesting is that this is by far the best result a party has had since the BJP victory in the 90's. For the Samajwadi Party which came into existance in 1992 this is their best outing ever in UP. I wish & hope the father - son duo give a better governance this time around unlike the previous governments of theirs which is known for complete lawlessness.

For Mayawati this result must have taken her by surprise. She was battling anti incumbency but coming down to 80 seats from 206 was indeed a bad fall. She had done well for her own Dalit constituency but neglected the other social groups who were instrumental in getting her the 206 seats in 2007. Looking back she must be wondering if she could have refrained from those statue parks & did some good work for the other social groups who supported her in 2007. But now its too late and people of UP have clearly told her to park her Elephant in her own backyard. Well for the two national parties it was a disastrous outing. The results of Amethi & Rae Barelli shows the end of Nehru family clout in their backyard. The congress paraded the complete family in their home constituencies for an assembly polls, shows their confidence in the heir apparent. Rahul has never won an election for his party. He tried his best in Bihar & was shunned by the people there. In UP he has been shown the door twice now. By rejecting the Nehru Dynasty in the assembly polls the people of UP have taken the first for the much needed change in congress and the country as a whole. Will they repeat the same in the general elections in 2014 is a million dollar question worth waiting.

In 2007 post assembly elections it was widely believed by many that the BJP cannot do worse than what it had done then by getting a mere 51 seats. The part had enough time to rebuild & win back its votes/ base by working at grass roots level for full 5years. The bigwigs of BJP instead of doing that were busy playing power games sitting in Delhi. In June 2011 the realisation struck to them and they parachuted Uma Bharti & Sanjay Joshi to UP in the run upto the 2012 polls. At that time i had written a blog post if this could be the "Nemesis" for Nitin Gadkari. Unfortunately it does seems so now. Uma Bharati could win her seat in which she contested but could not translate her persona into votes as expected. Sanjay Joshi remained below the radar and the result remained below par. The heavy weights in UP like Rajnath, Kalraj, President Sahi, Tandon, Katiyar AND many more have come a cropper again. The loss of Ayodhya constituency in this elections signifies the end of Lotus clout among hindu community in UP. When Nitin Gadkari took over as the president of BJP, the first task he assigned himself was to improve the vote share of the BJP state wide and nationally. But going by the last few elections in states the BJP is losing its vote share barring one wonderful performance by Manohar Parikkar ji in Goa this time. There is complete disconnect between the party president, the BJP Delhi leaders & the grass roots. Kushwaha is one such example/experiment which failed because the leadership did not respect the local leaders like Yogi.

For second time on succession the people of UP have given a strong message to BJP. The Delhi bosses dont seem to get & Nagpur as always maintains its connectivity with the party through a few select individuals. There is need to change this power structure in BJP immediately. Nagpur needs to take some tough decisions. The Delhi power club wings need to clipped in the first place. The contributions of leaders like Rajnath,Kalraj,Ananth Kumar and a few more is well known to every cadre & sympathiser of BJP. Nagpur should take the initiative to gracefully retire the deadwood. They have outlived their utility by a long distance & are now hurting the prospects & the very entity of BJP as a national party. Post UP results the party looks like a glorified version of regional party & not a national party anymore. The media 's hatred for BJP is a well known fact but the Delhi power club is not helping it by sending its sub standard spokespersons for prime time debates which are conducted by channels with a clear modus operandi to show the party & sangh in poor light. The idea of NDA allaince also has outlived its utility. The BJP needs a strong course correction and will need to take some tough decisions ASAP. There is no point in appointing good president who cannot override the tall leaders of Delhi who dictate terms per their agenda & not per party needs.

The people of UP have told Mayawati to keep her Elephant in her backyard for now , but for BJP they have sent a strong message "To pack off the white Elephants" by giving them a lesser vote share than what the party got in 2007.

The people of UP have told Mayawati to keep her Elephant in her backyard for now , but for BJP they have sent a strong message "To pack off the white Elephants" by giving them a lesser vote share than what the party got in 2007. For any National party to come to power in Delhi it will need to get a good chunk of numbers from UP, from the current verdict it looks like BJP is long long way away from reaching Delhi.