Is Delhi becoming the rape capital - why, and what to do? 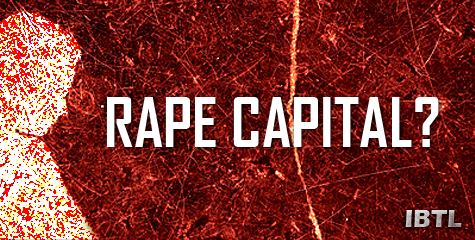 The issue of Delhi (also surrounding areas) and crime against women is bit larger, especially when we discuss the safety of a particular gender in a city - Delhi. The situations arising out of bad parenting and/or self convincing interpretation of female's gestures along with not so efficient governance coupled with dragging judiciary are prevalent in all corners of India. Hence the question arise, then what makes Delhi more unsafe then rest especially when Delhi is resident for Prime minister, President, Most powerful political family (Gandhi), score of MP and other so-called high profile people? Well the answer lies within the question I guess. The presence of these perverts has actually been catalyst to increase the crime. However, Politics is not the epicentre of subdued state administration; it is the Power (money, muscle or fame) that is the centre of devastating incidents. The presence of these unwanted VIPS has degraded the machinery to impotency. I will be honest enough to accept, that I haven’t stayed for long in Delhi, but do have friends and based on close and long discussion with them (both genders included), I am presenting my view on a picture of Delhi in front of me, in particular to the safety of fairer Gender.

Police is no ultra special anywhere else, but the level of inefficiency that has infringed in Delhi state administration is voluminous due to high level hindrance and interference of so called law protector. The idea of getting absolved from crime by calling some MP's or spitting few rupee notes is far more significant. Every girl is not Jessica Lal, rather they should not have a fate of Jessica Lal, but nonetheless her offender did receive punishment ON PAPER (remember parole given by Delhi CM), many unfortunate girls can’t reach to even that extent. Another important point to be pondered is, rape is a NOT just a crime committed by individual or group of individual by forcing intercourse on the female, but it is the entire system who molests the victim by not physically touching but by having apathetic attitude and embarrassing her through ordeal of demonising the victim and glorifying the culprit and the crime. Hence the penalty should be levied upon rapist and also to each and every individual who was in that system that created hindrance to the justice. The supporters of crime, direct or indirect are the real parasites than the one who commits the act of rape, because the criminal thrives in confidence only through support of these scoundrels in the system, be it political, police, media and any other power house.

For pseudo human/woman right activist commenting on rape or rape victim is so very easy and to sympathise with rape victim it’s even more easy and fashionable. But as a society to actually empathize with the victim and to take some constructive steps to avoid it we have hardly any courage to do it and yes I say we including you, me and all others. We hear moral police says gals should not wear jeans or other stuff, we have politician saying if gals wear tight clothes she is inviting for being rape. WHAT SHIT. The idea "Not to rape" is required in the society and not "NOT TO GET raped". Tight clothes or intoxicated gals are no license for heinous crime and also not the character or past deed of women is the free pass.

If Gurgaon administration wants to restrict the movement and freedom of its citizens (read women) so as to act in restraining rapes, instead of women, the administration should kindly take steps and don’t allow MEN to move after 8.00pm, hence by then women will not exposed to possible criminal, does this sound horrendous, if YES, then how come corollary of curtailing women movement is not as obnoxious thought. Also, by actually enforcing rules and regulations on the victims or possible victims, the administration is actually giving two signals -1. Administration is absolving itself from providing security to citizens and 2. The criminals are above the law and intelligence of administration, thus they can’t be even restrained leave aside to think of punishing them. No administrator have actually REQUESTED (yes, requested) to criminals to not RAPE, for this local administrators have no aim or strength to punish criminal, at best they can request.

If The Chief Minister of Delhi passed the buck on society to be mute spectator while the crime of death and/or rape is committed, I would not squashed the allegation completely as others did, for I do believe society has to play active role and not be fence sitters. But for society to act there has to be conducive environment to act, which is to be provided by the state administration, independent of political and power gimmicks. The assurance of police helping the whistle blowers and also rendering security to both alert citizen along with victim is imperative as against current situation of cover up and sheltering the culprits. Sheila Dixit allowing parole of Manu Sharma, the culprit on dubious ground and along with inaction on various other cases have developed a kind of apathy in the society and that is real bad. I would also link the corruption in India and especially by the Delhi HQ of government as one of the reasons, for the corrupt will commit corruption and other illegal activities in alliance with dreaded criminals and not with saint who respects society law and discipline. Once in alliance, Politician has to shelter these criminals against the penalty of crime they commit and hence inaction gives confidence to others for repeating such crimes and giving a spiral effect.

I do agree respecting the women is more required then seeking death penalty for rapist, however, if the rapist are been lynched / hanged in 5-7 high profile rape cases and that too quickly, It shall at least to a extent relieve the pressure. To start with Manu Sharma, who enjoys five star stay should be directly hanged and also the machinery that supported his lavish living should also be booked, as for me it’s not one person who rapes by intercourse, but its entire group of people within and outside system molests the girl even without physically touching. - All the above however is with focus to Delhi considering the humongous crime rate despite the catalyst situation remaining synonym to rest of India.

# Uttar Pradesh voter Packs off (white) Elephants
# Alignment of the regional satraps into Third Front
# Prepoll or Post poll on the Road to Delhi?

As for reducing the crime rate against women, victim should be allowed to PUNISH the criminal in whatever manner she thinks is right without mercy petition going to president. And even if victim wants to forgive the culprit, the court should still persist with the case against the rapist and his supporters, as crime is not against just an individual but against society and generation as a whole. But also equally important is to make life easy for gals after that dreadful event, which can be done by not glamorizing the case by media but by providing fast judgment of death without bail. At least this minute steps can be taken along with the broader discussion in the articles mentioned, so as to reduce 0.000001% of pain of the victim and to restrict reoccurrence of the crime but fitting the fear of quick penalty. At the end I would seek, lets the Process BEGIN.