Dynasty responsible for Congress rout, its beginning, we shall soon see the end! 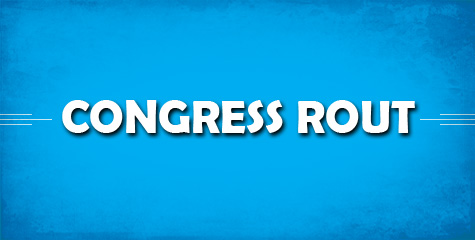 "The voters rejected the Congress in UP,” said a Congress leader a day after the party got a pounding in the state elections. Since Congress has only one leader, you know who I am referring to. Actually he/she was wrong. The Congress was not only rejected in UP, it was rejected in Goa, and Punjab also, and managed to save its skin only in Uttarakhand. But it was not the Congress that was rejected; it was the family. Let me be blunt. Sonia Gandhi and her brood were rejected everywhere and it is only a matter of time before they receive the boot at the Centre.

It is being said that Rahul Gandhi actually saved the Congress from total ruin, and had he campaigned more, the party would have done better. Wrong again. The Congress did badly because of the Gandhis, not despite them. The party was shred to tatters wherever they went. Sonia Gandhi went to Amethi; the party candidate lost. She went to Raibareilly; the party lost there badly. She went to Goa; the party was wiped out there, and could barely manage to survive. Wherever the family went, sometimes with grand children, the party was skittled out. It is time Congressmen realised that the family is a great liability, and if they wish to survive, they must get rid of it.

She was not the only one to be singled out for a thrashing. Manmohan Singh, poor fellow, went all the way to Goa, and that too to my village thirty miles from Panjim, to give a speech. The voters ganged up to make sure he would not speak. They sabotaged power supply and the loudspeakers, and the man had to cool heels for hours, by which time the voters had left. They elected a BJP man, not just in my village, but in the whole of Goa and reduced the corrupt Congress to a toothless rump.

Four people are responsible for the family’s rout: Sonia Gandhi, Manmohan Singh, Anna Hazare and Baba Ramdev. Let us not minimise the role of the last two veterans. Until Hazare came on the scene, corruption was seen as a minor malady, not a plague. He and Baba Ramdev brought corruption upfront and made it into a burning political issue. Since then, all elections have been fought on the issue of corruption, which Sonia Gandhi & Co tried to push into the background.

Manmohan Singh behaved throughout like a babe in the woods and pretended he had never heard of corruption. He even gave a clean chit to A Raja and P Chidambaram, the duo behind the spectrum scandal. A rogue like Suresh Kalmadi is still roaming the jungles of Delhi’s babudom, and so is a man called Kripashankar Singh, a banana seller from UP who went all the way to Mumbai and became its king. And what did Manmohan Singh do? Nothing.

Rahul Gandhi tried to play a clever game and the media fell for it. he tried to pretend he was an outsider and had nothing to do with his mother’s Delhi crowd, and, therefore, with corruption. He behaved like an itinerant hippy, going from door to door in the backlanes and sitting down to dal-and-chawal in aluminium thalis, with, of course, an eye on the nearest five-star hotel which provided the spartan meals. He could not, however, fool the simple folk of Uttar Pradesh, ground by poverty for centuries, while the Gandhi-Nehrus flourished in Delhi. When they got the opportunity, they flung the rascals out, bag and baggage, and the man in his resplendent beard had to return to Janpath, a broken man but perhaps none the wiser for it.

The voters were so fed up and disgusted with the family, they went out and thrashed every Congressman in sight. In Goa, some families had monopolised all the seats, hoping it would help their brood to carry on the legacy, just like the Gandhis in Delhi. A Catholic family of an ex-Chief Minister had given tickets to every member of the family; they all lost, and some lost their deposits. On the other hand, BJP had given tickets to six Catholics, and they all won. Some of them will not be ministers. BJP was supported in Goa by every community, including Christians and Muslims.

In UP, on the other hand, Salman Khurshid, had managed to secure a ticket for his wife, a Christian. He had also been very belligerent about a special quota for Muslims, an illegal offer. His wife lost her deposit and will probably be not seen again!

The Congress has made corruption an integral part of the administrative and political systems, and some Congressmen are going about saying that the country would collapse without the lubricant of corruption. In fact, Sonia & Co have perfected a business model which I call P-M-P model. I call it a “business” model because politics is big business now, perhaps bigger than IT, if not textiles and steel. In the P-M-P model, you first grab power by whatever means, then use power to make money, and then use money to grab more power. It is a kind of model straight out of Harvard Business School, and, will one day, I am sure, become a part of its curriculum, particularly for Indian students. Actually, I understand it was invented and perfected in Italy, perhaps the most corrupt country in the world, from where it was imported into India ten or fifteen years ago. Don’t ask me who imported it and how it came here. But it has done wonders for those who have been using it—until now.

Why do I say until now? Because you do not know how long it will produce results. India is no more the country it used to be. India is changing right before our eyes, and the new emerging India may not have much use for Italian business models. For one thing, rapid improvements in the economy have produced a new prosperous middle class, which is not happy just buying cars and homes, but is determined to assert itself, and has the political clout to do so. It is also asking for results, not tomorrow and the day after, but now, this very moment, for it wants to see results and benefits from investments that are being made from the savings of the middle class itself.

The new middle class is shaking up governments everywhere in the world, not just in India. It is responsible for the so-called Arab Spring in the Middle East and for the upsurge in Russia that nearly booted out Vladimir Putin in Russia in last month’s presidential elections. And it is the same middle class that kicked out the corrupt Congress regime in Goa and the Mayawati regime in Uttar Pradesh. And it is the same middle class that will overthrow the entrenched Gandhi family and its corrupt “business” model two years from now.

Have patience! We have seen only the beginning. We shall soon see the end!﻿