The Fog and Friction of Civil-Military War in India 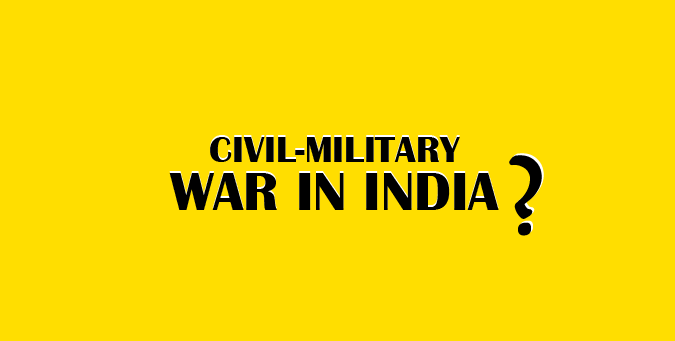 The way things stand today, India cannot afford to postpone thinking about her civil-military relations. Much more than frivolous issues like FDI in retail, financial reforms or strategic tie-ups to be a great power, it is the civil-military conundrum that should occupy the strategic debate in the country. Any neglect of the concerns that the armed forces are raising will only accentuate the feeling of alienation that many sections of the national military are harbouring. There is an urgent need of adroit management of the inevitable militarization of the polity and politicization of the military rather than being passive bystanders at the cusp of changing times.

In 1964, at Nehru’s funeral, Indian army troops had quietly moved into Delhi, raising fears that the army was planning to take over the reins of power. The civilian authorities were not convinced that the sudden surge of troops into the capital was to control crowds at the funeral. They went to the extent of tapping the phone of Gen JN Chaudhuri, then Army Chief. Incidentally, the memories of 1962 war defeat were fresh at this time and the American influence on our military that had begun in 1956 was still pronounced. However, after Nehru's death India refused to join up with the Americans without rocking the civil-military boat any further.

Five decades later, the Indian media has once again reported a similar story - on the night of 16 January (the day on which the army chief Gen VK Singh decided to go to court against the government to resolve his age issue), an unusual converging of the Indian army units (mechanised infantry and 50 Parachute Brigade) took place around the national capital that already has two brigades stationed in Delhi Cantonment. According to the Indian Army, all this was a part of a routine exercise to make the soldiers march through the formidable Delhi fog.

Much like in 1964, the alleged coup of 2012 also happened only in the minds of certain people. However, this sudden flux, the search for a new equilibrium in the civil-military relations in India is certainly not a figment of a reporter’s imagination. The Indian armed forces community is no longer at its submissive best. It is feeling marginalized as the civilian administration is cussedly clinging on to archaic definitions of politico-military equations and making the military feel almost like a civil society group. For years the government and the military were one - equally Indian – then why has the military suddenly started appearing as a separate entity distanced from the state?

The tumultuous trend started in 2008, during the 6th Pay Commission deliberations when ex-servicemen movements sprang up. Aping American veterans, the Indian retired community returned their medals to the President of India, and even sent a memorandum to the Prime Minister signed in blood. The issue was given a burial with a generous pay package by the government. However, these questions have resurfaced after the current Indian Chief of Army Staff decided to drag the government to the apex court to settle his date of birth dispute.

The General belongs to the generation that grew up with a sense of defeat and humiliation at the hands of China. His generation had come to revere Field Marshal Sam Manekshaw who had not only won India a military victory in Bangladesh, but had also dared to address Indira Gandhi as ‘Sweetie’ – an ultimate achievement for a generation of military officers brought up to play second fiddle to the politicians.

After Sam Manekshaw, the Indian armed forces have failed to produce a General who could match the guts of the two Field Marshals, KM Cariappa and Sam Manekshaw or General KS Thimayya when it came to dealing firmly with politicians. The closest a general came to occupy the vacant spot was General K Sundarji; however, he failed to seal his place in history because of the Indian military’s failure in Sri Lanka in the late 1980s.

The others who followed were generally considered to be nine-to-five variety of generals who were more bothered about their post retirement jobs in the government than in making any serious attempts to halt the downward slide of the armed forces in the national protocol list. Perhaps it is this vacuum that General VK Singh has attempted to fill through his strident stand against the government.

Towards the fag end of the 1990s, Admiral Vishnu Bhagwat brought to the fore the misdemeanors of the political class in hobnobbing with illegal and legal arms dealers. He had defied the then defence minister, George Fernandes and gave orders to his men not to pay undue respect to bureaucrats in the MoD, like addressing them as ‘sir’, nor to offer any rum bottles (from officer’s personal quota) to clerks in the ministry to get files cleared on a fast track.

But unfortunately, very few in the defence community could appreciate what the Admiral was doing. The Admiral was ahead of the times. His campaign against the foreign military-industrial complex was launched at a time when majority of the Indian elite were intoxicated with the neo-liberal reforms and the ensuing strategic relationship with the United States and Israel. The Admiral’s liberal secular views also did not cut much ice with the then BJP government. The result was that Admiral Vishnu Bhagwat was sacked without causing much reshuffle on the civil-military front.

Today, the same veterans who had once opposed Admiral Bhagwat are now standing up to support General VK Singh in his tirade against only one particular arms deal. Their political compulsions of embarrassing the government are understandable, but their ideological commitment to the idea of a corruption-free arms trade is suspect. There is every possibility that much of this support is only to see the defence minister replaced by a more pliable man favoring the arms lobby. While there is clarity about what Admiral Bhagwat stood for, one is not clear about the intellectual depth in General VK Singh’s stand on India’s defence preparedness and civil-military linkages.

It is naively believed by some that the protracted civil-military tussle can be sorted out simply with the increased presence of men in uniform at key decision-making positions in the ministry of defence. It is suggested that bureaucracy be removed as a via media between the government and the military.

At a theoretical level, accepting a modicum of militarization of the polity is a sound suggestion, but in practice the removal of bureaucracy will bring the military in direct touch with politicians. The military would then be expected to not only manage organized violence, but also cash flows associated with arms deals on behalf of politicians. This may lead military officers to seek bank accounts in tax havens – subjecting the men-in-uniform to political and criminal pressures. In a nutshell, militarization of the polity will concomitantly lead to greater corruption and also politicization of the military.

Conservative politicians may accept an enhanced role for the military within political structures. But can the military afford to tamper with its apolitical character? The regular interactions of the Indian army with civilian populations in counter insurgency operations has already made the army’s command structure vulnerable to corrupt practices and allegations of human rights violations; any further penetration into civilian realms is likely to have a deleterious impact on our democracy.

If a minimalist politicization of the army to restore the civil-military equilibrium appears unhealthy, then equally dangerous is the proposition of leaving the army wrapped in a Nehruvian jacket - dangling away from mainstream national decision making bodies. It is scary because times have changed and so has the Indian foreign policy that is tilting towards the USA.

The Indian military is being urged to rethink its mission and feel emboldened to play a more proactive role on the international stage. As expected, the Indian military’s direct contact with the American empire is aggravating the civil military complexities. Under such circumstances if the political class was to fail to bridge the gap between the Indian state and its armed forces, the men-in-uniform may be tempted to seek solace in American arms as many militaries from third world countries have done earlier. As Morris Janowitz had identified in his book, The Professional Soldier: a Social and Political Portrait (1960) – “The transformation of the military to one which ‘seeks viable international relations, rather than victory…leads to an inevitable politicization of the military. And with this comes an implicit challenge to civilian supremacy.”

Gen VK Singh’s melodramatic media strategy must not be allowed to go in vain. It should lead the authorities to put on their thinking caps. The biggest challenge for the Indian leadership is to curtail the imperial army from courting our military. There is an urgent need of adroit management of the inevitable militarization of the polity and politicization of the military rather than being passive bystanders at the cusp of changing times.