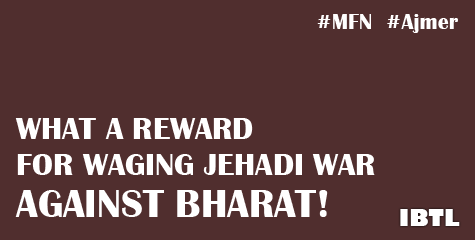 When Bharat’s Hon. PM sent chaddar for Ajmer Dargah with Pakistan Prez accompanied by a very senior and wise Congressman, Bharat hoped in vain that the same PM will send at least Re 1 or 1 kg wheat flour for Langar at Nankana Sahib at Pakistan with the same Pak Prez. Obviously, Bharat did not hope that he or his party would ever give 1 Bilwa Patra to Kashi Vishwanathji or a little Tulsi Patra to Bhagwan Ram at Ayodhya. Pak Prez openly gave Rs 5 crore to Ajmer Dargah and Bharat mutely watched in horror.

Past few years Bharat has been watching in horror the strangest government behavior about Pak. Jehadi attack on Mumbai that scarred the commercial capital. Indian and foreign nationals died in those attacks with no fault of theirs. Their only fault was that they had faith in the government for safety. Police and Army brave hearts died while protecting Bharat then. Lawyers and judiciary worked over night bringing the only alive jehadi to books. Within 3 years of it, Union Government gave the highest trade status to Pakistan: MFN that is Most Favored Nation! What a reward for waging Jehadi War against Bharat!

There has been much debate here about the expenditure on Kasab, whether he should get any access to Bharat’s liberal judicial systems etc. Despite the angry public mood about Kasab, Union Government invited Pakistan’s Judicial Commission to Bharat to ‘investigate’ the brave police officers, Magistrate etc in the Mumbai attack case! Such a crazy mockery of justice – another reward to Pakistan! What for?

The day America announced a big bounty on the head of Hafiz Sayeed, Pak officially said, “No proof against Hafiz”. Within a week of it, Pak Prez was in Bharat announcing rudely to Bharat’s media standing with Bharat’s PM the same thing and Bharat’s PM announcing meekly how he hoped that Bharat Pak relations would be very good.

In a week’s time of it, Bharat opened up its land to Pakistan for FDI – Foreign Direct Investment. This was never done by any previous PM. Neither by Indira Gandhi, nor by Rajeev Gandhi, nor by Vajpayeeji. Union Government showed to the world as if all other previous PMs of Bharat were stupid not to open Bharat for FDI & here was the only finance man who thinks Pakistan FDI in Bharat would never harm Bharat!

By opening up Bharat in such a hurry for Pak direct investment in Bharat while the heated opposition even to other nations’ FDI is on, what does Government achieve? Is this reward given to Pak for saying that there was no proof against Hafiz? If not, then why? Which is this business/industry that Pak will bring to Bharat with direct investment that will improve Bharat’s economy now? Opening ‘T-Malls’ that is Terror Malls with various types of bombs, missiles, rockets with training schools led by Talibani CEOs churning out Jehadi Terror Training Manuals?

This was not enough. Bharat thought that the Union Government gave an apt reply to all those who complained that Bharat’s Army did not have enough weapons etc to fight wars effectively, by Agni -5 missile. Even before Pak tests its Shaheen missile in reply as revenge, Bharat announced allowing Pakistan’s Banks to come in Bharat directly! Another reward to Pak – What for?

What will Pakistani Banks contribute to Bharat’s economy? Islamic Banks have their own rules which apply only to Muslims. Bharat’s Muslims though a minority claiming to be poor and begging to Bharat’s majority for quota in jobs, education, land, loans etc, do have a good number of HNI – High Net worth Individuals. Pak Banks will gobble up their investment plus the direct investment by Pakistani nationals as well as nationals of all Islamic nations. Is government planning to allow Jehadi Terror Funding as a taxable income and investment by opening Bharat for Pakistani Banks? Diverting Muslim funds from all other Indian banks to Pak’s banks, Government is damaging Bharat and opening a Pandora’s Box. As per Sachhar and Rangnath reports taking steps RBI asked all Indian banks to open its branches in the Muslim localities and to give loans to Muslims at low interest rates as compared to majority Hindus. And now Pakistani Banks in Bharat! Reward for Jehadi attacks and Shaheen missile?

There is a limit to masking all such favors as ‘strategic international diplomacy’. It is not any diplomacy; but it is only greedy shameless begging for Muslim vote bank which commands control in Bharat’s many states now due to ignorance of Hindus about the danger of not voting as one. Those who know that if Hindus start voting as one, the 18 or even 20 per cent vote share of Muslim vote bank will also look marginal, try all tricks to keep Hindus divided in castes, gender, region, language etc. Not for long. Hindus all over the world have started to see through the dirty designs of all Muslim vote mongers. Be it Government schemes of reservations or giving Pakistan MFN status, opening Bharat for Pak FDI, allowing Pakistani Banks in Bharat, not attacking Pak despite continued jehadi war against Bharat or any political party in Bharat calling for big Muslim rally in central Bharat or leaders suddenly in the image makeover sitting with Muslims on the stage. Bharat knows it all. Sees it all. Hindus will vote as one to defeat the Muslim vote bank’s domination. Those who have hurt Hindus any which way, will be out in this oneness.

Union Government and the party that leads it now must explain to Bharat: Why special rewards to Pakistan? For diverting Bharat’s attention to such things from the failure to surge the nation’s economy and  from rising prices of essential goods? Well, these could be some reasons, but the main reason is appeasing Muslim vote bank in Bharat by favoring Pakistan at the cost of Bharat’s safety and security. United Hindu vote bank only can counter a such dangerous trend spreading among all political parties like a last stage Cancer!