Misuse of Laal Batti (Red Beacon) by Ministers and Bureaucrats 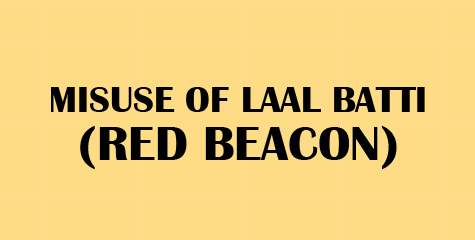 In this TV debate (Why Sonia said no to red beacons for MP's cars) Dilli Police official Mr. Satyendra Garg said that Dilli Police has fined many errant MPs, MLAs, Bureaucrats, Judges, Relatives of Govt officials, Criminals, and General Public for misusing Laal Batti atop their cars as "status symbol" and for getting priority when driving on road. But when Mr. Garg was asked to reveal the names of these lawbreaking MPs and MLAs, he shied away from revealing any names. This is disappointing because those public servants who are blatantly misusing Laal Batti should be publicly exposed.

Laal Batti should only be used for emergency vehicles such as Ambulance, Police, and Fire Engine. This can also be a serious internal security issue because terrorists like Mohamed Afzal Guru (Dec 2001 Parliament attacker) can misuse these Laal Batti, knowing that if they do, Police will not stop them. Laal Batti also causes allot of hassle to common people as Police blocks all streets whenever such Laal Batti cars pass on streets.

But what can we expect from corrupt CONgress, which has been abusing power ever since it formed government in 2004. One very serious example of abuse of power is an airport security check exemption given to Mr. Robert Vadra, by his name, which is a first of its kind exception to the security rules wherein only posts are given exemptions and not specific individual citizens. Even Indian Chief of Army Staff and heads of all branches of Indian Armed Forces have not been extended such privilege. Please see the attached image below...

So, why was Mr. Vadra given such exemption? No one knows but an easy guess is because he is son-in-law of Ms. Antonia Maino aka Sonia Gandhi. Just imagine that with such exemption to airport security check in place, Mr. Vadra may smuggle anything into or out of country anytime, and no one will find out. Please read Mr. Shantanu Bhagwat's blogpost on this topic. "On Robert Vadra, Security Checks and VIP Culture"

In another alarming news, Mr. Kapil 'Zero IQ' Sibal's Internet and Social Media Free Speech Censorship IT Rules 2011 has started claiming casualties. One such casualty is this "Sailgate: The Party that Wasn’t" blog's author, who has been forced to take down a seemingly harmless post due to implementation of Kapil Sibal's absurdly ambiguous IT Rules. There is an online petition at http://www.it2011.in that is calling for annulment of these censorship rules.

India is going through some tough times and its democratic freedoms are under constant attack from its own government. Unfortunately, we have the same problem here in the US with disastrous Obama Administration in power.