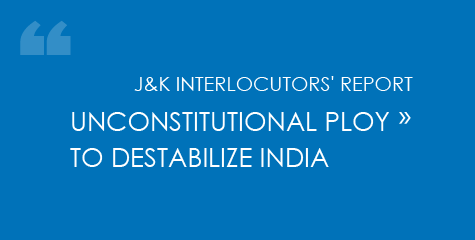 The criminal silence of the Congress leadership on the highly provocative and vicious 179-page report of three interlocutors submitted to Union Home Minister P. Chidambaram in October 2011 is an alarming signal vis-à-vis the future constitutional relationship of Jammu & Kashmir with the rest of the country. The appointment of three faithful musketeers on such a sensitive situation smacks of a connivance of the Union Home Ministry with the ruling National Conference to destabilize the Indian Union and create confusion regarding the constitutional relationship between the State and the Union of India with an ulterior motive to please the Anglo-American Bloc. The silence of the Congress leadership on the Interlocutors’ report is questionable and amounts to acceptance.

The report calls for the revision of all Central Laws extended to J&K after 1952. In other words, Central Laws which were introduced by the legislature of J&K after the dismissal of Sheikh Mohd Abdullah in 1953. These laws or legislations include the authority of the Supreme Court of India, the control of Comptroller General of India, the promulgation of the fundamental rights as incorporated in Chapter III of the Constitution of India as well as the supervision of the Chief Election Commission of India.

Moreover, after having signed Indira-Sheikh Accord (as this understanding between the two leaders is called) in 1975, this issue was closed once for and for all. Sheikh Abdullah’s successor to the post of chief minister has no right to demand revision of the existing State-Centre relationship. The report of the interlocutors amounts to challenging the credibility as well as the validity of the Indira-Sheikh Accord. Sheikh Mohd. Abdullah in 1981 had firmly shut this chapter himself after the two reports prepared by two different committees headed by his cabinet colleagues had suggested closure of the issue for good.

The interlocutors have heavily pleaded for making Article 370 a permanent feature of the Indian Constitution; least realizing that Article 370 was a temporary provision as intended by Dr. Ambedkar. Making this provision as permanent is tantamount to the virtual secession of J&K from India. This would mean that the Parliament of India shall have no control over the affairs of J&K and the constitutional status of J&K shall revert back to the pre-1947 arrangement. This could lead to a civil war in the state. This report falls within the meaning and scope of Section 120, 121 etc. of the Indian Penal Code as it pleads for secession of the State.

The interlocutors have deliberately chosen to avoid the most important issues relating to about 85000 Pakistani refugees who were settled in J&K in 1947/48 by the then administrator appointed by the Maharaja Hari Singh, namely Sheikh Mohd Abdullah. They have been living in J&K as persona non-grata without any civil or political rights. The report has completely rejected the issue of nearly 1.5 million refugees of POK who have been living as migrants in Jammu region since 1947.
The report has completely ignored the political issue relating to Delimitation of Assembly Constituencies which has affected largely Jammu Pradesh, where seven Assembly constituencies stand reserved for the SC category. If Delimitation is barred, all the reserved seats in Jammu Pradesh shall remain un-rotated for 40 years. This may give rise to another cause of civil conflict.

The interlocutors have completely ignored the findings of State Finance Commission headed by Dr. Mehmood Rehman which had suggested equity proposition to remove discrimination with Jammu Pradesh and Ladakh regions.

The interlocutors have deliberately ignored the popular will of the people of J&K that stand for frequent movement of residents of the two sides of the state i.e. between the residents of POK and J&K. The notables from both sides of J&K, who met in 2005 and again in 2007 in Intra J&K ‘Heart to Heart’ Meet in New Delhi, had conveyed to India as well as to Pakistan that movement across the Line of Control should be made feasible and possible for the passport holders of the respective countries. It should be made easy without visa requirement. This is the need of the hour and in the interests of lasting peace between India and Pakistan.

What needs to be done is that India and Pakistan should continue dialogue. A constructive and positive result is possible only when Pakistan is represented by a democratically elected government. Stability and return of democracy is essential to make the peace initiative a success.
J&K should be reorganized within the meaning and scope of Article 2, 3 read with the provisions of Article 370 of Constitution of India. Article 370 should be amended so as to empower the Parliament of India to legislate on matters falling within the scope of the Union List vis-à-vis J&K. This shall remove all doubts about the constitutional relationship of J&K with the rest of the country.

The Kashmiri leadership has always been hostile to the Treaty of Amritsar 1846, signed between Maharaja Gulab Singh and the East India Company, which established the State of J&K and included Ladakh and Gilgit regions. All the three regions of J&K, namely, Ladakh, Kashmir and Jammu Pradesh, have independent and distinguished cultural, linguistic as well as geographical identities. This is an era of upholding the identity or identities of the people or a region or State.

The three identities can survive in harmony and peace provided each one is recognized on the basis of its cultural, linguistic and geographical identity. Jammu Pradesh has multiple of social and political problems which include permanent rehabilitation and settlement of the migrants and refugees from Pakistan and POK. Jammu Pradesh has remained ignored in the field of development, education, agriculture, and otherwise. Ladakh has suffered on all counts of development and communication. The three units shall survive strengthening the bonds of national integration the day they are treated as equals. The interlocutors report is fit for the dustbin and should remain there forever. Let the Central leadership decide what needs to be done.