Why Aamir Khan's 'Satyameva Jayate' could be just half the truth... 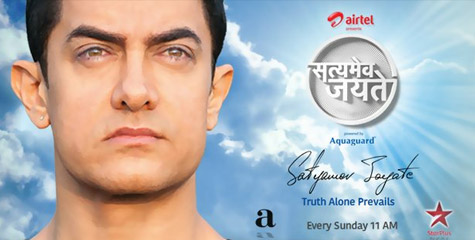 India's national motto 'Satyameva Jayate' has now entered the lounge rooms of the Indian household...thanks to Aamir Khan's TV show. This TV show is a story of how a cine-star can create mass awareness on social issues using a famous Vedic statement 'Satyameva Jayate' as the title of the show. However the original 'Satyameva Jayate' declaration was not coined as a social aphorism. It is much more than that. Exploring the real source and scope of this antiquated affirmation could be more meaningful and enlightening.

'Satyameva Jayate' (Truth Alone Wins) is a famous dictum for spiritual seekers given by the Guru Angiras some 5000 years ago in India. It has now become a slogan for social activism on national television. "SMJ" as it is acronymed seems to have breathed some life to the idiot box. By the way, here is a little feedback on the so-called acronym "SMJ": Elementary Sanskrit points out that the show's acronym should be "SEJ" and not "SMJ" as it is Satyam(S) Eva(E) Jayate (J) and not Satyam(S) Meva(M) Jayate(J).  There is no "MEVA" in Satyameva Jayate.

Why Aamir Khan's ‘Satyameva Jayate' could be just half the truth...
Just going by the reviews and ratings, the show seems to be going strong. Aamir Khan probably got it right when he said 'Public Dekhegi' before the show started. Public ne dekh to liya but the source and scope of this slogan is rather unknown. But that's not the show's mandate anyway. With this auspicious 'Satyameva Jayate' slogan Aamir Khan seems to have graduated from silver screen and in the reckoning of becoming India's first Oprah Winfrey-style celebrity-social-advocate. But his show seems to highlight the "effects" and not the real causes of those social evils.

The TV show has created a milestone in and it would do more justice by exposing the full truth - especially those social malpractices which are based on erroneous interpretations of traditions. A bit more research could show that behind the social evils and social crimes lie the misconceptions about Indian customs, selfish interpretations about the Indian system of living.

Take the instance of the terrible female infanticide issue - it would be appropriate to explain why certain people have this wrong notion that the male child is desirable. Also, how this so-called dowry system is not Indian in origin etc. Without this cause-hunting, the TV show is just scratching the surface. (Note that the Portuguese gave the city of Mumbai in dowry to the English - King Charles II on marrying Portuguese princess Catherine Braganza in 1662). (Read Dowry Murder: The Imperial Origins of a Cultural Crime by Veena Talwar Now for the original Satyameve Jayate...

Where is ‘Satyameva Jayate' coming from...
Many of us think that the motto ‘Satyameva Jayate' is part of the Ashoka Lions emblem, which is not true. The statement ‘Satyameva Jayate' is actually in the opening line of a four-line mantra from the 'MUNDAKA Upanishad' which is found in the Atharva Veda. In the massive library of sacred literature from India, the Mundaka Upanishad is like a collector's handbook. It is a sacred text meant for sincere seekers and especially for Sanyaasis who judiciously renounce all hankering of happiness from the world. The Mundaka Upanishad is a principal text dealing with transcendental wisdom - though simple but serious and authoritative.

The striking part of the Mundaka Upanishad is in the beginning, with Rishi Shaunaka asking his teacher Angiras to teach him 'THAT knowing which everything becomes known' (1.1.3). This is a significant spiritual question in the path of knowledge by a disciple to his Guru. It shows the caliber of students in an era when India was a knowledge society. In answering this question, a wide range of methods are employed to reveal the identity between God and the individual with some superb metaphors and analogies.

Why is the sourcebook Mundaka Upanishad important...
Remember the Hindi word 'Mundan' for shaven head...well this is what 'Mundaka' is supposed to mean. The word Mundaka is significant because it literally means a person with a shaven head but implies a monk or a sanyaasi. About this Upanishad, the very learned scholar and teacher Swami Krishnananda of the Divine Life society writes:

"Among the Upanishads, the Mundaka Upanishad is regarded as one the most important. It throws a flood of light on the path of Knowledge and leads the aspirant to the highest rung in the ladder of knowledge...Mundaka means shaving, "mund", and so the word ‘Mundaka’ seems to imply that this Upanishad is intended only for Sanyaasis."

How ‘Satyameva Jayate' became world famous in modern India...
It is from this Upanishad that the 'SATYAMEVA JAYATE' slogan was adopted as the national motto of India on 26th January 1950 and inscribed in Sanskrit at the base of the Indian national emblem. This inscription of "Satyameva Jayate" is also found on one side of all Indian currency. The credit goes to Pandit Madan Mohan Malaviya, the great Indian educationist, founder of Banaras Hindu University and freedom fighter as he popularised this slogan in 1918 during India’s freedom struggle whilst serving as President of the Indian National Congress.

There have also been some other uses of this slogan when a Hindi movie was made with the same name in 1987. Even the Rolling Stone legend Mick Jagger sang ‘Satyameva Jayate' collaborating with music maestro A.R.Rahman last year. And now it's Aamir Khan's turn to reinvent the wheel giving it a totally social spin. This TV show is probably the only television programme which has had a title with words directly from the Upanishads.

The satya about 'Satyam'...
The full stanza of the 'Satyameva Jayate' slogan from the Mundaka Upanishad (3.1.6) goes this way:

So the phrase ‘Satyameva Jayate Na-anrtam ' is not about social justice nor is it a slogan meant for constitutional adoption. It encompasses all truth and a life based on truth and truthfulness. The Satyam in the "Satyam-Eva Jayate" is not just about speaking the truth about social evils and malpractices. The great Acharya Shankara commenting on this very stanza writes "Truth alone wins and not the untruth...It is well known in the world that he who utters falsehood is defeated by him who speaks the truth: not the converse". A consistent way of living based on the superiority of truth and values of intellectual truthfulness, says Acharya Shankara, widens the path to spiritual success.

So the truth about the 'Satyameva Jayate' statement is that it has now become an iconic slogan for social change rather than for spiritual upliftment. These Upanishad mantras have thus journeyed from the esoteric realm of the Guru to the social arena. The wisdom of India has always found new avenues to manifest such 'Truth' affirming statements. Truth never dies - television or no television. "Truth alone wins (Satyameva Jayate) not Falsehood (Na-anrtam)".