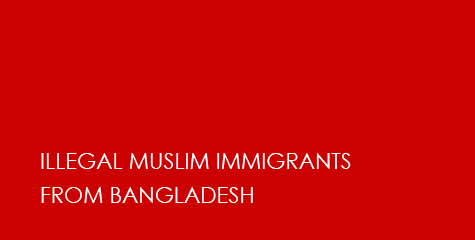 The team of 15 members led by Jaleswar Brahma, General Secretary of Janjati Dharm Sanskriti Suraksha Manch visited scores of refugee camps and horrible condition of each refugee camp was one and the same.

The Committee has termed influx of illegal Muslim immigrants from Bangladesh as ‘key reason’ for the ongoing unrest that has shattered the Bodo society. The Rabhas, Rajbanshis and other Hindu communities were equally targeted. The Muslims from Char areas also entered Kokrajhar and Chirang districts to create clash.

Fact finding Committee visited around 300 camps which have sprung up during the last fort-night. The fact finding committee has alleged three powerful Muslim Ministers in Tarun Gogoi cabinet who support Muslim influx from Bangladesh for petty political gain. Those ministers are Rockybul Hussain who is minister for Panchayat and Rural Development and Forest and Environment, Nazrul Islam who is minister Welfare and Development of Muslims and Haj and third is Siddique Ahmed who is minister for Border Area Development and Co-operation. Fact finding committee also named two Member of Parliament namely Rani Narah and Badruddin Azamal. Committee also alleges 28 Muslims MLAs in Assam Assembly.

The role of all the three Muslim Ministers and two MP are not beyond doubt, says Fact Finding Committee.

Jaleswar Brahma, in a Press statement has said that the Bodos are already squeezed between Bhutan and Bangladesh and the state is encouraging Muslim influx from Bangladesh because of vote bank politics. The Assam has become a lab for communal experiment for ruling party in Assam and Delhi. In fact, this is an Indian vs foreigner’s issue. This may be seen from the fact that out of 23 districts in 2011 census, 6 districts – Dhubri (74.3%), Barpeta (59.3%), Hailakandi (57.6%), Goalpara (53.7%), Karimganj (52.3%), Nagoan (51%),have a Muslim majority population. In Marigaon, they constitute 47.6% and in Cachar 36.1%. In 8 of 23 districts, they constitute from 1.6% to 8%. In Kokrajhar Muslim migrants have been used in the similar way by foreign force to turn Assam a Muslim Country. And the casual approach of Centre is most disgusting. It has shocked the Assam when Tarun Gogoi declared that there was no illegal Muslim migrant in Assam, said Jaleswar Brahma.

The Committee has stated that the Kokrajhar carnage has reminded the mass – murder of Tiwas (then Lalung) in Marigaon in 1983 wherein over a 100 Tiwas were murdered by Bangladeshi Muslims and thousands were rendered homeless. This was repeated same year in Kharupetia and Dhula in Darang district.
Riot victims in Commerce College relief camp in Kokrajhar told FFC that the Muslims were so cruel and greedy and they heard one of them slit the throat of his pregnant wife so that he could claim compensation from the Government for those who died in violence last week.

FFC went through Kokrajhar, Dhubri, Chirang and Baksa a week after one of the worst Bodo - Muslims clashes. They found that the clashes have ripped people apart and whole area was converted into war zone. Committee members witnessed charred houses, burnt pets, wandering people and orphaned children surrounded by them.

Colleges, schools, primary schools, gram panchayats, community halls buildings and empty private houses were converted into refugee camps crammed with people splitting out on the roads and every vacant space. The cries of the children, wailing of mothers-wives of killed persons and sobbing of family members were soaring in the air.

Victims who ran away from their homes empty handed living behind everything only to be looted by Muslims and burnt down to ashes are living in worst conditions.
The FFC met senior leaders of Bodo community who complained that armed Muslim youths with skull caps came across railway line and attacked the Bodo villages while shouting Allah-o-Akbar. They had assembled in a nearby masjid. Many eye-witness victims informed that Muslim United Liberation, Tigers of Assam (MULTA)- a terrorist organization hosted by All Minority Students Union (AMSU) and All Bodoland Minority Students Union (ABMSU) were the mastermind behind the communal carnage.

The Committee also found that officially it is stated that 77 people died in the violence, but unofficial count goes beyond 100 and displacement of over four lakh native people.

FFC commented that never before in independent India have we had to deal with such a large number displaced because of violence and sheltered in 300 make-shift camps.

This is not the first time the two groups have clashed .In 1993 and 1994, Bodos have clashed against Muslims after Bodo Accord was signed by the Centre. More than 100 people mostly Bodo Hindus were killed and at least 60,000 others were rendered homeless. The last time, the Bodos clashed with Muslims was in 2008 in Darrang and Udalgudi where in 100 people were killed and 200,000 displaced.

The Fact Finding Committee also criticized Tarun Gogoi Government, which has miserably failed in protecting the lives of people in various refugee camps.