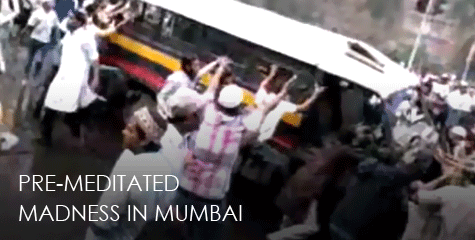 Watching the burning vehicles on television, the mind raced back to December 1992 when Muslims went on the rampage after the demolition of the Babri Masjid in Ayodhya. Then, as now, their strategy was broadly the same: protest violently, provoke, take a small incident and use it as a reason to make a point. When police try to control restive crowds by lathi-charge, and then firing when nothing works, say Muslims are being persecuted in India if a Muslim dies...

Actually, the police are mandated to maintain law and order. If they fail to control the mob they are blamed, if a Muslim dies in firing they are blamed. Either way, they bear the brunt of the dispute.
This time, the Media was the target of focused Muslim anger. Three TV broadcasting vans were set on fire, media men and policemen roughed up, and the new glass façade of The Times of India building in VT (close to Azad Maidan, the venue of the protest) shattered. Muslims participating in Saturday’s [11 Aug] protest sent a clear message to the Media not to make any statement perceived as against their community or the cause it was espousing – alleged concern over the fate of the Rohingya Muslims of Myanmar, and determination to keep the Bangladeshi infiltrators within the frontiers of India.

This is reminiscent of the violence in Sholapur when American pastor Jerry Falwell called the Prophet a ‘terrorist’, with no repercussions anywhere in the Western world, in 2002. Thereafter, the Congress MP from that constituency rose and rose in the esteem of his party supremo, and is today the Union Home Minister. His statement on the recent Pune blasts was as awe-inspiring as his comments after the massive power blackout of 31 July, when three grids collapsed all over northern, eastern and north-eastern India. If he said anything of note after Saturday’s violence, it has failed to grab attention. The new Union Home Minister has clearly got the message that nothing must be said or done to annoy his party’s principal votebank.

The perpetrators of violence also sent a message to the Mumbai Police not to take any tough measures when Muslims protest. Azad Maidan is just minutes away from Police Commissioner’s Office.

Broadly, Muslims conveyed to the Congress leadership that for continued electoral support, it should not dare to take any action against Bangladeshi Muslims in Assam. They warned the Supreme Court not to pass any judgment that stops or inhibits Bangladeshi infiltration. The next Chief Justice of India is a co-religionist; perhaps they were telling him what they expect from the august court under his dispensation.

So what actually happened last Saturday? As best as one can piece the information together, it seems that the Raza Academy, a cultural organisation, supported by the Sunni Jamait ul Ulema and Jamat e Raza-e-Mustafa, took permission to hold a meeting of 1500 persons at Mumbai's Azad Maidan, to protest against the recent riots in Assam and alleged attacks on Muslims in Myanmar.

Then, armed with the permission, hundreds of activists sporting black badges converged at Azad Maidan and expressed concern over the ‘massacre’ of the Muslim community. Maulana Syed Moinuddin Ashraf, president of Jamia Qadriya Ashrafiya, demanded that the Central and state governments intervene to “protect the Muslims”. Conceding that Myanmar was an external problem, he alleged that Assam “reflects on the state of affairs of the country,” surely a blatant falsehood.

When the protest turned violent – some claim 15,000, some say over 50,000 protestors turned up at the venue in contrast to the permission granted for just 1500, and policemen on the spot were a meager 800 – police were helpless. As the situation deteriorated, and Media and Policemen were made the target of mob ire, police fired in the air to disperse protesters. Television vans were torched by the well-prepared mob.
As expected, the Raza Academy which organised the protest was quick to claim innocence and blame the violence on some unnamed radical elements. From the scale of the violence, it is obvious that it was pre-planned, and well-planned. Photographs reveal the extent of violence and the damage caused to the city.

The police were rattled enough to force Mumbai Police Commissioner out on the streets in his headgear. But is it the role of the Chief to direct mob control; should he not stay in the control room and strategize, monitor, guide? In November 2008, Hemant Karkare made the same mistake and paid for it with his life.

At the end of day, as the situation was brought under control, the toll was two dead (both rioters), 54 injured, of which an astonishing 45 were policemen. They were clearly the victims of targeted violence. One newspaper quoted a young constable as saying that the mob attacked him with sticks, helmets and stones. He reported seeing them tossing a policeman up several times. It was a bad day for the Police; newspaper pictures show many constables running to save their own lives.

Media drew its lessons in proportion to its property in the city. The venerable Times of India did not mention that the rioters had damaged its building, and played down its reportage as compared to rival papers situated outside the city. Other papers with huge landed property also played safe.

And why not? The Hindustan Times reported its senior photographer as saying that he heard an orator [at the Maidan] blaming the media for not giving adequate coverage to the plight of Muslims in Assam and Myanmar. Feeling something was amiss, they clicked pictures and left. Some minutes later, they were informed that an OB van was on fire. As the journalists ran towards Azad Maidan, a mob of about 400 people clashed with them; they were separated and each journalist was attacked by at least 25 men. Five or six photographers were beaten up; their cameras smashed and taken. Policemen were also targeted. As a man in the crowd begged a policeman for help, the beleaguered officer asked, ‘should I save your life or mine?’

After all, there are just 39,000 policemen for the whole of Mumbai, clearly inadequate to take on a motivated gathering of 50,000-odd protestors. Newspaper pictures clearly show some of the rioters with big stones in their hands – it was like a capsule of the stone-throwing incidents in Srinagar Valley last year.
Worse, given the shoddy record of our human rights industry and our political leadership, one can expect that the policemen who fired and were responsible for the death of two rioters would be grilled like Gujarat policemen after the 2002 riots there, and those who took action during the 1992-93 Mumbai riots. What else can one expect from a regime whose Home Minister, R.R. Patil, was caught on camera with a Dawood Ibrahim aide?

Mumbai citizens don’t expect things to get better. Rioters and terrorists know that they are unlikely to pay for their crimes. After all, convictions in the 1993 Mumbai blasts are still pending with the Supreme Court since 2008; nothing is known of the fate of the 2003 Gateway of India blasts probe; trials in the 2006 train bombings are going on at snail’s pace; the 2011 multiple bombs in Opera House and Dadar are festering somewhere; while there is no progress in the Pune German Bakery bomb blast. Then there are the fresh Jungli Maharaj Road bomb blasts in Pune of 1 Aug 2012, the day Sushil Kumar Shinde was elevated as Union Home Minister.

Watch Video : Mumbai Azad Maidan Violence : Exclusive, 11 Aug 2012
As one unclosed chapter of violence piles upon another festering sore, life goes on for the hapless denizens of the city – it is called the famed resilience of Mumbai. Congress MP Milind Deora garners the maximum number of votes from the Muslim areas of South Mumbai from where hail the rally organizers, the Raza Academy. We have not heard a peep out of him.