Impact of Amarnath Yatra on Environment, Ecology and Bio Diversity of the Area 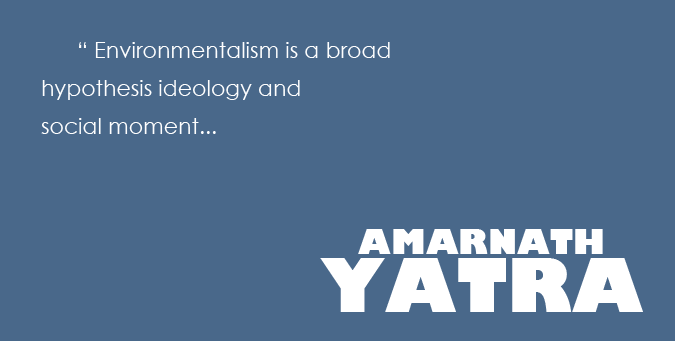 Environmentalism is a broad hypothesis ideology and social moment regarding concerns for environmental conservation and necessary improvement For this reason concepts such as land ethics, environmental ethics biodiversity, ecology and biophilla hypothesis figure prominently. Earth sciences usually recognized four spheres namely lithosphere, hydrosphere, atmosphere and biosphere corresponding to rocks, water, air and life. Some scientists include as part of the spheres of the earth “cryosphere corresponding to ice. Basically environment is an attempt to balance relations between humans and various natural systems on which they depend in such a way that all the components are accorded a proper degree of respect.

Environmental is viewed today a setting aside of natural resources to prevent the damage caused by humans or human activity such as deforestation, mining, hunting fishing overgrazing by domestic livestock and replace them with other human activities. Ecology is the scientific study of relationships living organisms have with each other and with their natural environment, and at the same time it must be clearly understood synonymous with environment Biodiversity is the degree of variation of life forms within a given species eco system, biome of the planet.

Let us examine how the annual Amarnath Yatra which has been going for about two thousand years but in recent years the number of pilgrims has increased from few thousand to about six lacks per annum. It is an established fact that the to and fro moment of pilgrims is restricted strictly to the tracks between the road heads of Chandanwari and Baltal to the holy Amarnath Cave shrine. Not a single pilgrim is allowed to move beyond the width of the either tracks and as such the blame of degradation of environment ecology or biodiversity of the area by pilgrims is unfounded and biased. Same is true of Vashino Devi Yatra which is visited by about 80 to 90 lacks of pilgrims annually with practically no damage to ecology or environment, in spite of the fact that the track has been considerably widened the degradation of environment is effected mainly by the shepherds – the Bakarwals, Gujars and Kashmiri shepherds (Pahels) who are free to move anywhere illegally fell trees, cause forest fires by carelessness, overgraze the pastures by their herds of goats, sheep and buffalos with the result the herbivorous wild life like Ibex, Markhor, Baral etc have been doomed to extinction. The scarcity of herbivorous wild life has directly reduced the numbers of carnivorous animals, like Brown Bear(Bam haput) Panther, Snow leopard, Lynx which once abounded in the area The shrine board as well as the state govt turn a blind eye to their activities.

A lot of hue and cry has been raised by self appointed environmental experts in reality politicians bureaucrats and tourist officers that glaciers are getting degraded by increased number of Pilgrims to the Amarnath Cave. There are – five major glaciers around Amarnath namely Nehnar, Mushran, Thajwas and Sekhi in Sind valley and Koenjnar(Shushram) and Kolahi in Lidar valley but none of these glaciers are traversed by the Baltal, Pahalgam or Gulol Gali routes. However a small glacier lies besides the track between Vayurjana (Vowjan) pass and Panjtarangini (Panjtarni) even which does not lie across the track. I doubt if any of these self styled environmental experts can differentiate between a glacier and snow accumulated in depressions due to drift and avalanches and creep. Many of these snow accumulations and snow bridges have been confused with glaciers even in places like Chandanwari and all along the Baltal route.

A glacier is not a seasonal feature like avalanches, but a large persistent body of ice formed by gradual expulsion of air from huge thickness of snow where accumulation exceeds ablation [melting and sublimation ] and moves day down the slope along valleys at a speed of 1 to 3 feet a day. And ends much below the perpetual line of snow giving rise to glacial streams at the snout. It is also doubtful if they can quote the local kashmiri word for glacier.

How far the politicians, bureaucrats and other officials of the shrine board and state govt. are environment conscious is a million dollar question. Motorable Mughal Road was built across the Pir Panjal Range between Rajouri and Shopian after cutting innumerable Deodar and other trees and also spoiling the only sanctuary for Markhor an endangered species of goat of western Himalayas’ The aerial rope way [Gandola] between Gulmarg about 9,000 ft and Alaapathar nearly 13,00 ft is not regarded as an environmental hazard but a proposal to erect a similar ropeway between Baltal and the Amarnath shrine cave was and is being opposed by separatists, state govt. and surprisingly by the shrine board who are all yes men of the separatists.

How is that a 14 km track /road between Baltal will spell an environmental disaster when the construction of highway from Sumbal to Zojila which from Ganderbal onwards runs parallel to Sind river did not. Why was Umar Faruk of the hurriat chairman silent when the only Markhor sanctuary in Kashmir was ruined by the construction of motor able road between Rajouri and Shopian. This is sheer hypocrisy.


Author MM Munshi is a renowned researcher on the historiography of Holy Amarnath Cave. He has remained a senior official of Geological Survey of India and is a keen Researcher.