If these are Cambridge products, God help Cambridge... 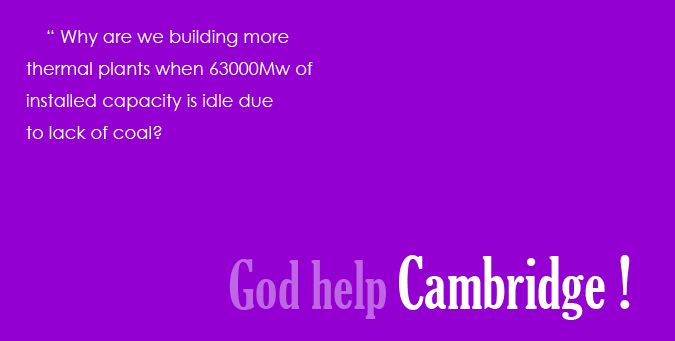 A couple of months ago i asked a keen political observer friend of mine, how Manmohan Singh who is touted as an honest and brilliant economist could tolerate the loot that goes on in his watch.

He wittily replied that Manmohan Singh was either an honest man or a brilliant economist but surely can’t be both.

After thinking some more about this statement, i have compiled a list of questions which Manmohan Singh should answer, the next time he opens his mouth for something other than eating. All these questions deal with geopolitical implications of his (in) actions and the nation demands an explanation.

# Why are we building more thermal plants when 63000Mw of installed capacity is idle due to lack of coal?

# Shouldn’t the government’s priority be to ensure adequate coal is supplied to our power plants?

# Why do we import coal when we have the largest coal reserves in the world?

# Why where coal mines gifted without any clause on getting guaranteed prices for end products like power, cement or steel?

# Why has he allowed the plunder of precious thorium reserves and stalled the development and commissioning of indigenous thorium fuelled reactor.

In the absence of any reply from him to the above questions is the reader to assume that this is part of a deliberate strategy to import expensive coal, ensure that a cabal of crony capitalists and sons of politicians hoard coal and finally use the lack of power as an excuse to import expensive Uranium fuelled nuclear reactors and expensive fuel to power the same.

# Why is Walmart being given the right to formally enter the Indian market, when they have already broken laws by surreptitiously entering the retail market.

# When he claims that FDI will help in setting up cold chains and prevent food wastage, is he implying that Indian’s can’t set up even a refrigerator on their own.

# Assuming Indian’s are so incompetent that they can’t even install a refrigerator, how does the Manmohan Singh plan to power these refrigerators, considering that rural and semi-urban India has to deal with 12-15 hr power cuts as a fact of life?

# What does he have to say to the charge that all programs undertaken under MGNREGA every year at a cost of a whopping 70000Cr result in no tangible asset creation on the ground and are in fact siphoned off by middlemen and touts?

# Does he take responsibility for the sharp increase in alcoholism among the rural youth because of availability of money without work or responsibility?

Every month a list of charges will be presented, charges that it is his duty to answer. The people of this country demand an explanation from him on all the specific points raised above.

Failure to do so will only imply that he is either dishonest or incompetent.

In the case of the latter we can only say that Cambridge has significantly fallen in prestige. After all 2 other prominent members of his party claim to have graduated from there. (A claim strongly contested by Dr Subramanian Swamy)