Where is the difference? 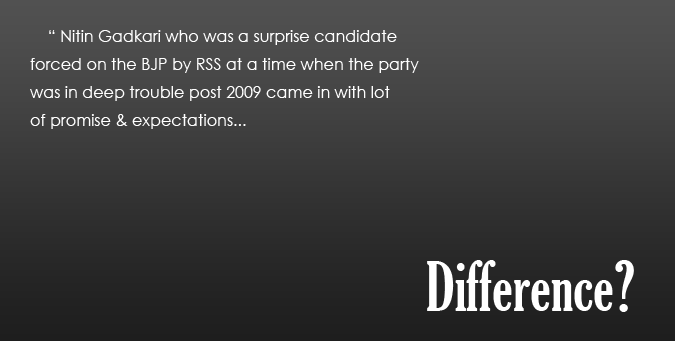 The party with a difference is how BJP has projected itself in the last two decades. But post losing power in 2004 the party seems to be on a major search operation for that “Difference” it was identified with. The biggest problem plaguing this party is the leadership crisis. None of the presidents post 2004 debacles have been able to bring back the party back into the reckoning. Its been sliding down touching new lows everyday.

Much of the malice in the party today is self inflicted because of multiple power centers on which it operates. Two of the main power centers which have hampered the growth of the party at national level are the NDA & the unofficial Delhi high command. Surprisingly the national crisis of BJP has not dampened its prospects in states where it is in power barring Uttarakhand where it lost narrowly & Karnataka where it is the verge of a vertical split.  The heads of Gujarat, Madhya Pradesh & Chattisgarh have very clearly insulated their states from getting affected by the Delhi power politics & have surged a head of every other state in the country on the development agenda.

Nitin Gadkari who was a surprise candidate forced on the BJP by RSS at a time when the party was in deep trouble post 2009 came in with lot of promise & expectations. He seems to have succumbed & surrendered his mandate to the Delhi power lobby. The results of which have been seen in UP & Uttarakhand loss along with total chaos in Karnataka. The merits & demerits of BSY are debatable but as a party the BJP handled him very badly which again shows that it learnt no lessons from the Kalyan Singh episode. Now with media mounted allegations about his social enterprise casting perception crisis the fissures within the party have widened beyond repair.

One of the major issues with BJP , per me is the way they handle media. On one side they have brilliance in spokes persons like Nirmala Seetharaman, Meenakshi Lekhi, Smriti Irani & on the other hand they have mediocrity in Prakash Javedekar,Muktar Abbas Naqvi,Chandan Mitra & so on. The BJP is today a major PR disaster in every aspect. The way the party & Gadkari himself countered the creative allegations against him was very poor. To make matters worse it was left to S.Gurumurthy to investigate & clear Nitin Gadkari & not the Purti Charted accountants which has further damaged the already battered perceptions on this issue.  To make the matters worse the voices for his ouster got louder with the Jethmalani father son – duo to begin with and now Yashwanth Sinha asking for NG to step down.

The voices of dissent against Gadkari cannot be put down as a one odd case by any means. The Purti issue may have just acted as a catalyst to an already existing unhappiness within some sections in the party. His failures to mobilise BJP electorally & his personal favors to friends in making them Rajya Sabha members against the wishes of senior party members have all multiplied & came out in form of Purti. As S.Gurumurthy put it , Gadkari may have done no wrong in his social enterprise but as a party president he has failed to command & propel. The country has looked at BJP as the only alternative to the congress nationally and the BJP is not doing any justice by showing they are no difference …

More Opinions
# Mumbai: Is it a new beginning for BJP?
# Uttar Pradesh voter Packs off (white) Elephants
# Political Self destruction is now an Art Form
# Prepoll or Post poll on the Road to Delhi?