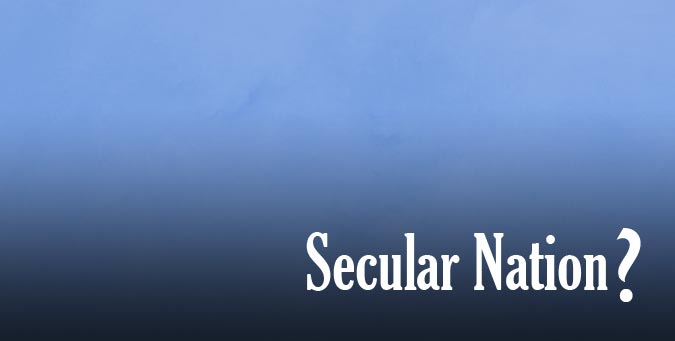 India is a secular country. At present this statement is given by our worthy politicians for vote bank where half of them don’t even understand its literal meaning. Secularizing a state means granting religious freedom to its citizens. The term ‘Secular’ was added by the 42nd Constitutional Amendment Act of 1976. Indian Constitution embodies the positive concept of secularism i.e. all religions in our country (irrespective of their strength) will enjoy equal status and support from the state. Also, the drafters of Constitution were very clear in their view about establishing India as a ‘secular state’. Article 25 to 28 has bestowed us with the Fundamental right of ‘Right to freedom of Religion’.

Secularism means that we can freely profess, practice and propagate our religion and state will not interfere in it. Somehow, the term secularism has been invalidated by the acts of our government. Exploitation of law and rights of the people is their game for vote bank and black money. Once they are in power, all the promises made by them are marginalized. On one hand they talk about uniqueness of our country and on the other hand they onslaught its resources for money making.

The history of our country dates back to the age of Vedas. Hinduism was incarnated in that era and it is the most ancient and diverse religion. In India 80.5% of population practice Hinduism. Hinduism recognizes numerous divine beings which are worshipped as almighty God. Hindu epics, the Puranas, monument and heritages relate the episodes of the descent of God to the Earth in corporeal form.

‘Ram Setu’ is one of the oldest foot stone acquainted by the Hindus. Scientifically, it is a 18 miles long chain of limestone shoals which connects Pamban Island (India) with Mannar Island (Sri Lanka). The sea is very shallow ranging from 1 meter to 10 meters in depth. Before 15th century it was crossable until the cyclone deepened the channel. Because of its shallowness, it hinders the navigation of ships.

Mythological evidence says that this bridge was built by the Vanar Sena of Lord Rama during the era of Ramyana and was named as ‘Setubandhanam’. It embarks an important symbol for one of the greatest epic i.e. Ramyana. Thus, it carries high religious, sentimental and canonical value for Hindus.

The government is now planning to destroy Ram Setu to establish Sethusamudram shipping canal project (SSCP). This canal will be used for ship navigation. The government wants to establish an easy access between eastern and western coast of the country. Along with this they also promise to establish 13 new small ports and fishing harbors along the coastline. It sounds good for a minute but there are many criticisms that are reasonable enough to withdraw this decision.

# Emblem of Faith: It is one of the sacred structures of Hindus. It is believed to be built by Vanar Sena during war between Lord Rama and Ravana. Followers of Hinduism all around the world carry divine predilection towards it. It not only symbolizes the presence of God on Earth but also reminds us of the victory over the evil.

# Environmental: Gulf of Mannar is the richest biosphere reserve in South Asia. It holds bountiful coastal and marine flora, and is also an inhabitation site for over hundred species of corals and endangered sea animals. Coral reefs here are also called as ‘underwater tropical rainforest’. It is also praised for its pearl banks. Also, the risk of oil spill by the ships which can devastate the marine life cannot be excluded.

# Natural Barrier: In 2004, tsunami of Indian Ocean devastated huge area along the South-Asian coasts. Fortunately coasts to the west of Ram Setu were preserved as the waves were diverted and reflected after striking it. This saved the lives of thousands of the people.

# Cost of project:  No doubt that the canal will bring down the sailing time of the ships but the proposed tariff will cost heavily to the transporters. Ships will comparatively lose more money during the transit through the canal. If the Government will lower the tariff then return of investment will be heavily compromised. Only the ships carrying load of 30,000 tones will be able to use this canal. Now days, most of the ships carry tonnage of much more than this. Apart from this, there will be potential loss of thorium reserves as well.

# Effect on agriculture: It is also argued that canal will raise the level of water table around it. This will directly affect the water used for irrigation purposes around the coast. So, not only the marine life but also the crop productivity will be hampered.

# Preservation of sacred symbol: India displays diversity in culture, religion, language, dance, music, architecture, customs and food. Architectural preservation holds paramount situate in our country. Constitution has given us the duty to protect monuments, places and objects of artistic or historic interest (Article 49).

Going through the above facts, we can easily make out that constructing canal is not a wise idea. Not only it will hurt the emotions of Hindu followers but it will also hamper sea life, causing undue pollution.

Team from Centre for Remote Sensing (CRS) in 2003 said "the land/beaches were formed between Ramanathapuram and Pamban because of the long shore drifting currents which moved in an anti-clockwise direction in the north and clockwise direction in the south of Rameswaram and Talaimannar about 3,500 years ago." and, "as the carbon dating of the beaches roughly matches the dates of Ramayana, its link to the epic needs to be explored". Also former director of the Geological Survey of India claims that such a natural formation would be impossible.

Delhi metro route was diverted to save Qutab Minar from annihilation. It is also not a place of worship, as government has argued while defending itself for the demolition of Ram Setu. Then why extra money was spent on diverting the metro route? Government is also spending crores of money in maintaining large number of old forts all over the country.

Transport, which is kept as an important agenda in this controversy will not be profited. The theory of time saving given by the government is implausible when it is compared with the money spent on the construction and then the taxes that will be levied on the ships.

Government always talks about saving the natural habitat. Lacs of the funds are spent on building and maintaining various biosphere reserves. But the decision of the government to demolish this natural coral reserve beauty is vacillating. Sand mining has been banned in many states of our country because it is hampering natural wildlife. Construction business is suffering crores of loss because of the ban. According to the various environmentalists, turtles and special breed of crocodiles (gadiyals) have been listed in endangered species now. When government is so concerned about the nature, then why it is deliberately transgressing it now by destroying the Ram Setu?

Our ingenious government has also rejected the RK Pachauri Committee report which ruled the Sethusamudram project as unviable. According to the committee the establishment of Setusamudram shipping channel project, cutting through the sacred Ram Setu is not economically viable and the project can create environmental disasters. Also, it will violate the Article 295A of the constitution which safeguards the religious sentiments of a community.

Why our government always stooped towards money rather than ethical values? Establishing man made biosphere reserve will be a potential resource of black money and so will be the construction of canal. Malodorous smokes of a new scam can be easily smelled. We are not pointing out anyone but the stupendous history is forcing us to think like that. Our country is already suffering loss in various sectors and planning of such an expensive project both in terms of infrastructure and later on in its application will do an injustice to every common man of the country.

Land or air can be used as medium of transportation. But masterpiece like Ram Setu cannot be reinstated. People of our country are not in favor of demolishing Ram Setu. It is one of the most fascinating creations. It is also an incomparable and peerless asset of our country. The government should not be irrational to this displeasing decision. We represent a democratic nation and not a dictatorship. Voice of the people should be heard and respected especially when they are naturally supported by persuasive and defendable logics.

We, the people of India condemn the idea of this project which will not only pierce the Godly sentiments but will also blemish our economy. The Government of India should take back its decision to demolish such a revered monument or the people of India will rise against the cruelty and injustice matted out to them.