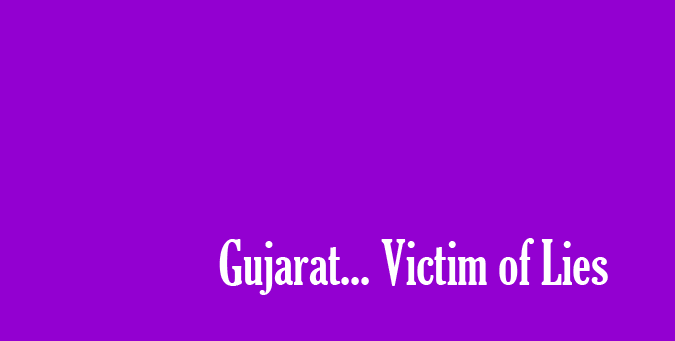 Thomas Paine once wrote -“Reason obeys itself; and Ignorance submits to whatever is dictated to it.” Ignorance requires no reason  no facts- only prejudices. From last couple of months we have been reading in columns and Op-eds, about different set of claims “debunking” the Gujarat performance in general and modi’s effectiveness as a leader in particular.At the heart of these  “debunking theories” is the issue of malnutrition in Gujarat, a topic completely blown out of the proportion.

Though India  may rank at 134th in the HDI ranking, yet somehow it is expected from the Gujarat to outperform India at every sector   be it health or  economy education or investment.Few days ago The CAG (Comptroller and Auditor General) released its auditing findings on ICDS (Integrated child development scheme)  the reports looks at the effectiveness of the programs initiated to uproot the malnutrition from various states.Turns out that Gujarat has shown the most  impressive decline in the malnourishment  whereas the rich state like Delhi, is among the worst performer where Malnutrition rate is as high as 49.91%.

As of March 2007, the malnourished children in Gujarat were high as 70.69% but miraculously in 2011 this figure came down to surprisingly 38.77% - the sharpest registered decline in India ! not only this  as Firstpost suggests   “ Gujarat is now  comfortably above the national average on malnourishment at 41.16 percent.”

Surprising as it is unlike vehement Gujarat criticism, these facts managed to escape the headlines of many prominent daily broadsheets and magazines, otherwise known for their diatribe against modi.

For leftist lynching mob, it does not matter how appalling India’s social indicators are what matters is that Gujarat must be an out-performer-every time everywhere. In Global hunger Index  India has secured an embarrassing place 67th out of 79 !.even countries like Bangladesh are far ahead on many social indicators like decline in child mortality, and  43 % of Indian Children are underweight. Should this not give sleepless nights to the same people clamoring against Gujarat model?

60 years of flirting with socialism, then a little period of romance with capitalism, and then again in bed with socialism, this scandalous love story has eaten up many resources,dried up capital.same people lamenting about Gujarat have never been held accountable  for taking nation on a road to disaster, after six decades of independence  India has world's largest number of sick people and the state of public health care is such that it is  short of 76%Doctors 53% nurses and 88% specialists.

Has the same people with their JNU degrees oxford diplomas,and “Das Kapital “ in their hands been able to prevent the death of 70,000 mother every year?  17.3 lakh children under five years die in India Every year,, most of them before their first birthday. Reason? well Margaret Thatcher answered it many years ago she said “The problem with socialism is that you eventually run out of other people's money.”

Another often misrepresented fact about Gujarat is it’s growth story, and  the rhetoric that it is lagging behind, compared to other states, clarifying this  senior journalist  R Jaganathan wrote in Firstpost  that “the real story of Gujarat’s relative under performance compared to its obvious peers – Maharashtra and Tamil Nadu – may be explained by the simple fact that Gujarat’s growth is based on manufacturing, not services. The IT boom is a southern phenomenon, with Tamil Nadu and Karnataka being the big boys, and Maharashtra is the country’s financial capital. So, the Gujarat story rides on manufacturing and agriculture, and possibly less on services. This may explain why Maharashtra and Tamil Nadu did better.”

According to Dr Arvind Panagariya, professor at columbia university, writing in Economics times notes that  “While the performance in agriculture has received the greatest attention, perhaps the most exceptional feature of Gujarat's success has been the performance of manufacturing. Compared with the national average of 15%, manufacturing in Gujarat accounted for 27.4% of the Gross State Domestic Product (GSDP) in 2009-10.”

Surat, on the other hand, is  emerging as the capital of Textile in India. One of the Mint’s news report, published on 23 feb 2013 ”The surat Fashion matrix” quotes a report from The Southern Gujarat Chamber of Commerce & Industry (SGCCI)  paper quotes from the report that  “city has 600,000 power looms and 400 textile mills which manufacture 8,400 million metres of fabric every year, or 40% of the total man-made fabric in India. Nineteen per cent of all textiles in the country come from Surat. The industry employs 1.3 million workers. “

One of the major  driving force behind the Gujarat ‘s impressive rate of growth is it;s self sufficiency in power sector  while many Indians had a troubled sleep during the grid failure, Gujaratis had a surplus of power.So much so, that state was selling it to the Rajasthan,Haryana,Punjab and delhi.And according to times of India, it earned the profit of 1,800 crore with power selling. till 2001  the same state was a power deficit state  with roughly 2,000 MW. According to TOI report, Gujarat has been providing 24 hours of electricity, not only to large cities like Ahmedabad and Gandhinagar, but also to the 18,000 villages too. reports notes that “ Gujarat now produces about 14,000 MW power of which about 2,000 MW is surplus.”

Returning back to the social development in Gujarat on which the state has come under severe attack from the established  left, is again based less on facts and more on exaggerations  Arvind Panagariya in the same column wrote that “In 2009-10, the poverty ratio in Gujarat at 23% was almost seven percentage points below the national average.” As for the education Gujrat added 10 percentage points to  the literacy rate during 2001-11, which according to Dr Arvind is more than any other comparative state.

In his new book India's Tryst With Destiny: Debunking Myths that Undermine Progress and Addressing New Challenges’: Jagdish Bhagwati writes “Gujarat inherited low levels of social indicators (at independence) and it is the change in these indicators where Gujarat shows impressive progress. The literacy rate has risen from 22 per cent in 1951 to 69 per cent in 2001 and 79 per cent in 2011. The infant mortality rate per thousand has fallen from 144 in 1971 to 60 in 2001 and 41 in 2011.”

While it is true that Gujarat has traditionally been an entrepreneur state  but this  fact can not be  and should not be used to negate the role of Narendra modi as the efficient chief minister of the state.During the tenure of the Modi, Gujarat saw a rapid period of growth he has turned Gujarat into an automobile hub with companies like Mahindra,Tata, Maruti, General Motors and maruti investing in the state.And according to a Hindustan times article” 40 per cent of the Delhi-Mumbai Industrial Corridor passes through Gujarat. Here, Japanese investment will incubate new cities as well as transplant precision-manufacture facilities.”

It is a known fact that Gujarat contributes 16 percent to India's industrial output  state is responsible for 22%of nation's exports, and 9.8% of India's factories are in Gujarat which according to senior economist Bibek Debroy provides employment to 1.2 million.

Having said that, I concede to the point that Gujrat does have drawbacks and dark areas,because Gujrat is just like any other Indian state, and  national policies,politics  and factors in regarding India as a  destination for Investment  Taxation policies, health of rupee etc affects Gujarat too, Gujarat may not be the best but it certainly is not the worst.Gujarat is no “land of honey and milk” and modi is no “modern mosses”, because the only place where these two could be found is La La Land.