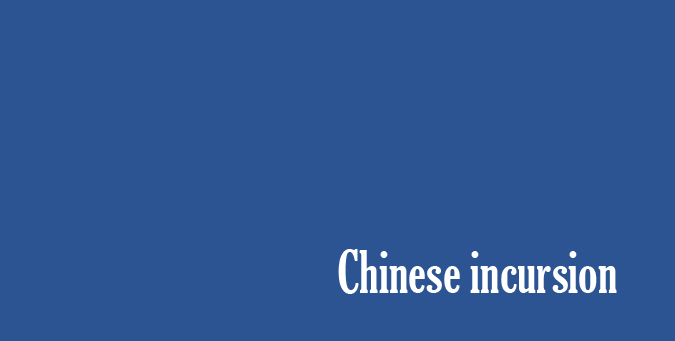 The nation is currently agitated over the inability of the UPA Government to force the Chinese Army to retreat from Daulat Baig Oldie, a remote advanced landing ground (ALG) and old unused air strip which was recently reactivated. The ALGs are generally constructed where a land route is difficult to build and maintain and all-weather operations are not feasible.

ALGs provide an air-maintained multipurpose station for a range of activities from air surveillance to troop maintenance and long range patrol base (peace time); during crisis they facilitate quick consolidation of forces and assets. The Ladakh ALG was reactivated to ensure the safety of our territory in that area as Chinese activities in the Gilgit area had increased in the past decade or so.

According to the latest information available in the public domain, the Chinese have intruded almost 19 kms within Indian Territory, though they claim that their troops are within their own territory. There is not much one can do about this as our Central Government is not ready to up the ante. Maintaining the status quo as a virtue is the ‘principled position’ of this most non-performing government in the history of India.

The Chinese understand this pretty well and have done this to insult India, a wannabe global power; they will continue to insult us in the same fashion in future as well. India as a nation should be ready for many more such insults. We simply have no answer to these tactics (as long as we have this regime and this attitude).

Still, we may ask, what is new in this incidence? Has this happened for the first time?  Why is a section of Indian society so perplexed with the Government’s decision (inability to respond)?

This is not the first regime to this passive and docile stand against intruders in Kashmir. What is happening in Daulat Baig Oldie is an old script being played again by our neighbours, and as per their expectations, the Indian State has reacted in exactly the same old manner. Neither our enemies have changed their modus operandi nor have we changed our reaction. But the question is: why are things the way they are?

The answer lies in India’s policy and its perception of its neighbours and their motives. Our neighbours perceive things differently. The basis of our perception of our neighbours is based on a political-bureaucratic philosophy rather than on an understanding of their regional or global outlook. We have always failed to understand our enemy’s motives. On the other hand, India does not have any objective to be achieved in a given time frame. It’s a paradox. India follows either status quo-ism or ad-hoc in response to a crisis. In the period between crises’ we go into hibernation. We fail to exploit the period of peace and this happens only because there are no stated national objectives.

Experts give the lack of infrastructure and military hardware as one reason for India’s inability to react to this situation with honour. But this is a myopic view. Let us accept one fact – that China has surrounded us with its infrastructure all along the borders and also in the Indian Ocean. Whatever we do now will be nothing but a response to them and something China would have anticipated. Therefore the element of surprise would not be there.

Secondly, we must remember that Beijing’s existing infrastructure is just a beginning; it will be followed by more infrastructure and institutional and political support to make them far more potent than they appear at present. Our experts have nothing to say on this subject. We have to open our minds to new ideas. We will have to foresee what would be the Chinese plan in the next 20 yrs.

Our response must factor in the basic fact that China’s goals are framed in a time-frame of three decades. We have already lost the first decade to them. They have captured physical areas which we simply can’t regain in the immediate future. The whole of central Asia is within their reach. They are in a position from where they can dictate terms and they will never allow us to gain any ground there.

Our diplomats failed in central Asia. We have been talking big about the Shanghai Cooperation Organisation etc, but we have gained nothing. So also in the case of Afghanistan. All across the Indian Ocean they have entrenched themselves well. As of today, we simply do not have the means to match them in infrastructure or military hardware. We will have to either take risks and call their bluff or allow status quo to continue. With the kind of polity we have, only the status quo will prevail.

The Chinese strategy is not based on immediate requirements. What we are seeing today was planned long back. One can see how incrementally they are building up their technical and scientific capability. Similarly their diplomacy is working according to long-term economic needs. To ensure their economic lines are secure they are building their military might. So first they start with scouting natural resources in far off countries, then they build infrastructure and then to secure infrastructure they deploy force.

India can’t do this, not because of physical incapability, but because we can’t plan and execute with similar dedication. To have a particular military hardware ten years from now requires work to start ten years ago; so Beijing must have planned thirty years back. It takes around ten years to bring together all required know-hows to start developing a cutting edge product. India has been busy outsourcing its defence purchases for kickbacks; what strategic planning can it do?

What we are seeing today is the plan envisaged by Chinese in the 1980s. The aggressive posturing by China, whether in the Sea of Japan or Ladakh, is to put pressure on the nations which have started to stand up to China and may join hands against it.

One must not forget that the new Chinese government with a new generation of leaders will make moves to consolidate its position, and the People’s Liberation Army which of late has become very powerful, will like to deter the new leaders from encroaching on its political space.

China is doing everything to achieve its stated national goals. India lacks a national perspective and objective, so it can’t plan a strategy to achieve it. This is why it will continue to react to situations with shameful impotence.