How BJP-Congress misread 2004 and 2009 results, India paid the price 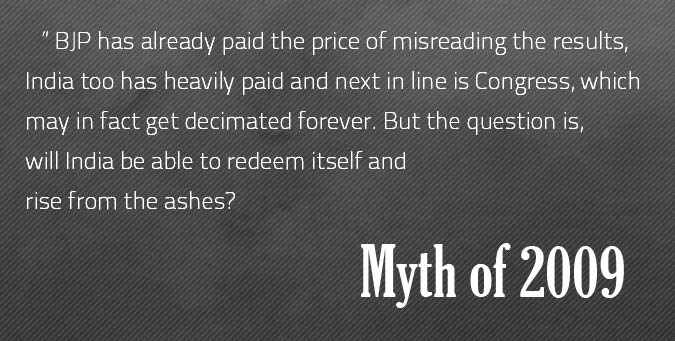 All round scams,corruption, no new jobs, high inflation, negative industrial growth, depleting forex reserves and general hopelessness is what describes India of 2013. What a fall from the days of this century being dubbed as India's century.

I am arguing in this column that this is a direct result of the 2004 and 2009 elections results being misread by both Congress and BJP.

1) That 2004 was a crushing defeat for BJP and resounding victory for Congress
2) It was a failure of India Shining campaign and therefore a vote against reforms
3) Even if remotely, 2002 Gujarat riots were to be blamed for BJP's loss

1) Congress won only 7 seats more than BJP, so it wasn't a resounding vote for Congress or against the rule of NDA.
2) If you look at the elections results closely, BJP's loss was primarily on account of the party losing it's base in UP (which gave it 58 seats earlier and only 10 in 2004) and NDA losing allies like DMK. So the cause prima facie seem to be loss of UP and of some key allies like DMK and not reforms or 2002 Gujarat riots.

Impact of misreading 2004 results was that Congress and Sonia Gandhi took this as a vote against the brilliant reforms that NDA carried out and as a result, focused entirely on so called "inclusive growth" (an euphemism for povertarianism) and dumped reforms almost entirely. So UPA-I was not only wasted on reforms push but also came out with regressive schemes like MNREGA and Farm Loan waiver.

Not only Congress but BJP too assessed 2004 results similarly and became apologetic of NDA reforms, or handling of 2002 Gujarat riots. This of course resulted in an opposition which was in a disarray, confused and which didn't oppose UPA on regressive socialist measures like MNREGA or farm loan waiver.

Indians meanwhile were still hungry for more free-market reforms but were more than content with the smokescreen created by very high growth experienced during the period, although this growth was entirely a result of earlier NDA reforms and global factors.

Amidst this background and out of nowhere, the dysfunctional Manmohan Singh, with objective of leaving a lasting legacy (UPA-II was nowhere in the picture then and he would have seen UPA-I as his final term), stuck his neck on the Nuclear deal which although Congress seemingly not being too convinced about, backed it for the sake of Sardarji. BJP, forgetting that NDA itself tried for such a deal and as right wing should have supported being pro-American, opposed the deal vehemently for the sake of opposition. And what a disaster! BJP didn't calculate that the middle class India is emphatically pro-America (wasn't there a survey?) and didn't realize that much of its base comes from middle class urban India.

Cut to 2009 elections which where fought on back of a period of high growth, low inflation (out of 5 years of UPA-I rule, only in last 10 months the Inflation was higher and hence supposedly ignored by electorate) India story still supposedly intact, recently concluded Nuclear deal, still "Mr. Clean" Manmohan Singh at helm (remember, UPA-I scams like 2G, CoalGate were not yet exposed) and the alternate on offer being Mr. Advani.

Myth of 2009 : That the resounding victory of Congress was because of populist measures of MNREGA and Farm Loan waiver.
Reality: If you look at the results closely, almost all the incremental seats of Congress were from urban areas, previously held by BJP. Now the urban areas were not the beneficiaries of MNREGA or Farm Loan Waiver, so why did they vote for Congress? My hypothesis is that urban India voted for Congress in drove because of high growth (although not to the credit of UPA but nevertheless) and surprise surprise, Nuclear deal. Middle class India got sold on Manmohan Singh's false promise that Nuclear deal will solve India's electricity deficit( has it since 5 years?) and which saw this as coming closer to Amreeka) was disappointed (or disgusted) with BJP's (opportunistic) opposition to the deal. And the rest as they say, is history...

The result of 2009 results being misread by Congress was that it became even more brazen in its corruption, more socialistic in its schemes (RTE, FSB and what not) and now completely abandoned reforms. The cock was back and within no time (in 4 years to be precise) India was staring at a 1991 like crisis!

BJP has already paid the price of misreading the results, India too has heavily paid and next in line is Congress, which may in fact get decimated forever. But the question is, will India be able to redeem itself and rise from the ashes?