Fundamental error in the thinking of Pt Nehru - Deendayal Upadhyaya 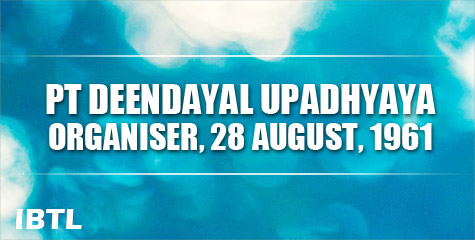 The Merger of Nagar Haveli and Dadra into the Indian union is a move in the right direction. That the Government of India should have taken seven long years to make this simple decision only shows that mental state of indecisiveness of the rulers. What Sardar Patel could do within days in the case of Janagadh, Pandit Nehru has taken years to accomplish. Besides the inordinate delay, there is a basic difference towards the issue of liberating, and integrating, areas laying outside the pale of considered it the Government’s duty to actively work for their freedom and merger and he was his armoury to achieve his objective. Pandit Nehru it seems is not prepared to shoulder this responsibility. Neither is he prepared to go to the lengths to which Sardar Patel went in the case of Hyderabad.

Apart from temperamental weaknesses and hesitancy, there is a fundamental error in the thinking of the Prime Minister. He thinks within the frame-work of the Government of India Act of 1935 or the India Independence Act of 1946. The Sovereignty of India accordingly is limited to the territories handed over to her by the Britisher and/or to States that join the dominion. In all other cases the people of the different areas are to be the architects of their fate and their future. If they desire to be independent, they must struggle. The status that they would enjoy is also to be determined by them. This line of thinking ignores the basic fact of India being one. It does not recognise the existence of an Indian nation, which by historical accident came under the dominion of a number of Western powers. If the tiny territory of Goa was, and is ruled by Portugal while the rest of the country was under the British rule and now independent, it did not and does not in any way create a separate Goanese people. The people of Goa are part and parcel of the Bharatiya Nation. The struggle for the liberation of these territories is therefore an integral part of our freedom struggle. Those who say that the people of Goa themselves should fight for their independence are propounding a theory which is dangerous and unnational.

The merger of Nagar Haveli and Dadra has been effected in accordance with the wishes of the people of these areas. It is good and natural that these people have chosen to become part of the political set-up of the country. But any insistence on the right of these people to determine their future deprives the people of India their fundamental sovereignty over the whole land. It is on this account that the French enclaves in spite of their de facto transfer to India have not yet become part of the India union. The Government is waiting for a legal flat by the French Government. Why should we look to the French for legalising the transfer? The territory is ours and if the French have given it peacefully, it can be credited to their good sense or common sense, but it cannot confer upon them any legal title to hold the areas even technically. Our Constitution gives us a right to acquire territories and we should act accordingly. Let the French take care of their Constitution. Let them amend or mend it, and at leisure. But we cannot delay the process of our national integration.

Nagar Haveli and Dadra, like the French enclaves, have been kept as a separate unit. They are to be administered under the External Affairs Ministry. It is wrong. The areas should be straightway merged with the adjoining districts. That alone will demonstrate our unity with these people.

With regard to Goa, the Bharatiya Jana Sangh had all along felt that the problem can be solved only by police action. It is a matter of satisfaction that the political opinion in the country has veered round to this view. Even the Prime Minister, who had all these years persistently refused to take resort to military force, has said that military action cannot be ruled out. It is a major change in the Government’s policy and is in the correct direction. For the first time after Sardar Patel, Government spokesmen have asserted that the military can be used for the purpose which it is being maintained for. But there is a feeling in the people that all this talk is meant only to please the electorate.

The stiffness on the Goa issue is also meant to divert the attention of the people from the Government’s failure on other fronts, notable the China and the Pakistan fronts. It is for this reason that the communists who had practically forgotten Goa have again become active and a new committee headed by Srimati Aruna Asaf Ali has been formed.

Whatever be the motive, liberation of Goa is desired by all. But when shall the Government do it? Will they take some active steps or simply fight a verbal battle? The people, who have been accustomed to such declarations, will not feel satisfied without any practical steps. Pandit Nehru will be wrong if he thinks that he can dupe the nation simply be verbal assurances. Let him fulfil his assurances not within his life-time but before the elections if he wants to reap its advantages for his party.

Even before steps for the liberation of these territories are taken, it would be desirable that the Goans living in the Indian union are granted Citizenship and franchise rights. It will establish our bona fide and demonstrate that we look upon these people as part and parcel of our nation.