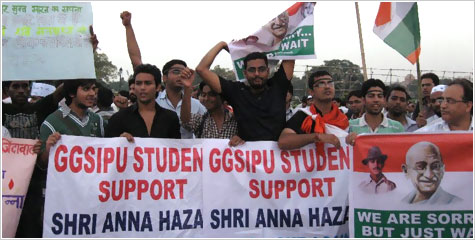 Even as crusader Anna Hazare's campaign entered the second day on Wednesday, Indraprastha University Students in the city came forward to do their bit to support his agitation. A student & activist of Dharampeth School, Vibhor Anand, said students from his school collectively planned to join the protest to extend their support against corruption. Other Students joined the protest Himanshu Rajput, Siddharth Tomar, Vaibhav Rana, Amar Nath. Vinod Dev a social activist, Entrepreneur were also there and said, "Enough is enough now this is high time for us to develope a neat and clean society  & we're trying to make INDIA a better place to live in"

The demonstration showed the power of students and their urge to make a difference. "We are trying to change nothing more and nothing less than a whole system in the nation that is marred by corruption’’ a student participant in the protest said.

“The Anna Hazare movement against corruption has gained momentum to shackle corruption from the highest seat of governance to the greed of the common man. While the government is being targetted en masse, some of the questions raised are related to what is the private sector doing about corruption? What are individuals doing about it? How can employees of India Inc., take on this challenge boldly and decisively,” ipaidabribe.com coordinator T.R. Raghunandan said.
—With agency inputs