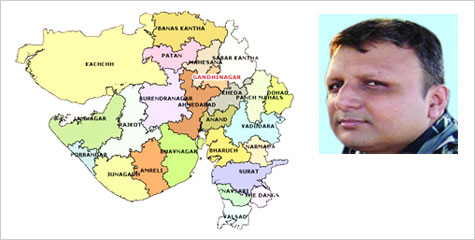 In this age of 24x7 electronic media reinforced urban legends, truth is often what anchors want us to believe. A case in point is the stark contrast with which Bihar is made out to be a haven of Muslim inclusivity and Gujarat a hell. Yet, according to the Union Ministry of Minority Affairs, 35 Muslim groups benefit from OBC quota in Gujarat, compared to 24 Muslim groups in Bihar.

Only five States had provided reservations to more than two Muslim groups within the OBC quota of which just one State, Kerala, has been ruled by the Congress or the Communist parties. All the other four States providing a long list of Muslim groups with OBC quota were BJP/NDA-ruled States, including Karnataka and Madhya Pradesh.

In this age of 24x7 electronic media reinforced urban legends and media myths, it would seem truth is what the anchors want you to believe. A case in point is the stark contrast with which Bihar is made out to be a haven of Muslim inclusivity and Gujarat a hell by the media. A contrast that is deliberately sought to be amplified by these same media pundits who hold up the Bihar Chief Minister as an ideal of tolerance, inclusivity and secularism while running down the Gujarat Chief Minister on the same issues. Small wonder we see little debate in the Delhi-based media over the Bihar Chief Minister’s conscious political visits to temples during pre-election yatras where the line between the political and the administrative was fuzzy. It is also no surprise that we see practically no outrage on alleged acts of intolerance of dissent by the Bihar Chief Minister over some negative remarks in Facebook by Government servants who were recently suspended.

It would, however, be a disservice to the efforts of both Mr Narendra Modi and Mr Nitish Kumar, who remain two of the most performing Chief Ministers in India, if we were to reduce this public debate on Muslim empowerment or inclusivity to a false polemic over personalities. It was with great distress this columnist noted an open letter from Aijaz Ilmi to Chetan Bhagat earlier this week fall prey to the same false polemic over personalities. Aijaz Ilmi was responding to a column by Chetan Bhagat earlier in the week on Muslim vote-bank politics.

Aijaz Ilmi incidentally was one of the few bold Muslim commentators who saw the Allahabad High Court judgement on the Ayodhya title dispute as an opportunity to solve that intractable problem. Aijaz Ilmi’s open letter makes extensive references to the Sachar Committee report on the economic and social backwardness of Muslims while lamenting the lack of what he calls “an honest chance for a decent living and equitable opportunities” for Muslims.

It would be a mistake to dismiss Aijaz Ilmi’s open letter as a stereotypical response. A debate needs to be forced on who has the best policies and ideas in general to meet rising aspirations and more specifically in the Muslim context and which ideas are creating opportunities to empower the Muslim spirit of enterprise within a level playing field.

This is a debate nobody in the media wants to have and proof of this comes from the speed with which the media has buried the story over the reported remarks by PDP’s Mehbooba Mufti on the efforts of a Muslim entrepreneur to set up shop in Gujarat. It should surprise nobody that the Left-liberal bias in the media has ensured not one media outlet has even attempted to seek out who that Muslim entrepreneur was or bothered to elaborate on what exactly was his experience.

In fact, for all the talk of Muslim backwardness and consequent need for inclusive policies even the Sachar Committee report that Aijaz Ilmi quotes from extensively in his open letter, is also stunningly silent on the needs and challenges of Muslim entrepreneurs in seeking a level-playing field. While the report dedicates an entire chapter on access to financial credit and financial inclusion, it barely goes into specific issues and challenges of an aspiring Muslim looking to expand opportunities beyond self-employment through entrepreneurship.

Despite recognising the fact that many Muslims are self-employed the entire thrust of the Sachar Committee report, it would seem, was more focussed on how Muslims must remain employed within public or private sectors as opposed to how self-employed Muslims could be empowered to expand their enterprise. One sees the same refrain of dependency on others’ for employment in Aijaz Ilmi’s open letter as well with little advocacy on advancement from self-employment to entrepreneurship.

The tragedy for the Muslim community in India is that much of the debate on its socio-economic fate is conducted with politically prejudiced blinkers on. Be it on entitlements with the OBC quota as a case in point or on opportunities with the Sachar report as a case in point, false polemics between Gujarat and Bihar, Mr Modi and Mr Kumar have taken precedence over facts and reality.

One hears of a Dalit entrepreneurs conference to be held in Delhi later this year premised on the idea of ‘fighting caste with capital’. Perhaps it is not a bad idea for a similar Muslim entrepreneurs conference to debunk some commonly held myths on the kind of political environment that ensures a level-playing field for them. If not anything else, such a conference might give Aijaz Ilmi something more than a Left-liberal Sachar Committee report to quote from in a future open letter.