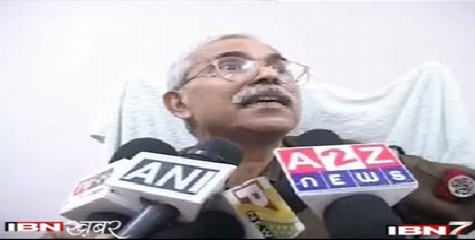 Senior IPS officer, DIG in Fire Department, D D MIshra has been forcefully admitted to a mental hospital. His fault was that he had alleged the Mayawati government of corruption and conspiring to eliminate him for not colluding with her corrupt practices. Mishra had pointed fingers at the Fire brigade purchase scam. He had publically spoken that he is feeling relieved after scribing on the Control Room register that everything is rot in this government and no bigger scams are possible, than the ones that have already taken place under Mayawati government. He had even expressed his fear that IAS Harminder Raj was also murdered.

Mishra, an officer with unblemished record and reputation of honesty, had been continuously been pressurized of colluding in committing fraud, and even of saving the corrupt officers and when he couldn't tolerate it, he took this drastic step. Mishra, soon after, was forcefully evicted from his office, with his nameplate removed too.

This has once again brought into open the naked brutality of Mayawati government and her obscene love for robbing the exchequer against which yet another honest soldier is on the verge of attaining professional martyrdom. It's a pity that the opposition is so conspicuous by its absence that despite her corruption being obvious to the public, she has displayed the audacity to consider advancing the elections, and she hopes to return to power