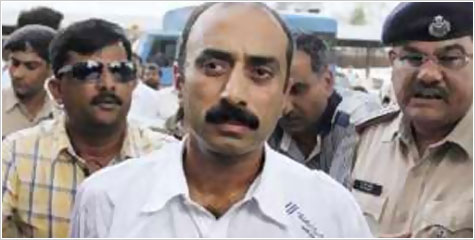 Sanjeev Bhatt, whom a section of media hailed as 'whistle-blower' has been denied bail by the honourable Supreme Court of India. The Supreme Court of India, which has for past few months earned the reputation for being an able protector of truth and virtue in a country otherwise marred by all-around corruption under a regime that's been termed by many, the most corrupt in Independent India, today offered this big setback to suspended Police officer Sanjeev Bhatt who is accused of several crimes including murder.

The apex Court refused to grant him relief in a 21-year-old Jamnagar custodial death case of 1990. A bench comprising justice P Sathasivam and justice BS Chauhan asked him to withdraw his case and approach the lower court in this regard. The court said that it won’t interfere in the Gujarat government’s decision.

The Supreme Court is also to hear another petition filed by Bhatt seeking the transfer of the probe into an email hacking case against him to the CBI, which has recently been constantly facing Supreme Court's rebuke for inefficiencies and political parties' criticism for playing under the hand of ruling Congress party. Additional Advocate General of the Gujarat government Tushar Mehta had filed an FIR against Bhatt accusing him of hacking his email account.

Bhatt was arrested in September for forcing a police constable, KD Panth, to sign a false affidavit about his attending a meeting called by the Chief Minister soon after the Godhra train burning that sparked the riots. Although, Bhatt alleges Modi government of being revengeful and has been even termed as a 'whistleblower' by some sections of media, while the Supreme Court is not even ready to grant him bail considering the nature of his crimes.

Sanjeev Bhatt not a Whistle blower