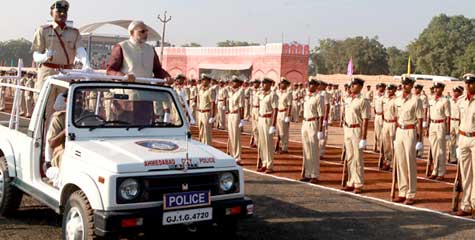 Gandhinagar, Wednesday: Chief Minister Narendra Modi today took guard of honour at the impressive passing-out parade of record 530 Police Sub-Inspectors (PSIs), including 68 women, at the Gujarat Police Academy at Karai. The occasion was the conclusion of their selection through a transparent procedure after a one-year training course.

Speaking on the occasion, Mr. Modi exhorted the fresh batch of police officers to accept the challenge and onerous duty of ensuring safety and security of the society in the role of ‘Policemen as Friends of the People’. He said that the Police Force in Gujarat is the most efficient and best equipped to deal with the most difficult situations.

While the nation is seized with such internal security problems as terrorism and Naxalism, he said, the pattern of crime has undergone sea change with application of technology in the changed circumstances. He said the responsibility of uniformed men too has increased manifold with round-the-clock duty, stress and strain, and risk to life associated with the job, but at the same time maintaining a humane approach to the situation.

The Chief Minister has asked the State Home Department to develop a 100-hour module in collaboration with Rakshashakti University in which each trained police officer would serve as mentor to junior colleagues and constables for 18-months.

He inaugurated on the occasion and ports complex and a swimming pool for the trainees at the Police Academy.

Gujarat Police Academy Director A.K. Singh in his welcome address said that it was for the first time in the history of Gujarat that as many as 530 PSIs, including 68 women, passed out in one batch. They were imparted training in latest technology with scientific approach for combat situations.