Now, a fatwa in India against Surya Namaskar 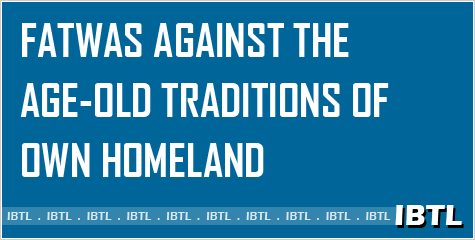 This has come into light as India looks forward to the pan-Indian festival of Makar Sankranti when the Sun-lord is worshipped. The festival is celebrated in different parts of India with different names such as Uttarayan in Gujarat and Rajasthan, Maghi in Haryana, Himachal and Punjab, Pongal in Tamilnadu, Bihu in Assam, Shishur Saenkraat in Jammu, Makara Vilakku in Kerala, and under the name Sankranti in rest of Indian states. Even in Nepal, Thailand, Laos, Myanmar and Cambodia, it is celebrated under different name.

To celebrate this ancient festival in reverence to the Sun, the Madhya Pradesh government, is organising Surya Namaskar sessions. It aims to create a Guiness World Record in the name of India with millions of school students performing the yogic exercise, Surya Namaskar on January 12th. But Muslim clerics have issued the above cited fatwa against it calling bowing before the sun as idolatrous and un-Islamic. Islamic clerics are known to oppose even the Indian ritual of touching the feet of one's elders and even the salutation 'Namaskar' terming that too as idolatrous and insulting to Allah.

Not just a fatwa, but Muslim leaders have even threatened to go to court.

The State School Education Minister of MP, Archana Chitnis said that the participation was not mandatory. She stated that Sun has nothing to do with one's religion. "Surya Namaskar is a healthy yogic exercise. And we are not imposing it. Those who don't want to participate, are most welcome to drop out. Surya Namaskar is a healthy exercise which has been ratified by scientists and health experts across the world."

It is noteworthy that traditional Indian practices such as Yoga have already been adopted by the World, and even Surya Namaskar is getting popularity in countries like America. The Hindu Swayam Sewak Sangh, the overseas branch of RSS, has been organising SNY - Sura Namaskar Yojana sessions in the week of Makar Sankranti in hundreds of US cities and Universitiy campuses, and its popularity is increasing every year among Americans.

It is ironical that while foreigners are welcoming Indian practices, Indian muslims are issuing and following fatwas against the age-old traditions of their own homeland.