Swamy against Minority reservation, warns not to be duped by Sonia's bahu image 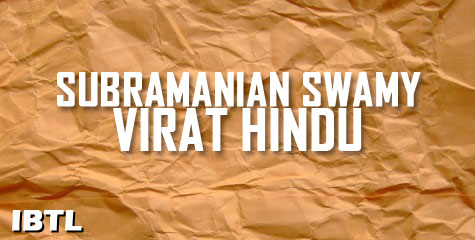 Jaipur : Janta Party President Dr. Subramanian Swamy addressed the gathering a Jaipur in his trademark style. He cited how he asked Manmohan Singh about the 2G scam but the latter didn't know anything. Swamy quipped how Manmohan Singh understands only two 'G's, Sonia Ji and Rahul Ji and that suffices for him. Dr. Swamy said that the government is out to give reservation to Muslims as a whole, terming them poor. He asked if Kshatriyas and Brahmins are not poor. Dr. Swamy asserted that none other than SC/ST should get reservation and they too should get it for only one generation. He reasoned it out by saying that those classes which have historically been ruling classes should not qualify for reservation. Muslims ruled India for centuries and thus must not be entitled to reservation.

He recollected how on being asked why he's after Sonia Gandhi, even when she's the daughter-in-law of the country, and conducts herself according to Indian tradition and life-style, he had replied that Ravan too had maintained the guise of a sage while he came to abduct Seeta ji, and hence, no one should be duped by Sonia's outward appearance.

Swamy further said that Consumerism is a motivation behind corruption. It has given birth to greed and earning money by hook or by crook has become a priority for people. He blamed Nehru for adopting Soviet Model and Quota, License system while opened the gates for loot. Dr. Swamy reminded how money was never the primary goal in Indian culture and corruption is because people are forgetting their cultural values.

Swamy also talked about Hindutva. He reminded that we need not be proud of sheer numbers and a herd of goats can be driven away by a Lion, and how a mighty lion is also controlled by a ring-master. The roots of different world civilizations lie in India and Indians must establish a connect with their own roots. He asserted that Hindus should vote as Hindus and even if 35% of them do so, they can get a Hindu-caring government at Center, one which would not be corrupt and would not be spineless to be ashamed of building a Ram temple at Ayodhya.