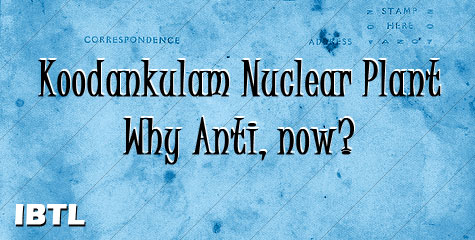 Ranganaathan introduces IBTL readers with the equations behind the issue of Koodankulam Nuclear Power Plant and the controversy surrounding it.

Brief about TN caste equations: In Tamizhnadu, Dalits have been oppressed for long period post independence by OBC/BC communities. The root of the problem lies with Christian missionaries who converted the Dalits, also part of the OBC/BC communities, but the OBC/BC never treated Dalits as equal.

So its always Dalit Vs Nadar’s, Dalit Vs Thevar’s, Dalit Vs Pallar’s (another SC community), Dalit Vs Mudaliyar, Dalit Vs Gounder, Dalit Vs Vanniyar. There is long list, but demographically this is the wide context. Irony is that Brahmins rarely oppressed Dalits, in fact they allowed them free will to live & used to protect them from these OBC/BC. Post independence, Christian missionaries propped up OBC/BC against Brahmins, ensured that the Brahmin population voice was stifled. You may find reference of Justice Party, Dravida Kazhagam, DMK, which all ensured Brahmin hatred.

In South TN, Tirunelveli, Tuticorin Dist are predominantly Nadar community. The class division in Nadars was used by Church to convert the economically deprived Nadar to Christianity. Also around 10% of population of Dalits were converted to Christianity. Church used the caste, to open up caste based churches, but Nadars controlled the Dalits, through the Church. Though the Nadars were divided on religious lines, they found themselves unified post independence during Kamaraj regime & moved on to being a dominant business community.

History of KKNP : During 1989 DAE through the local administration started acquiring land for the KKNP project through Emergency acquisition laws, part of the land for the Plant, to the extent of 1105.7 Acres of land were acquired from a group of land owning class of Hindu Nadars. These landlords were promised jobs, other than the compensation which was provided to them during acquisition. Promises were given that the project work will commence in 1992 and the 50 neighboring villages in the District will get lot of job opportunities and the economy would improve among the villagers especially the landowners, whose family would be benefitted by jobs. The then District collector had promised that at least one person from the landowners would be given good and permanent job opportunities in the project and their life would be safeguarded.

These landlords fought for enhanced compensation in Supreme Court vide I.A. 254/2000 in O.S.No.215/98, which in due course they lost. There was another issue they won & indirectly the landowners got compensated by a few crores, though that would be not much of importance in this context.

Present issues : There are widely 4 issues which I would perceive as the reason behind this Anti-Nuclear agitation.

1. The Nadar community stand to benefit because of the plant being operational. Most of their wards have completed their education, might get compensated by way of jobs at the plant.

2. The plant is surrounded by villages, the main occupation being fishing for these folks. Most of these fishermen are converted Christians, the church depends on these folks for their survival. The politically connected Owner of trawlers in nexus with Church priests, wanted fishing activity to continue. The fishermen would be displaced as the sea would be banned for fishing. Already every village has a watch tower, set up by the Coast Guard & the villages are being monitored.

3. For the last few years, there is a group which is very active in illegal sand mining, to the extent few villages the sea water has reach the doorstep of the residents, during high tides. The sand in these areas are rich in radio active material, which is already being illegally mined, the radio active material separated & sneaked out through Tuticorin port, thanks to DMK/Sasikala group who were getting their regular share in this business.

4. Tuticorin port is the most porous port in terms of security, as it was till few weeks back controlled by a Dalit leader Pasupathi Pandian, who was involved in various illegal activities including gun running, smuggling rackets. Pasupathi Pandian was killed recently by his rival Nadar gang. (Though its another story, which we do not want to go into details)

The surrounding villagers had been given notice to vacate the area by the DAE/Local Administration (during DMK regime), but none discussed with them about rehabilitation nor compensation.

During Aug’11, when the plant was started up for trial run/inspection, the sesmic activity in the neighboring villages was violent enough, that the fishermen folks got scared. Also by this time the Coast Guard started setting up monitoring towers in all villages, informed the fishermen about the portion of the sea which they used to venture for their livelihood as ‘No fishing Area’. This event was narrated by my friend who hails from nearby town panchayat.

This fear by the fishermen & uncertain future of livelihood was used by Church/NGO’s to start the agitation. The plan was well executed, by church as they saw their population being displaced & thereby they would loose their profession (Am sure you would agree every church/its priest is like a professional, than hold any sanctity for God’s message). On the other hand, this project was a Russian project, which if successful could be replicated in other parts of this country. The vested interests namely, American majors were not ready to allow success of this project.

I would not discount that the other two major cartels, namely smugglers & illegal sand mining mafia would be funding indirectly to this Anti-Nuclear to protect their interests.

But the main backup is from American Nuclear companies in nexus with the church, which is playing up. Both of them stand to loose a lot, for the Church would be without their followers & for Cos, this success could seal their business promotion. The other two cartels could use this as political issue for the present AIADMK govt., as these cartels are predominantly DMK/Sasikala group. TR Baalu has large interests in Shipping from Tuticorin port, most of it illegal.

The PMO was well aware of the Church involvement in this issue, since if you recollect, PMO delegated a senior officer to negotiate truce with the Catholic Church of India, immediately after the crisis started.

Another Q, which arises now is that why did this present Govt. support the Anti-Nuclear forces & pass a resolution in the Assembly?

After winning thumping majority AIADMK had appeased Christians throughout TN. (Waiting for the caste based census to reveal officially the figures of Christians in TN) The Panchayat elections were scheduled just And when the present CM came to know through her IB officials that the Church was behind it, she set out imm. To pass a resolution in the Assembly or else DMK would have started agitation & created a headache. This was purely to neutralize DMK.

Conclusion: Anti-Nuclear Struggle could be neutralized by -

1. GOI/DAE should take into confidence the people of the surrounding areas.
2. Resettle the Fishermen, with alternate profession for their livelihood.
3. Provide with adequate compensation for the surrounding villagers.
4. Provide jobs as promised to the Land owners whose lands were acquired for the plant.

Most of this work has to be done by GOI, but it seems they are not willing to do anything. The reason could be the American Nuclear cos. Do not want this project to succeed.