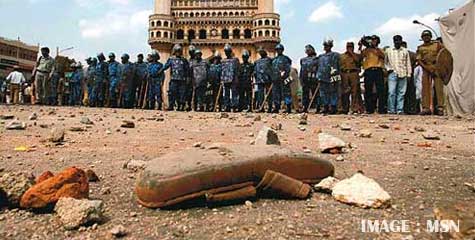 In an allegation that, if true, has the potential to shock the conscience of the nation and specifically the Hindu society, the two accused of Ajmer Blast have filed petitions in the Ajmer an Bhopal courts, alleging that the NIA officers offered them a bribe of 1 crore to name RSS' senior officers in connection with the Sunil Joshi murder and Ajmer blast.

While NIA, formed by Congress-led UPA government to investigate terror cases, has been often accused of being just an instrument in the hands of the government to create a ghost of 'Hindu terror' while hiding the perpetrators of Jihadi terror by Hindu groups, this time, proper petitions have been filed in two courts citing the names of the NIA officers who during the enquiry held between April 16th and April 19th, offered the two accused, Mukesh Vasani and Raj Singh, a bribe of 1 Crore Rupees plus a promise that cases against them be dropped if they name RSS' leaders for the murder of Sunil Joshi.

The petitions have been filed in the special courts of Ajmer and Bhopal by their counsel Jagadish Rana. Rana even accused the central government to be directly dictating it to the NIA and the petitions reportedly include the name of a DIG level officer of NIA, among others, who made this offer. The petition also alleges that the accused were mentally harassed for not succumbing to the pressure of falsely implicating RSS' leaders.

It is worth remembering that renowned social activist and the founder of Muslim Rashtriya Manch, an organisation working for over a decade to bring the muslims of India in mainstream, senior RSS leader Indresh Kumar was earlier charged of the same offense by Rajasthan police. However, despite so much time having passed since then, NIA has not been able to find or fabricate any evidence against him.