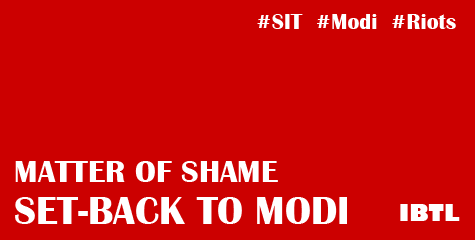 This is not the first instance when the mainstream media has shamelessly indulged in twisting facts and selective reporting to pursue an agenda. On this front, the #paidmedia, as it is now popularly called, is no less than religious propagandists like Zakir Naik who quote scriptures selectively and infer grossly wrong meaning from them. Similar is the case with India's mainstream media, especially when it comes to Narendra Modi. The latest instance of this, we saw with this amicus curiae report, which can be downloaded from below.

In the first part of the report, it mentions how in his report dated 20th January 2011, the amicus curiae had recommended that Modi be probed in connection with the allegations made by Sanjeev Bhatt an regarding the Narodra Patia and Gulberg society case. The report recollects how the Supreme Court ordered the SIT to pursue this investigation and submit its report. The SIT recorded the statements of 48 witnesses and submitted the report. The court decided that the amicus curiae will independently assess the recorded statements of witnesses and examine the SIT report. The report further recollects how the SIT reported that while the meeting about which Sanjeev Bhatt has made the allegations against Modi, was indeed held but no such instructions "to let Hindus vent their anger" were given by Modi. Amicus curiae goes on to mention that SIT reported that the two ministers posted at the State Police Control Room did not influence the police in anyway. Next, the report elaborates about amicus curiae's interaction with the people concerned like Sanjeev Bhatt, PC Pandey and several others whose names are mentioned in this report including Teesta Setalwad.

The amicus curiae quotes the findings of the SIT with regard to Sanjeev Bhatt's allegations and why SIT believes he's lying, before contesting the same.
"The SIT also discredits Shri Bhatt by pointing out that his version about a subsequent meeting at the Chief Minister’s residence on 28.02.2002 at about 10:30 hours cannot be believed because his mobile phone records show that he was at Ahmedabad at 10:57 A.M., and therefore could not have reached Gandhinagar before 11:30 A.M." The amicus curiae report goes on to say, "I am left with no doubt that he (Sanjeev Bhatt) is actively 'strategizing', and is in touch with those who would benefit or gain mileage from his testimony. But these factors, in my view, cannot be grounds for ignoring his statement at this stage."

However, the report proceeds to say that there is no documentary evidence to disbelieve Sanjeev Bhatt's statements and it is his words against his seniors words. It says, "I am of the view that Shri Bhatt needs to be put through the test of cross-examination, as do the others who deny his presence." and further, "... whether Shri Modi had indeed made such a statement (as spoken to by Shri Bhatt) can only be decided by a court of law."

The report briefly digresses to discuss the accusations against M K Tandon, the then JCP, Ahmedabad, Sector-2 and P B Gondia, then then DCP of Ahmedabad Zone-IV.

The report says that the Ministers were posted with Modi's consent but there is no evidence to show that they interfered with Police functioning. "There is an absence of material to indicate that the statement of Shri Modi, allegedly made in the meeting on 27.02.2002, had been actively implemented by the Ministers or the 2 police officials who participated in the said meeting."

Thus, the amicus curiae report says that while Sanjeev Bhatt's claim cannot be established to be false without being cross-examined in court, even if the claim were true, there is nothing to show that Modi's alleged 'instruction' of allowing the Hindus to vent their anger was at all implemented at any level.

And now, the most important lines around which the mainstream media created all their stories. "Hence, the question to be examined is whether the making of the statement by the Chief Minister in the meeting on 27.02.2002, by itself, is an offence under law. In my opinion, the offences which can be made out against Shri Modi, at this prima facie stage, are offences inter alia under Sections 153A (1) (a) & (b), 153B (1) (c), 166 and 505 (2) of the IPC. .. However, it would be for the Court of competent jurisdiction to decide whether Shri Modi has to be summoned for any or all of these offences, or for any other offence(s)."

Read the above lines. The amicus curiae has just opined that Modi "can be" tried at the same time conceding that it is for the court to decide if at all Modi should be summoned. Not only this, the report further says, "I would respectfully submit that this Hon’ble Court ought not to express any view on the merits. Any finding by this Hon'ble Court in these proceedings, even prima facie, would be detrimental to the accused or the Complainant, as the case may be. This Hon'ble Court may leave the matter to be adjudicated by a court of competent jurisdiction."

So, what the amicus curiae actually 'recommends' to the Supreme Court that appointed him, is that Supreme Court should not pass any comment and let the lower court take its course and decide if the closure report is to be accepted or not. And, in the final section of his report, Amicus curiae Raju Ramachandran mentions all the points of the SIT report with which he agrees completely. Point no. 48 among these points accepts SITs observations about the steps taken the Narendra Modi to CONTROL the riots.

"As far as the SIT’s conclusion with regard to the steps taken by the Chief Minister Shri Modi to control the riots in Ahmedabad is concerned, the same may be accepted, in the absence of any evidence to the contrary."

Another point reads, "Similarly, as far as the observations of the SIT with regard to the Chief Minister’s statement on television on 01.03.2002 are concerned, the same may be accepted."

The entire report can be downloaded from here.

It is a matter of shame how all this was selectively reported to sound like a "set-back to Modi". How the media created issues of the "topi" episode and recently Nitish Kumar shaking hand with Modi was also for everyone to see. While a massive crowd greeted Modi recently in the Biharis gathering, the same was thinly reported, and that too with headlines like "Modi tries to woo Bihari voters in election year". Perhaps, our mainstream media forgets that Modi is already too popular and doesn't need to "woo" Brahmins or Biharis as media wants us to believe. This compartmentalization of people into sectarian identities is what petty political leaders and parties thrive upon, and so does the mainstream media, and Narendra Modi is too big to stoop to such politics, contrary to what the mainstream media projects.