Gujarat's police force is the youngest in India! 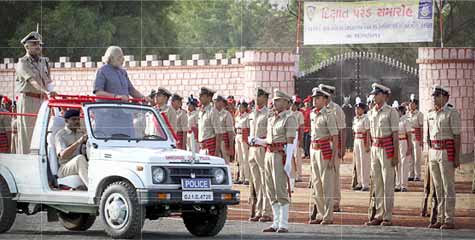 Lauding the services of police force Modi said the credit for the atmosphere of peace and law and order during last decade goes to the State police. “The crime rate in the State is the lowest in the country. Gujarat has not seen the instances of curfew during last decade. Gujarat police is better than the police of any other State”, he said. Modi suggested putting success stories of every police stations of the State on the State police’s website.

Modi said that intelligence services have a crucial role in entire security scenario, but unfortunately it has been treated with indifference in the country. Gujarat has initiated in this direction and linked it up with the courses of Rakshashakti University, Forensic Science University and Gujarat Law University with a view to modernize the services of police force, he said.

Chief Minister praised the ‘100 man hour training module’ which has been prepared by around 660 police inspectors for giving training and sharing their experience to the constables under them. This module has benefited around 22,000 police jawans. “State government has planned to expand the scope of such 100-hour training to all the cadres of police force including the officer-level. It is only Gujarat in entire country which has chalked out such a well-though-out structure for police training”, he said.