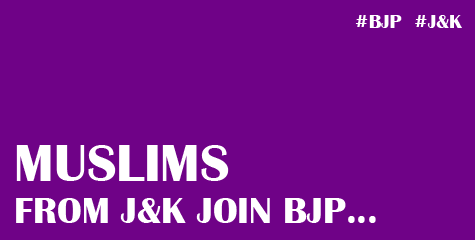 In a development that will be nothing short of a horrifying nightmare to the industry of pseudo-secularists, politicians or otherwise, a large number of Muslims from outskirts of Jammu joined the BJP. They are reported to have expressed faith in the policies and programmes of the party.

State president Manhas termed this joining as the victory of the pro-people policies and principles of the party. He said that BJP was the only political party which had been agitating on roads and fighting inside Parliament and Assemblies for the cause of the common masses. He said that not just Hindus, but even Muslims of Jammu were discriminated against by the successive state governments.

Jitendra Singh pointed out the fact that BJP was the only secular political party in the country and false propaganda against it was spread by pseudo-secularists in the Congress and other regional parties, which practised the politics of religion and divided society on caste and communal lines.

It is unlikely to be reported in mainstream BJP-bashing media. The political reactions from other parties are awaited.