Insult of Vande Mataram in Kashmir University - Is there a limit to our restraint? 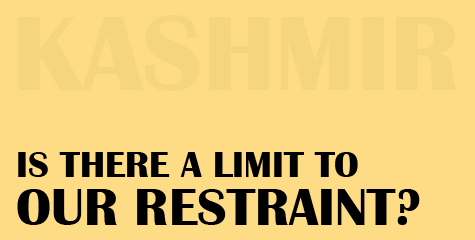 Indian nationalism once again witnessed a severe blow by the separatist mentality in Kashmir valley when Muslim students in a function at the Kashmir University, refused to sing the National Song Vande Mataram in the presence of Governor A N Vohra. In an apparent bid to demean the National song, these students remained seated while it was being sang and hence, deliberately insulted the song.

A shocked Governor asked Riaz Punjabi, Vice-Chancellor of the university to probe the happening. But to his utter surprise and a disgrace to his position, VC refused to obey the Governor and rebutted him openly. In an apparent disgrace to the Constitution, the Chief Proctor of the University Md Afjal Zargar responded to Governor stating that the honoring of national song was a ‘personal matter’ and they could not order students to honor it, nor could they ask them to stand while Vande Mataram was sung.

Actually, The VC knows that ‘Secularist Atmosphere in Kashmir favors insult of Indian Traditions and Nationalist Symbols . But the larger question still remains:

‘Who is guilty for this Degenerated state of Kashmir valley?’

The Perpetuation of the (Muslim) League’s ideology (of pre partition days) must be countered firmly both ideologically and practically.