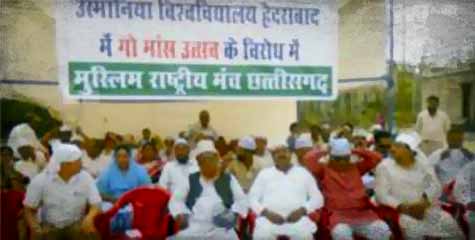 The members and activists of the Muslim Rashtriya Manch (MRM) Chhattisgrah State staged a massive dharna to protest against the blatant use of beef in the name of ‘Beef Festival’ organised by some ‘Dalit’ students of the Usmania Univesity at Hyderabad.

The dharna staged at Budhapara was attended by over 200 Muslims including religious leaders and women. Addressing the activists MRM National Convenor Mohd Afzal, who had come to Raipur for the MRM Central Committee meeting, denounced the ‘Beef Festival’ in strongest words and demanded a complete ban on cow slaughter and use of beef. ‘Cow slaughter is against our culture. Such festivals are detrimental to our culture and therefore we demand a complete ban and strong punishment to the organisers of this ‘Beef Festival”, Afzal said to the thunderous applause from the audience.

Describing this event as an attempt to wedge a divide between the Hindu and Muslim community Afzal blamed the forces behind this incident as anti-India and enemy of this country and its people. People should come forward to denounce such attempts, he said.

Dr Salim Raj, Convenor of Chhattisgarh unit of MRM said that such festivals should not be organised at the University. Organising such events would create communal divide and tension. Dr Raj demanded stern action against the organisers of the ‘Beef Festival’.

Shahjad Ali from Agra said that all communities in our country should respect the feelings of each other and thus create an atmosphere of communal harmony. In such a situation, organising festivals like this in university campus is a direct affront on the communal harmony and peace.