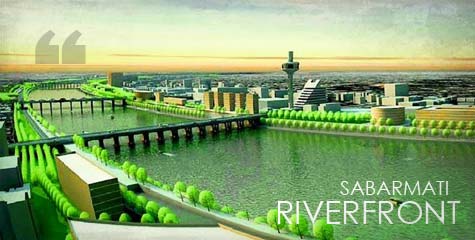 Sabarmati Riverfront among the most innovative projects in the world according to leading international advisory firm KPMG.

The project is an urban regeneration and environmental improvement initiative: KPMG
KPMG, one of the world’s top advisory firm has included Ahmedabad’s Sabarmati Riverfront Development Project in the list of ‘100 Most Innovative Projects’ towards urban regeneration that make cities livable as well as sustainable.

A release by the KPMG about the Sabarmati Riverfront states, “The Sabarmati Riverfront Development Project is an urban regeneration and environmental improvement initiative currently under way in Ahmedabad, Gujarat. It involves the reclamation of a 10.5 kilometer stretch of the banks of the Sabarmati River, creating a new public space for cultural and civic institutions. Along the river, space will be made for recreation use and markets. The aim is to transform the stretch of river from a geographical divider in the middle of the city to a focal point for leisure and recreation.”

Recently, in April this year the Ahmedabad Municipal Corporation (AMC) received HUDCO National Award 2012 for innovative infrastructure development for the Riverfront Project. On an earlier occasion, the Sabarmati Riverfront project also bagged the Prime Minister award for the best concept and design of a public project. In 2006, the Sabarmati Riverfront Project was the recipient of the National Safety Council of India, Safety Award (Prashansa Patra).

Since eternity, rivers have been the cradles of civilization even giving a unique identity to urban space. Ahmedabad has been blessed with the Sabarmati River, which has served as a lifeline for Gujarat and its people. However till the last decade the Sabarmati had come under increased strain. It began to be known as a ‘ground’ for cricket matches and circuses rather than a river.

Since Modi took over as Chief Minister in 2001, he decided to give immense importance to the re-development of the Sabarmati River front. Apart from serving as an icon for the city of Ahmedabad, the project will bring a marked environmental improvement in the city by allowing retaining of ground water and providing cleaner water to the city. It also provides a green coverage in the heart of Ahmedabad.

For the city, the SRFD Project implies more recreational spaces as well. This includes parks and gardens and even spaces for cultural facilities. The Riverfront will also be home to adventure activities that would be enjoyed by people from Ahmedabad and nearby areas. Just recently, the AMC announced that it is considering floating busses on the Sabarmati. The Riverfront was put on the tourist map when it hosted the annual International Kite Festival this year, which draws participants from all across the world.

Not only this, the SRFD will strengthen and upgrade informal markets, which will be of immense economic importance to the poor. All in all, the Sabarmati Riverfront marks a wonderful blend of innovation and pro-people governance that will write a fresh chapter in the history of urban development in India.