Saints protest against the illegal structure built on the ancient temple, Subhash Park 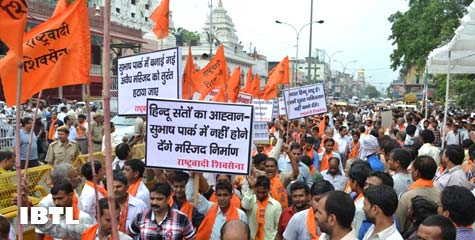 New Delhi. Prominent saints across Delhi today protested for Subhash park opposite Lal Quilla. Thousands of followers and other nationalists gathered in front of Gauri Shankar Mandir in Chandni Chauk today at 11.30 AM and raised their voice to demolish the illegal structure built on the ancient temple wall made by Pandavas, defying law & order of the country.

हिंदी में पढ़ें : सुभाष पार्क से ढांचा हटाने की मांग को लेकर संतो का प्रचण्ड प्रदर्शन : राष्ट्रपति को ज्ञापन सौंपा
Addressing the gathering, Mahant Naval Kishor Das, Secretary General, Delhi Sant Mahamandal said that the structure must be demolished very soon otherwise this protest would be spread statewide and every street of the national capital would witness the same scene to awaken the sleeping governments and the handicapped administration which is allowing our brave security personnel to be beaten but can not take action against anti-social elements.

According to the Media chief of VHP Delhi Vinod Bansal, “Congratulating him for his occupancy as 13th President of the largest republic of the world, a memorandum was also given to the newly elected President of Bharat H.H. Shri Pranab Mukherjee.” In their memo, Saints demanded his immediate intervention in the matter before it could take any ugly shape and seek to direct  concerned authorities for demolition of the structure as well as stern action against those who built it.”