Sabarmati Riverfront to get a walkway, new water rides! 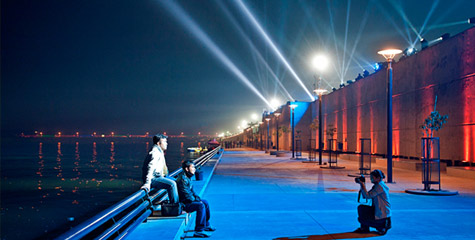 Speaking on the occasion Shri Modi said that while location of this dedicating ceremony is Ahmedabad, the walkway is dedicated to India, because it is the first such project initiated in entire India.

Shri Modi appealed the citizens to maintain cleanliness and use the new location in disciplined manner. He gave example of Kankaria lake front where following his appeal, in last five years, not a single public facility has faced damage. Modi asked people to keep Sabarmati river front more clean than own house.

“The Prime Minister, in his address, said there is a need to attract Foreign Direct Investment (FDI) and also focus on industrialisation for employment generation in the country. He spoke about the need to strengthen infrastructure, but state Congress leaders say just the opposite of it.

“The state Congress leaders were seen on TV saying they don’t need roads, industries, educational institutions, hospitals, universities, and that just half a chapati would suffice for them,” Modi said, implying the party leaders were criticising the BJP Government’s policies aimed at attracting FDI and setting up industries.

Here is some more news that will bring cheer to the faces of people of Ahmedabad!

On Wednesday, 15th August 2012 Chief Minister Shri Narendra Modi dedicated to the people a walk way and rides at the Sabarmati Riverfront.

The AMC has planned to launch ferry service between Vadaj Dadhichi Rushi over bridge to Vasna river bridge. A dream run will be held for runners on the riverfront walkway between Vallabh Sadan and Vasna Barrage and back. The AMC has hosted a grand musical event as well.

Giving a major impetus to tourism in Ahmedabad and particularly the Sabarmati River Front Project, 25 rides will be launched on 15th August at the auspicious hands of Shri Narendra Modi.

In the near future, an amphibious bus service that can be operated on land as well as water will be operational.

The Sabarmati River is the lifeline of Ahmedabad and has always been central to the identity of this booming city. Till a decade ago, however the Sabarmati River running through Ahmedabad resembled a stretch barren land where children played cricket and circuses were occasionally held.

The vision to re-develop the Sabarmati riverfront assumed importance ever since Shri Narendra Modi assumed office in 2001. Today, the Sabarmati Riverfront has become an important cultural landmark on the map of Ahmedabad. From shops, informal markets to hosting International Kite Festivals, its all happening on the banks of the Sabarmati!

In addition the Sabarmati Riverfront has won several prestigious awards including the HUDCO National Award for innovative infrastructure development, the Prime Minister’s Award for the best concept and design of a public project and a National Safety Council of India, Safety Award (Prashansa Patra) in 2006.

Just a few months ago when KPMG declared the Sabarmati Riverfront Project in the list of ‘100 Most Innovative Projects’. KPMG hailed it as a project towards urban regeneration and environmental improvement, which will transform the river as a focal point of leisure and recreation.

Now, with the coming of the walkways and rides, you are further assured of a wonderful treat the next time you decide to venture onto the banks of the Sabarmati…