Lost in the din - Baba Ramdev's plan to save agriculture 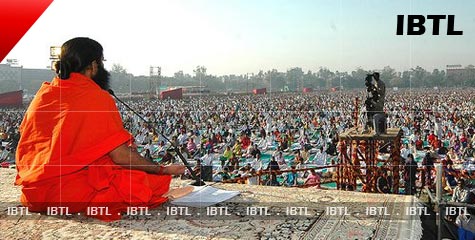 Tens of thousands of people had come to Delhi to support the fast of Swami Ramdev that began on June 4. In the early hours of June 5 (the midnight of June 4/5) Delhi police backed by Rapid Action Force swept on sleeping protestors using teargas and lathi-charge to evict them, asks Dr. Devinder Sharma

Standing on the dais and looking at the sea of humanity that braved the heat of the peak summer season in New Delhi, I wondered what these millions were here for. It had been almost ten hours since the indefinite fast that Swami Ramdev launched and I was trying to read the faces of some of those who I could see clearly from where I was sitting. This was in the afternoon of June 4. The turn of events in the next few hours have put a permanent blot on the face of Indian democracy.

These were poor people. A majority of them came from the lower strata of the society. They were drenched in sweat. They had poured in from distant parts of the country. Some came in trains, some in public buses; some came as part of better organised bus loads. With their bags on their heads or slung on their shoulders, and quite a large number coming with their families, including small children, they thronged to Ramlila grounds in the heart of Delhi with a great sense of hope and determination which was clearly visible on their faces. Victim of continuous apathy, neglect and discrimination, they were born in misery and will probably live all through in misery. Treated like cattle, and shunned by the perfumed class who are more or less beneficiaries of the corrupt system, they had demonstrated their willingness to walk the extra mile knowing well it was going to be really hard and tough.

As I sat there on the stage, I could see clearly the mired expressions on some the faces I tried to scan. The Incredulous India, as the Shining India brigade would normally refer the million to, had arrived.

Besides the contentious issue of getting back the black money stashed in safe havens outside the country, Swami Ramdev had struck a common cord with the masses. Here is one person with whom I have interacted in recent times who I find has a finger on the real nerve of the nation. Rooted firmly on the ground, he has relentlessly called for changes in a manner that would have direct bearing on the deprived millions.

He talked of providing technical and professional education in regional languages, he talked of repealing the draconian land acquisition provisions and also understood how dangerous it would be for not only country’s food security but also the national sovereignty by allowing indiscriminate transfer of agricultural land for non-agricultural purposes.

At a time when the perfumed class chanted the mantra of development — by usurping the natural resources and by displacing the millions – Swami Ramdev talked of empowering the masses. And that is why Shining India in reality hated him, and in lot many ways feared him. Ever since the time I fist sat down with him to discuss what is going wrong with agriculture I found in him someone who was not only receptive but also wanting to understand the complexities and look for viable solutions. To me – and also for him – reviving agriculture and there by empowering the masses is the key to true economic growth, progress and happiness. I could therefore see in him as an amplifier, someone who could carry the message loudly and clearly. He had the strength to demonstrate that another India is possible. He was keen to help provide viable alternatives.

At a time when the State was colluding with the Corporates to take over agriculture and push farmers out of farming, Swami Ramdev emerged as a strong voice in favour of self-reliance. The charter of demands that HRD Minister Kapil Sibal now frowns at actually had a number of such positive elements for transforming agriculture thereby effectively ensuring household food security and minimising hunger and poverty. It was after a lot of deliberations that Swami ji had narrowed down a vast plethora of issues to some salient features that needed immediate attention. These set of interventions were included in the list of demands that Swami Ramdev had sent to the Prime Minister.

The first set of demands pertained to land acquisitions. Primarily, the demand was for not allowing agricultural land – whether it is mono-cropped or multicropped – to be diverted for nonfarm purposes. Even where it is to be definitely acquired given the nature of public utility, permission has to be sought from the Gram Sabhas. It was pointed out very clearly that already the country is in the throes of a crisis given that the demand for food is requiring more area to be maintained under agriculture. For instance, it was pointed out that if India was to grow domestically the quantity of pulses and oilseeds (in the form of edible oil) that are presently imported, an additional 20 million hectares would be required.

Preserving productive agricultural land for cultivation therefore assumes utmost importance. In the United States, the US government is providing US $ 750 million for the period 2008-13 under the Farm Bill 2008 to farmers to conserve and improve their farm and grazing lands so as to ensure they do not divert it for industrial and private use. On the contrary, India is in a hurry to divest its farm lands and turn them into concrete jungles in the name of development.

India is faced with a terrible agrarian crisis. The serial death dance across the country, with over 2.5 lakh farmers already committing suicide, shows no signs of ending. Much of the crisis is because of the unsustainable farming practices that have turned the Green Revolution to a Gray revolution. Reviving agriculture and restoring the pride in farming form the two most important planks of any nationwide strategy to revitalise the rural economy. The following are some of the key elements of the farm strategy and the immediate approach that needs to be followed:

# Knowing that GM crops / foods pose serious environmental and health hazards, Swami Ramdev had asked for a 10-year moratorium on Bt-Brinjal and all field trials and commercial release of GM crops. The basic purpose is to ensure that the biotech industry is not allowed to contaminate the environment and thereby destroy the biodiversity that is available. He had also demanded that facilities for 29-biosafety tests that the Supreme Court nominee on the Genetic Engineering Assessment Committee (GEAC) Dr Pushpa Bhargava had called for be first ensured before any GM crop/food is allowed for commercial release.

# Seed is emerging a major issue of contention for farmers. Over the years, the government has facilitated the takeover by private industry of the seed supply and trade. This has taken away the control of farmers over their seed. Although there were a number of suggestions and approaches that we discussed, finally Swami Ramdev included two major areas of focus in relation to seed. First was the need to regulate seed price considering that industry continues to fleece farmers by charging exorbitantly. Secondly, every district should have a community-controlled seed centre with a gene bank for traditional seeds. The local available seed diversity needs to be protected and conserved at any cost.

# A beginning could also be made by ensuring that in the proposed 12th Five Year Plan at least a target to convert 25 per cent of the total agriculture area be fixed for converting to zero pesticides use. Already 40 lakh acres in Andhra Pradesh has been brought under non-pesticidal management by under a government programme and this could be replicated across the country.

# A National Sample Survey Organisation (NSSO) survey had concluded that the average monthly income of a farming family in India does not exceed Rs 2400. No wonder, more than 40 per cent farmers have expressed the desire to quit farming if given an alternative. Because of the dwindling farm incomes more and more agrarian distress is becoming visible. A Farmers Income Commission therefore needs to be setup and income guaranteed to the farmer under a Farmers Income Guarantee Act (FIGA).

# It is strange paradox that while 32 crore people go to bed hungry every night foodgrains continue to rot in storage. A centralised procurement & distribution network has failed to ensure that food reaches those who need it most. Suggesting for local production, local procurement & local distribution, community grain storage banks need to be established in every panchayat. This will not only minimise grain wastage but also ensure that food reaches the
hungry.

# Education in the Agriculture, Health and Engineering Sectors should also be in Hindi and other State languages. I don’t think any political party or the common minimum programme of the successive coalitions that ran the country has ever projected such a comprehensive agricultural and rural economy plan. Unfortunately, amidst the din and noise created over black money and corruption, the proposals to revitalise the rural economy by strengthening agriculture were simply ignored. The nation therefore lost a historic opportunity to debate and deliberate on some worthwhile approaches that could usher in self-reliance in agriculture and put an end to farmer suicides.