Why namaskar, not hand shake : Spiritual benefits of namaskaar 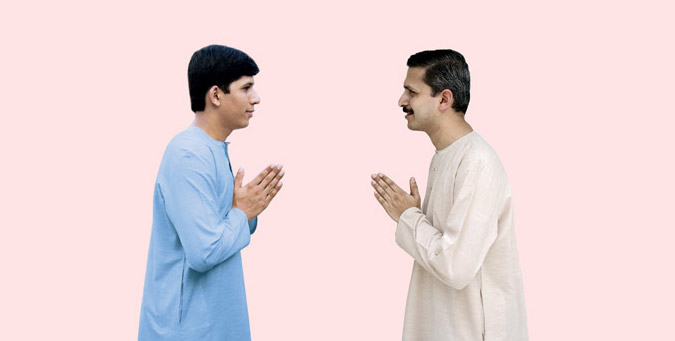 There are several ways in which people pay obeisance (namaskar or salutation) to the divine. Various types of hand actions or postures accompany prayers or obeisance. Some people hold up their hands as in asking, while others bring their fists together, while yet others may pray with hands folded, as seen above. Hindu Dharma recommends the above shown posture for prayer or paying obeisance (namaskaar) to the divine; for the simple reason that it is the most scientific way to attract the divine consciousness (chaitanya) from God towards oneself. This article discusses the spiritual significance and benefits of namaskaar.

Origin and the meaning of the word 'Namaskar' : The word 'namaskar' is derived from the root 'namaha,' which means paying obeisance or salutation. In the Hindu Science of Justice (Nyaayashaastra), 'namaha' is a physical action, expressing that 'you are superior to me in all qualities and in every way.' The main objective of doing namaskaar to someone is to derive spiritual as well as worldly benefits.

Worldly benefits : By doing namaskaar to a Deity or a Saint, unknowingly, their virtues and capabilities are impressed upon our mind. Consequently, we start emulating them, thus changing ourselves for the better.

• Increase in humility and the reduction of ego : While doing namaskaar, if one thinks, 'You are superior to me; I am the subordinate; I do not know anything; You are Omniscient,' it helps in reducing the ego and increasing humility.

Nowadays, it is common to greet each other with a handshake, especially in the West. It is considered a gesture indicating formality or even warmth. However, some Hindus greet each other by paying obeisance through the namaskar mudra. Here we have explained why namaskar is beneficial spiritually and how the handshake can be detrimental.

Some spiritual benefits of namaskaar : While visiting places of worship and viewing (taking darshan of) the Deities, or while meeting an elderly or respected person, Hindus' hands automatically join in obeisance (namaskaar). Namaskaar is a sattva predominant gesture befitting the rich heritage of the Hindu culture. Namaskaar is a simple and beautiful expression of divine qualities like devotion, love, respect and humility that endows one with Divine energy. Understanding the spiritual science behind a religious act (Dhaarmik kruti) like namaskaar helps in further strengthening the faith in this religious act.

Why is it spiritually detrimental to shake hands? : Nowadays, perhaps due to ignorance about the science of Spirituality underlying Hindu Dharma, or due to the increasing influence of Western culture, people often shake hands to greet each other. In a handshake, the spiritually impure raja-tama components in one person can be transferred to the other person, thereby reducing the latter's spiritual purity (sattvikta). In addition, if any of the two persons, greeting each other is affected by distressing energies, their distress can affect the other person through the handshake. In comparison, every action and concept in the Hindu Dhaarmik way of life, such as greeting with a namaskaar, facilitates an increase in our spiritual purity.

Lately very few people realize the spiritual significance of namaskaar. If at all they do namaskaar by joining their palms, it is done just as a formality. As the act is not based on faith, the benefit derived from it is minimal. Hindu Dharma recommends that along with faith, every religious act be performed according to the science of Spirituality, so that it gives complete spiritual benefit.