Mahashivratri: The Spiritual science and the Divine Knowledge 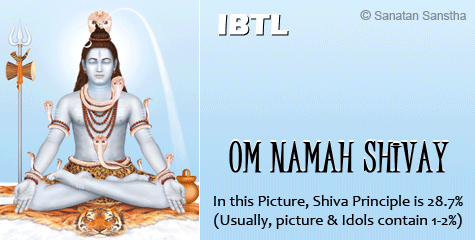 Introduction : The festival of Mahashivaratri is celebrated on the 14th day of the dark fortnight of the month Magha, as per the Hindu lunar calendar. The Shiva principle is most active on this day of the year.

When Lord Shiva is resting the work of the Shiva principle stops,.During this time since the Shiva principle is inactive, the overall tama component and restlessness in the universe i.e. the pressure of the distressing energies increases. The effect of these energies is reduced by offering bel leaves, white flowers, rosary of rudraksh etc that attract the Shiva principle from the atmosphere. Basically on this day by offering such items we increase our sattvikta to combat increased negativity around.

Hindus observe a strict fast on this day; some devotees do not partake of even a drop of water. In observance of Maha Shivratri people repeat the Panchakshara mantra namely - ‘Om Namah Shivaya’ through out the night.

2. Ganga (The Holy water) - The snakes removed the obstacles in the flow of dyan-ganga (river of knowledge) from the tip of Shiva’s head and so are called as ‘Brahman’: Lord Shiva always lives in austerity (does tapasya). The knowledge attained by Lord Shiva flows from the tip of His head in the form of river of knowledge into the universe. The snakes removed the obstacles that obstructed the flow of knowledge. As the snake helped a lot to keep an unobstructed flow of knowledge they are known as ‘Brahman’ (The God principle).

3. Chandra (Moon) - The Universe cannot bear the heat produced due to the process of receiving knowledge. As per the need, the moon spreads cool-waves in the universe and reduces the speed and intensity of the heat waves thus protecting the universe. Due to this reason to balance out the heat in the universe the moon is positioned on the right side of Lord Shiva.

4. Science behind the miracle (phenomenon) of Saints producing Bhasma (Sacred Ash): The Bhasma or Vibhuti that comes out of saints palms also contain the waves of Lord Shiva: ‘Sometimes Bhasma or Vibhuti comes out of palms of few saints, which means at that time saints go into Shivadasha (The state of being one with God (Shiva), the state of pure non-duality. This is the highest spiritual experience) and before going into Shivadasha they pray for Bhasma or Vibhuti to come out of their hands. When they go into the Shivadasha at that time a few layers of their palm get burned and bhasma is formed out of it. New layer of skin is immediately formed to replace the burnt layer of skin. While this is happening the Saints do not feel anything. The Bhasma formed in this way has some power of waves of Lord Shiva. So, that bhasma is called as ‘Shiva-Bhasma’. Nowadays the bhasma is called as ‘Vibhuti’. Bhasma has a divine fragrance and it relieves us from the troubles of distressing energy. (Shri Satya Sai Baba generates Vibhuti from His hands. –Compiler.)

5. Trishul (weapon of Lord Shiva): It has three tips but one main stem. The power of the three tips of Trishul is in the main stem, means that the Trishul is designed according to the principle ‘Many to one.’

6. Rudraksha (Seeds of Rudraksha tree)  - Intention of Lord Shiva behind adorning the rudraksha: Lord Shiva is always in the state of Samadhi (A super-conscious state of meditative union with the Absolute (God principle). His work is always done through the subtle. For His work to be carried out in a proper manner He has adorned garland made out of Rudraksha. Due to this while worshipping Lord Shiva Rudraksha is given lot of importance.

Functions of Lord Shiva : The word Shiva (when its syllables are transposed), has its origin in the word 'Vash'. Vash means to enlighten; thus, one who enlightens is Shiva. Lord Shiva is absolute, self-radiant and illuminates the universe. Lord Shiva is also called Mahadev or Supreme God, since He possesses all the three principles – Absolute Purity (pavitrya), Absolute Knowledge (gnyana) and Absolute Spiritual Practice (sadhana) – underlying the Creation of the universe.

1) Creation of the universe: Lord Shiva can create the universe merely by His resolve (sankalpa). Shiva-Parvati are called the parents of the world.

2) Master of the universe (Jagadguru): It is said that one must seek knowledge from Lord Shiva and Liberation from Lord Vishnu.

Attributes and Functions Of Shiv-linga  :

The energy may be unbearable to the Jiva (embodied soul), hence Shivapindi is usually located parallel to the ground or under the ground. The temperature around the area of Shivapindi is high and heat is experienced because of its constant emission of radiance and energy. For this very reason constant flow of water is maintained on the top of it. Some proportion of this water is absorbed in the Shivapindi.

Jyotirlinga (Jyoti means a flame and linga means form) are the Shivlinga that are evolved on its own thus are called swayambhu, It emits radiance of Shiva principle and the energy on a greater scale, because these lingas are created with the resolve of Lord Shiva. They manifested before the devotee and after their discovery their worship begins. On the day of Maha shivratri, the emission of Lord Shiva frequencies increases by 30%.  There are twelve Jyotirlingas in India at Somanath, Mahakal, Kedarnath, Kashi Vishweshwar, Omkareshwar, Trayambakeshwar, Ghrushneshwar, Bhimashankar, Naganath, Vaijanath, Mallikarjun and Rameshwar.

1. Shivapindi emits frequencies of Knowledge (dnyan), devotion (bhakti) and detachment ( vairagya). On the day of Mahashivratri this transmission increases by 30%.

Shivapindi emits subtle frequencies of divine consciousness, bliss and peace. On the day of Mahashivratri this transmission increases by 25%. This leads to purification of the subtle body of the individual paying a visit to Shivapindi on this day and helps in activation of sun channel or sushumna (middle) channel as per the requirement. This helps in increase in the sattva guna and divine consciousness.

Due to nirgun (unmanifest) principle of Lord Shiva emitting from Shivapindi and also due to emission of peaceful frequencies, the area around the shivapindi remains cool and the mind becomes peaceful.

In the Shivapindi all the principles of Lord Shiva namely Nirgun, Nirgun-Sagun, tarak and marak co-exist. Therefore the jiva-paying obeisance, receives the particular principle as per his requirement.  When one gains the marak energy emitted from Shivapindi, the temperature increases and one experiences bliss. Similarly when one gains the nirgun (unmanifest) principle of Lord Shiva emitting from Shivpindi one feels cool and experiences bliss and peace.

2. Rudraksha: The devotee wears a rudraksha bead mala while worshipping Lord Shiva. The rudraksha is red in color with yellow stripes and its shape is flat like that of a fish. On one side of each bead is a slight opening, which appears like an open mouth. The rudraksha converts the divine light frequencies into the sound frequencies in the human body and vice versa.  Hence, the rudraksha facilitates the absorption of divine frequencies and transformation of one's thoughts into divine language, so as to reach one's divine Principle of worship.

Rudraksha absorbs sattvik frequencies and emits similar frequencies from its mounds. When a genuine rudraksha is held in the hand, its vibrations can be felt in the fingers. At that time, the body is absorbing the sattvik frequencies emitted by the rudraksha.
Now a days fake rudrakshas too are available in the market. To differentiate between a fake and the genuine rudraksha one can do a simple test. When kept in water, the fake ones get discolored since they are colored by keeping in an astringent extract.

3. Bel leaf: One of the main components in the Shivalinga’s ritualistic worship is Bel leaf. The scientific reason for offering bel leaf to Lord Shiva is because it emits 2% of Shivtattva. The proportion of Shiva principle emitted from Bel leaf is as shown in this slide.

4.  Chanting of the Mantra, ‘Ohm Namah Shivaya’ : The chant is available for Download on

Let us see where to sit while worshiping Shiva linga : While worshipping the Shivalinga one can sit at any of the points from 1 to 7.  But one should not sit at point 8 shown in the figure. From this point the frequencies of divine energy are emitted and the Jiva performing the ritual may not be able to bear the frequencies of energy.  Also, the frequencies can have adverse effect on the jiva.

The performance of ritualistic worship done with spiritual emotion awakens the hidden subtle Shiva principle. Lord Shiva in subtle, receives the holy sacrament of rice flakes (lahya) and milk, which is offered to Him. In subtle Deities consume holy sacrament (food particles) in the aerial form.

Circumbulation : Circumbulation around the Shivalinga should begin from the left side, till the Shalunka's extended outlet, through which the continuous stream of water (abhishek) flows. Then one turns back without crossing the starting point and completes the circumbulation in the reverse direction.

The reason for not crossing the extended portion of the shalunka is that the energy flow at that point has an adverse effect on the production of semen and the five internal vital energies namely Pran, Saman, Apaan, Udan and Vyan in our body.

Prayer:  ‘Hey Lord Shiva, let me (your name) be able to absorb the manifest energy, in subtle and gross form emitting from you. Give me ability to sustain the energy generated from the chant, ‘Ohm Namah Shivaya’, Let this energy be utilized in the mission of establishment of righteousness’ as my (your name) spiritual practice.’- Shree Ganesh Principle

Summary : The Symbol of Lord Shiva, the Shivalinga (lingam), represents the formless God principle (Shiva) and it is worshiped with great splendor during Maha Shivaratri. While bathing the Lingam one can maintain the spiritual emotion that may it wash all my sins, so that the scorching fire of worldliness may be put out once for all and that I remains focused on God (Shiva) always.

MahaShivaratri implies the spiritual union of the seeker or the embodied soul doing spiritual practice (Jivatma) with the God principle (Shiva or Paramatma). It is a reminder to every seeker to attain the high state of God-realization or lasting Bliss.

Thus, the observance of MahaShivaratri should be performed with the understanding that though symbolic or ritualistic, it is an endeavor to progress to The Real or The Truth (God).

Related links :
# Correct method and science of doing Namaskar to God
# Why namaskar, not hand shake: Spiritual benefits of namaskaar