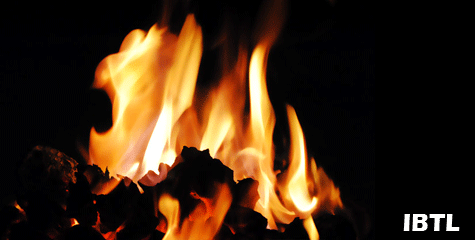 Arnab Goswami takes on Ashutosh and Aam Aadmi Party
1. Introduction : Holi is celebrated from the full moon day (pournima) of the Hindu lunar month of Phalgun till the fifth day (panchami). Depending on the regional variations in India, it is celebrated from two to five days.
It is a festival of radiance (tej) in the universe. During this festival, different waves of radiance traverse the universe, thereby creating various colours that nourish and complement the function of respective elements in the atmosphere.
2. Ritual of Holi celebration : In this festival main emphasis is laid on the burning of Holika or lighting of Holi. According to some scholars this is probably a remnant of the tradition of fire worshippers. However one should not light Holi during the day.
First the doer should purify himself and pronounce the resolve "I am performing the worship along with my family to overcome the trouble of the demoness."
Cow-dung cakes and a few wooden logs should be piled on the ground that has been cleaned and decorated with rangoli.
The fire should be lit while chanting mantras. After the fire is completely burnt, it should be extinguished by sprinkling milk and ghee.
Holy sacrament (naivedya) of sweets should be offered; then a prayer should be made thus - "May we get energy to strive for the protection of the Nation and Dharma."
Fruits like coconut, grape fruit should be distributed to people who have assembled there. The entire night should be spent in dance and song.
The next day after a lot of obscene talk the ashes of Holi should be immersed.
Why this obscene and foul language should be used is explained as follows - The lunar asterism purva phalguni is present on the full moon day (pournima) in the bright fortnight of Phalgun. The Deity of that lunar asterism is Bhag. The common meaning of Bhag is reproductive organs, the female sex organs. Thus there should be an outcry in the name of Bhag. This is a type of worship by itself. One must realise that it indicates honour of the deity. In some places it is customary to smear the body with substances like ash, cow dung and mud and indulge in dancing and singing.
3. Subtle drawings of Holi ritual

4. Do's and Don'ts of the Holi celebration
• Burn dry wood instead of wet wood.
• Do not steal wood for Holi fire.
• Celebrate Holi keeping in the mind it's purpose of uniting the Hindus.
5. Celebration of Dhoolivandan : Dhoolivandan is celebrated on the first day (pratipada) on the dark fortnight of the Hindu lunar month of Phalgun.
On this day either the ashes of Holi or dust is worshipped. After ritualistic worship it is offered obeisance with the following mantra which means as,"O dust (dhooli), Brahma, Vishnu and Mahesh salute you, hence O deity of the elements, grant us opulence and protect us." Thus Dhoolivandan is a worship of the destroyer form of the Deities
6. Celebration of Rang Panchami : It is celebrated on the fifth day (panchami) of the dark fortnight of the Hindu lunar month of Phalgun by throwing a red, fragrant powder (gulal) and splashing coloured water, etc. on others.
Let us stop immoral practices during this Rang Panchami and protect Dharma
In present times, there are a lot of malpractices taking place in the name of celebrating Holi. Similarly, on the day of Rang panchami, people indulge in malpractices such as - throwing balloons filled with dirty water, applying dangerous dyes and colours to the body, etc. These malpractices harm Dharma, and hence, putting an end to them is our religious duty. Spread this word in society and even after doing so, if you come across such incidents, lodge complaints with the police.
• Don't apply colours forcibly. Stop people from doing so & give them the reasons.
• Stop those who extort money from people on the roads.
• Stop beggars from wearing masks of Deities.
• Stop people from using excessive colours and hurling water balloons.
• Do not use harmful chemical colours.
• Celebrate Holi in the traditional way!
Recently, citing reasons of deforestation, Anti-Dharmik Organisations like the Andha-shraddha Nirmulan Samiti (ANIS) have been giving wrong advice to society, to use garbage to light the Holi fire. One should not light the Holi fire with garbage, since it pollutes the environment. Rather, if Holi is celebrated with the bhav (spiritual emotion) of worshipping the Deity Holika, the atmosphere will become sattvik.
But did you ponder over this?
There is wide scale deforestation throughout the year on account of felling of trees for construction purposes, production of paper and other activities backed by man's selfish interests. However, so-called environmentalists ignore this and wake up from their slumber to create a hue and cry over the felling of trees on Holi, a religious occasion for Hindus that is celebrated once a year. Their contention is that 'trees are cut during Holi, which causes damage to the environment.' They also make fake appeals like - 'Burn (eradicate) evil thoughts in the fire of Holi' or 'Burn garbage in the fire of Holi.' Do not fall a prey to such lame excuses; but celebrate Holi and Rang Panchami as prescribed by Hindu holy scriptures and use natural colours.
Dry wood should be used instead of felling good trees to light Holi fires. Also, the basic objective of celebrating Holi is to forget differences and come together. If people bear this in mind and celebrate the festival, they can save wood by having just one sacrificial fire of Holi for the entire village or locality instead of each group separately burning wood for Holi. When Holi is celebrated, as per traditional practices, it is essential that sanctity of the religious practice be maintained. Sanctity will be lost if dirt and garbage is used for the sacrificial fire of Holi.

Related links :
# Ritual of Waving Lit Lamps (Aarti) - A Spiritual Perspective
# Correct method and science of doing Namaskar to God
# Why namaskar, not hand shake: Spiritual benefits of namaskaar
# Arrangement of Deities In Temple Room and Queries about Aarti