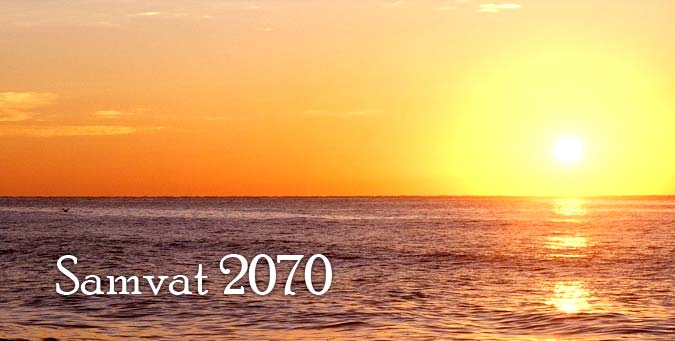 1. Introduction : The holy festival which marks the beginning of the New Year, new month and new day for Hindus, falls on Chaitra Shukla Pratipadā (the first day of the bright fortnight of the Hindu lunar month of Chaitra). It is known as Gudhipadwa (Maharashtra) or Yugaadi (Ugadi) (Karnataka and Andhra Pradesh) in India. On this very day God Brahmā created the Universe. Therefore for Hindus, this day carries special importance. The day is celebrated with an auspicious bath, followed by decorating the main door with a garland (toran), performing ritualistic worship and hoisting the flag (DharmaDhwaj or Gudhi).

2. Significance and meaning of Gudhipadwa : The word Padva is derived from two syllables, Pad + Vaa.

Pad - Means tending towards perfection or maturity.
Vaa - In spirituality, the word 'Vaa' indicates that which increases growth.

3. Scriptural view of Gudhipadwa (Chaitra Shukla Pratipadā) : After every cosmic vibration a new universe is created, that day is Gudhipadwa. Initially Earth was entirely covered by water. Then, at the beginning of what we now call summer, the Sun deity started his penance. His radiance increased manifold due to the power of his penance. When the Sun deity finished his penance, one fourth of the water on Earth had been evaporated. The time taken for that is called the summer season now. Thereafter the Sun Deity reverted to his original state i.e. the amount of heat became progressively less. As the water evaporated, it released a number of different gases which formed the atmosphere. Then, on the same day, from the interior of the earth, green land laden with trees and vines, rose up smoothly. Thus, the day on which God Brahmā created the Universe, is known as Gudhipadwa.

4. Significance of the special flag (DharmaDhwaj) : On this day a small round pot is inverted and kept on top of a bamboo stick. This is ritualistically worshipped and hoisted as a flag which is known as the DharmaDhwaj (as shown in the picture). The stick represents the spine and the pot represents the human head. The bamboo also has 'vertebrae,' like the human spine. In the human body, the head, which is of the shape of zero and the spine (vertebral column), are important organs. Another representation is the sperm of a human being which similar to the shape of the number one (1) in Devnagari script. The implied meaning of the components of the flag (DharmaDhwaj)

5. The ideal time to hoist the flag (DharmaDhwaj) : On this day the Prajāpati frequencies and absolute fire element (Tējtattva) are active on a large scale. The divine consciousness (Chaitanya) transmitted through these frequencies at the time of sunrise, is long lasting. It is stored in the cells of an individual and is utilized later, as per ones need. Therefore the flag (DharmaDhwaj) should be hoisted and worshipped within 5 to 10 minutes following sunrise.

6. Importance of the substances used for hoisting the flag (DharmaDhwaj): Importance of mango leaves, The proportion of the spiritually pure (Sattva) component is more in mango leaves compared to other leaves and hence they have more capacity to attract the Divine Principle. The mango leaves are tied at the tip of the flag (DharmaDhwaj). Tender mango leaves are recommended rather than fully mature ones as the capacity of the tender leaves to attract divine frequencies is 30% compared to 10% in mature leaves. The absolute fire element principle (Tejtattva) is also more in tender leaves and hence they should be the ones used in ritualistic worship.