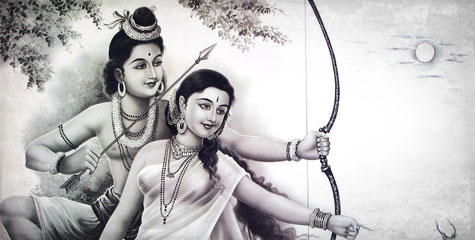 Introduction: The birth of Lord Rama, the seventh Incarnation of Lord Vishnu, in the Tretayuga is celebrated on this day - the ninth day in the bright fortnight of the Hindu lunar month of Chaitra. Whenever righteousness is in danger God reincarnates to protect and reinstate the righteousness in the society. He destroys the evil doers and protects the seekers. In Tretayuga a very powerful, unrighteous king Ravana had reached the height of unrighteousness. So to destroy Ravana, Lord Vishnu incarnated as Rama in the Sun dynasty (Surayavansh) of King Dashratha. Since then this day is celebrated as Ramnavami.

Importance of the day as per the Science of Spirituality: On the day of Ramnavami, Shrirama principle is 1000 times more active than on any other day of the year. When certain principle is active, if one does the chanting of the same principle; one benefits the most. Hence it is recommended to chant ‘Sree Rama Jai Ram Jai Jai Ram’ on this particular day.

Why Lord Rama is considered an Ideal: Lord Rama is an example of the ideal son, brother, husband, king, friend and enemy.

The Ideal son: Always obeyed His parents; at times even advised the elders. For instance when he was leaving for the forest He advised his parents not to grieve for him.

# Rama-Lakshman's love is cited as the ideal of brotherly love.
# Devoted to His one and only wife. Kings, then, use to have many wives.
# Helped Sugreev, Bibhishan and many others during their difficult times.
# Followed all codes of conduct for Kings as laid down in scriptures.
# Bibhishan refused to perform the last rites of Ravan, his brother. Lord Rama said to him, 'If you dont do it, I will. He was my brother too!'
# Maryadapurushottam, represents the Supreme extent of Righteousness.

Killing of Ravana: Ravana was highly learned and possessed knowledge of Righteousness (Dharma). But Ravana’s conduct was unrighteous. Lord Rama had to destroy him, so that He could protect the embodied souls doing spiritual practice. Lord Rama acquired a gross body to help the souls pursue their spiritual aspirations appropriately.

To set an ideal for the people: Lord Rama set an example through each and every action of His. He explained how an embodied soul can attain Final Liberation by acting in accordance with the scriptures.

He set an example of a Divine Kingdom for the people: When Righteousness (Dharma) manifested in the gross, Unrighteousness (Adharma) also manifested in the gross. Many embodied souls started troubling Sages and others who acted in accordance with the scriptures. During that time Lord Rama protected the Sages and set an example through His own deeds for all kings, as to how a Divine Kingdom should be. Lord Rama is an ideal of how selfless, free from desire and impartial a King can be!

The Ramayana in our lives: The real kingdom of Lord Rama dwells within oneself. The implied meaning of this is absolute control over the five sense organs, five motor organs, mind, subconscious mind, intellect and ego by the Rama principle- the Soul within.  While Atmaram is the soul principle, Sita is the Great Illusion. Lakshman alludes to the focus on the soul,    instead of the worldly. Bharat signifies a seeker engrossed in worship of radiance. Shatrughna is one who destroys the six foes (Shadripus) of the soul. Rama, Sita and Lakshman together stand for spiritual knowledge devotion and detachment respectively. Hanuman is the activated Kundalini. And Ravana signifies six foes of the soul - Desire, anger, greed, attachment, vanity and envy.

Worship of Lord Rama: Once the stage of worship of the divine principle or deity according to one's religion is completed, the Spiritual practice (worship) of Lord Rama is useful for many seekers to go from many to one. This is because of Lord Rama's attributes of being true to His word, devoted to only one wife and attaining the target with just one arrow.

Ritualistic worship (puja): Since Lord Rama is an incarnation of Lord Vishnu, He, too, is worshipped like Vishnu in sixteen steps (shodashopachar puja). Tulasi (sacred and medicinal plant found in India) leaves are essential for His worship. Tulasi has the ability to attract the subtlest pure particles (pavitrakas) of Vishnu. It is even better if one can use Lotuses for the worship. Khir (a sweet delicacy made from milk and rice or vermicelli) or shira (a sweet delicacy made from semolina, pure ghee and sugar) is Lord Vishnu's favourite sacrament (naivedya). Choosing the substances offered in the worship according to the science of Spirituality helps generate divine consciousness (chaitanya) in the statue, so that it aids one's spiritual progress.  During this period of 9 days, devotees do periodical reading of Ramayan, recite the Ramarakshastotra, sing bhajans-kirtans in His praise and chant His name.

Several temples of Lord Rama celebrate this festival for nine days, beginning from Chaitra Shukla Pratipada. It is celebrated by periodic readings of the Ramayan, organizing and attending spiritual discourses (kirtans) and beautifully embelishing Lord Rama's statue. During these nine days, reciting the Ramaraksha prayer (stotra) eleven times daily with a resolve (sankalpa) brings the prayer to fruition, yielding benefits like reduction of speech impairment and other ailments, and gaining prosperity. On the ninth day, that is, on Shri Ramnavami a spiritual discourse on Lord Rama's birth is held in the afternoon. At noon, a coconut, draped in a hooded cloak is placed in a cradle and rocked. The coconut signifies the baby Lord Rama. A red, fragrant powder (gulal) and flowers are showered onto it.

Let’s celebrate Shri Ramnavami and pray to Shri Rama together, “O Lord! Please guide us to imbibe the Divine Qualities and help us to go to the higher levels of Spiritual Practice as per the Science of Spirituality.”